All good things must come to and end, and in this case, “good things” = the 2020 Tokyo Summer Olympic Games. Obsessing over USA’s Women’s Gymnastics team, becoming oddly invested in the performance of that now-iconic sharpshooter, and debating whether the beds in Olympic Village were actually sex-proof was just so fun, but the games end in three (3) calendar days on August 8…which means the official Closing Ceremony is right around the corner!

Like the Opening Ceremony (um, remember how freakin’ pretty that was?), the Closing Ceremony will be full of fan fare, pretty lights, and celebrated athletes, but this time, it will be marking the end of the Olympic Games this year. Here’s what we can expect from the Closing Ceremony—and most importantly, when it airs!—below.

When does the Closing Ceremony air?

The most important info first, obvi. NBC is set to air the ceremony live on Sunday at 7 a.m. EST on August 8. Too early for ya? No worries—the channel will rebroadcast the Closing Ceremony at 7:30 p.m. EST for those of us who can’t wake up at the crack of dawn to watch it in real time. So generous.

Are there any sports still being played on Closing Ceremony day?

Yes, because there’s no rest for the athletic! There will still be matches for volleyball, boxing, men’s marathon, and the men’s water polo final on Closing Ceremony day. Men’s water polo (which airs at 4:30) marks the last event of the day, so when the final goal is scored, the ceremony will start a few hours later at 8 p.m. local time in Tokyo. 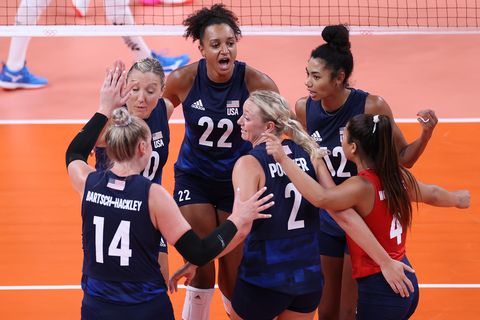 Are fans allowed to attend the Closing Ceremony?

Sorry, but we won’t be seeing fans (or anyone else, really) at the Closing Ceremony. Due to COVID-19, the International Olympic Committee banned friends, family members, and general spectators from attending the Olympic Games this year. The people we can expect to see are the athletes and the performers, of course.

What will happen at the Closing Ceremony?

There are TONS of fun happenings at the Closing Ceremony. We’ll get to see parade of the nations’ flags, the final medals of the Games being handed out, the victory parade (always a treat) and the lowering of the Olympic flag and handing-over of it next city hosting the Games (that’ll be Paris for 2024!) before the Olympic flame is extinguished.

And we have a theme for the Closing Ceremony! According to the Games’ organizers, the theme is “Worlds We Share,” which they say symbolizes the spirit of the Olympics and “expresses the idea that each of us inhabits their own world.” Can’t wait to watch and weep!