With WWE Evolution less than a week away and WWE Crown Jewel not long after, it’s been a stormy time in the E of late.

Pushing that all to one side, on Monday Night Raw the locker room and WWE Universe joined together in a show of dignity and respect for Roman Reigns as he announced a leave of absence. 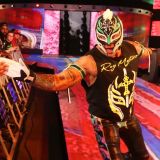 Read on to find out six things we learned on a legitimately heartbreaking night in wrestling history.

Some things are bigger than wrestling.

Last night Roman Reigns stripped away everything, including his hard-won WWE Universal Championship, and revealed that he is battling leukaemia.

He told fans that he had previously had the disease, but although it had been in remission since 2008, the cancer had returned.

It’s hard to know what to say in times like these, so we’ll let him speak for himself:

“It’s a lie because the reality is, my real name is Joe and I’ve been living with leukaemia for 11 years and unfortunately it’s back. I’m not going to lie, I’ll take every prayer you can send my way, but I’m not looking for sympathy, I’m not looking for you to feel bad for me because I have faith.

“When I was 22 years old I was diagnosed with this. And very quickly I was able to put it in remission. But I’m not going to lie, that was the hardest time of my life. I didn’t have a job, I didn’t have any money, I didn’t have a home and I had a baby on the way and football was done with me.

“But do you want to know who gave me a chance? The team that gave me a chance was the WWE. And when I finally made it to the main roster, I was on the road and they put me in front of you, the WWE Universe, and to be honest you all have made my dreams come true.

“Life’s not always fair, it’s not all peaches and cream. Sometimes life throws you a curve ball. And right now, the best thing for me is to go home, focus on my family and my health.

“Because I will beat this, and I will be back and you will see me very, very soon. Once again thank you so much, god bless you and I love you. Believe that.”

Despite Roman Reigns’s heartbreaking announcement, the show must go on.

And that means we need to find a new WWE Universal Champion.

Given that Reigns was booked for a Triple Threat match to defend the gold in Saudi Arabia, it was pretty clear how things would be resolved.

The two other men in that fight will go at it one-on-one. Beast vs Monster. Brock Lesnar vs Braun Strowman for the vacant WWE Universal Championship.

It’s a horrible, horrible way for this situation to come up, but as a meaty battle it should be a stormer.

Paul Heyman paid his respects to the outgoing champ, before building up his man as a future WWE and UFC champion.

Braun Strowman wasn’t having any of it, and suggested that it wouldn’t be some part-timer who’d step into the Big Dog’s shoes.

But having burned his bridges with the pack last week, his actions came back to boot him, hard, as Drew McIntyre gave him a Claymore to remember.

Not only will Braun not have the pack at his side in Saudi Arabia, he may have to keep watching his back for them.

With the goal of honouring Roman, Seth Rollins and Dean Ambrose took on Dolph Ziggler and Drew McIntyre with the WWE Raw Tag Team Championship on the line once more.

This time, competing as The Shield, Seth and Dean did their brother proud, picking up the win and the straps, albeit with a little help from a rampaging Braun Strowman, who had tasted that aforementioned Claymore from Drew earlier in the night.

But that wasn’t the end of things.

Whether it was the events of 2014 finally coming home to roost, or the weeks of pressure building up, or the overload of emotion on a night of sadness, Dean Ambrose finally snapped.

He hit two Dirty Deeds on Seth. One in the ring, and one on the concrete outside it after a methodical beatdown.

Where both men go from here is unclear. They’re still WWE Raw Tag Team Champions, but without the glue of Roman Reigns, it looks like The Shield are once again no more.

4. WWE Crown Jewel is still going ahead, and the Brothers of Destruction vs D-X still looks like headlining

As the real-life fate of killed journalist Jamal Khashoggi becomes more clear, the WWE is facing increasing pressure to cancel, postpone or move its WWE Crown Jewel event, due to take place in Riyadh, Saudi Arabia on November 2.

Yesterday on Monday Night Raw, HBK and Triple H were confronted once more by The Undertaker and Kane.

“Pride goes before destruction and arrogance precedes the fall. Your arrogance will be the vessel of your total annihilation.”

That was the message from the Brothers of Destruction, but it feels like that’s a sledgehammer that can swing both ways in Riyadh.

5. The Riott Squad will take on the Boss ‘n’ Hug Connection (plus Nattie) at WWE Evolution

The build to WWE Evolution has been clumsy to say the least.

After the historic announcement from Stephanie McMahon, there was precious little in the way of matches being booked or even built, until the last hurried week.

The return of Sasha Banks and he alignment alongside Bayley has seen the duo rushed into a match against The Riott Squad.

Natalya will join the Boss ‘n’ Hug Connection to even out the numbers, and well, that’s where we are.

On last night’s show, the Squad helped out their matriarch pick up a confidence-boosting singles win against Sasha, the momentum is obviously with the Squad against a somewhat rusty and makeshift trio.

If the Boss ‘n’ Hug Connection (and Nattie) can’t get it together to win on Sunday, we wouldn’t be the least bit surprised to see Sasha turn on her pals.

Or maybe it’ll be Bayley who breaks, reigniting the feud that threatened to properly catch so much earlier this year.

6. Ronda Rousey vs Nikki Bella gets signed and sealed, while their next challengers look on

The Reality Era feuding continued as Ronda Rousey and Nikki Bella got that contract signed for their WWE Raw Women’s Championship match at WWE Evolution.

Nikki brought up Ronday’s pair of defeats in the Octagon before giving the champ a slap clean across the chops.

The Ronda Rousey who came into the WWE all a-flurry of emotion would have likely lost it at that point, and done herself a disservice.

Instead though, the newly-seasoned champ took a breath, took her time, and kept her powder dry for this Sunday.

In a little teaser for the stacked Historic Battle Royal, Ember Moon beat Dana Brooke as well as future feuders Nia Jax and Tamina to show her credentials.

It’s not certain that the winner of the #1 Contender melee will even be from the Raw roster, with women from SmackDown Live and a clutch of returning free agents are also in the mix.

But if it is someone from the red brand, it feels hard to look past Ember, who has flattered to deceive since her promotion to the main roster but is now building up a head of serious steam.

What did you think of Monday Night Raw? Let us know at @digitalspywwe.