Breaking News
What's Hamilton about on Disney+, who's in the cast and how long is it?
DMA's can’t wait to get back on the road with The Glow to give fans escape from reality
‘Katy Keene’ Canceled By The CW After One Season; ‘Riverdale’ Spinoff Series To Look For New Home
15 Times 'The Simpsons' Predicted the Future (Photos)
Skip to content

So will their baby dream come true? And what happened to Robert’s baby Seb? Let’s find out… 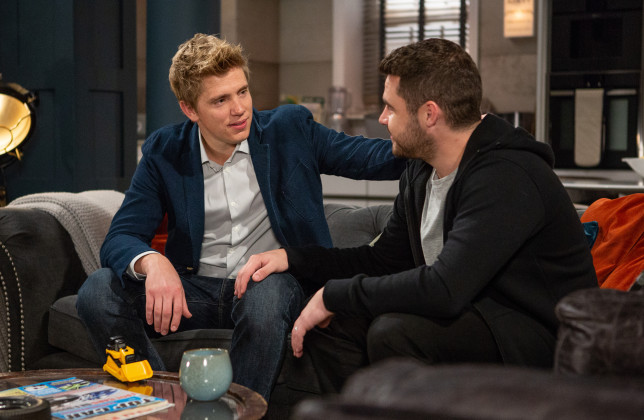 Will Aaron Dingle and Robert Sugden have a baby in Emmerdale?

If Aaron gets his way then they will definitely be having a baby in the not-too-distant future.

The couple planned to use a surrogate to have a baby, but when Robert’s plot to scam money from Graham Foster and Kim Tate was uncovered, he was left virtually penniless and the baby plans had to go on the back burner.

But Aaron won’t let that stop him and spoilers have revealed that he’ll go full steam ahead when he meets a potential surrogate called Lucie in upcoming episodes.

He’ll want to secure her as their surrogate – and when Robert reveals he’s been handed a cash deposit for a new contract – Aaron eyes it thoughtfully. What happened to Seb in Emmerdale?

Seb is Robert’s son with his ex-girlfriend Rebecca White. The tot was conceived when Robert had a one-night-stand with Rebecca while Aaron was in prison.

At first Aaron was so heartbroken and saw the baby as a constant reminder of Rober’s betrayal. The couple ended up splitting up over it.

When Seb was only a few months old, Rebecca was involved in a lethal car crash caused by her nephew Lachlan White. It killed her sister and dad – Chrissie and Lawrence – and left her in a coma.

When she came round it was clear she’d suffered some brain damage in the accident and wasn’t able to care for the baby alone.

The couple reunited and Seb spent most of his time with them.

When Rebecca decided to move to Liverpool with her boyfriend Ross Barton, they took Seb with them.

Robert and Aaron were heartbroken at first, but realised they would still see him lots.