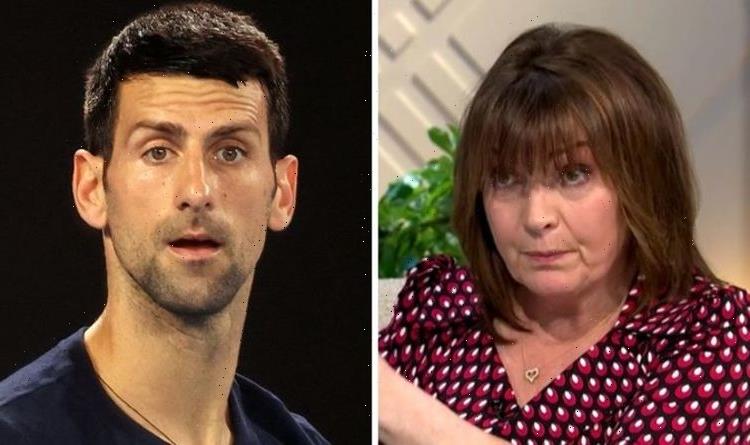 Lorraine Kelly, 62, has voiced her opinion on tennis star Novak Djokovic’s deportation which has prevented him from defending his Australian Open title. The world number one tennis player was bidding to have the chance to win a record 21st men’s Grand Slam title. In an interview with Andy Murray’s mother Judy, during Monday’s instalment of her self-titled chat show, Lorraine hit out at Djokovic for getting himself in “a right old mess”.

Djokovic landed back in Serbia earlier today after being deported from Melbourne ahead of the Australian Grand Slam.

The 34-year-old tennis player, who is unvaccinated against coronavirus, failed to overturn a decision from the Australian government to cancel his visa on public health grounds.

He now faces missing out on the French Open after politicians voted in a law banning all unvaccinated people from entering sports areas.

Lorraine, who was joined by Judy via a live video link, discussed her five times Aussie Open runner-up son Andy Murray’s training for the tournament which starts today.

However, Lorraine couldn’t resist asking Judy about her views on Djokovic’s deportation.

The broadcaster said: “You were saying it’s your favourite tournament, I am wondering though, do you think the whole Djokovic debacle is going to affect the tournament at all?

“Do you think that will cast a shadow over it, or do you think as things get up and running today and tomorrow we will forget about that and concentrate on the tennis?”

Judy, also 62, replied: “Yes I think it went on for about 11 days before he was deported and I think it overshadowed everything else which was going on in the tennis world.

“But no the tournament has kicked off without him I think everybody will focus on the tennis now.”

She added: “Global travel is nearly impossible now unless you’re vaccinated so it’s going to be tough for him to compete on the circuit now.

Lorraine added: “I agree with you, I just don’t understand why he doesn’t get vaccinated and then that’s that and then he can play sport without any of this hoopla.”

“It’s been a right old mess,” the Scottish presenter added.

Lorraine managed to turn the conversation back to Judy’s other son Jamie who is also playing in the Australian Open this year.

Judy explained: “He’s in good shape. He played in Sydney last week and he posted some pictures of himself on Instagram doing some things which made me think, ‘Oh my word, what an earth?’

“He’s in a good place ready to go and he loves the Australian Open as I think it’s known as the happy slam and is the most relaxing one for the players and fingers crossed.”

However, the supportive mother is unable to watch either of her sons compete in Australia this year.

She’s currently based in Perthshire, Scotland, so will have to communicate with her boys over the phone while they battle it out Down Under.

Jamie has also aired his opinions on Djokovic, and recently said after competing for Great Britain at the ATP Cup: “I think if it was me that wasn’t vaccinated I wouldn’t be getting an exemption.”

Lorraine continues weekdays on ITV at 9am.