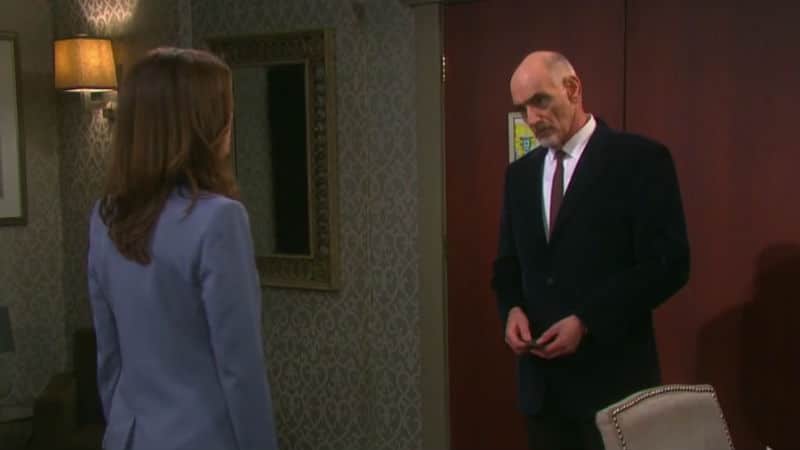 On Days of our Lives, speculation is rampant that more back from the dead characters are about to pop up in Salem after we’ve seen several mystery initials on the doors of Kristen’s (Stacy Haiduk) funhouse. I mean, warehouse!

Who exactly are we talking about? The initials that kicked off everyone’s rumor-mongering were E.D. for presumably E. J. DiMera. But wait, there’s more!

W.R. on Days of our Lives stands for who exactly? Could it be that malevolent evil doer, Wilhelm Rolf (William Utay), the dirty doctor who has had a hand in everyone’s death, rebirth, and just about any other-worldly event in Salem? Maybe, yes?!

Dr. Rolf did the DiMera’s evil bidding for decades before he himself succumbed to Father Time. Even his own serums and potions couldn’t thwart the Grim Reaper.

So, his return would be sweet revenge in a weird sort of way. And guess what? The apparent truth is stranger than fiction because Dr. Rolf is expected to make an appearance this week, tormenting his victims no doubt!

Kristen’s warehouse has been the scene of mayhem as Eric (Greg Vaughan), Brady (Eric Martsolf), Nicole (Arianne Zucker), Sami (Alison Sweeney), and Xander (Paul Telfer) have all haunted its halls, with varying degrees of success; not everyone lives to tell the tale!

A night to remember! ?: @thaaopenghlis

Also piquing fans’ curiosity is the initials A.D. Maybe Andre DiMera? Why not?!

Thaao Penghlis has not been seen in a while, but could he be about to return to the bosom of his family? Apparently so! Andre is rumored to also be back this week but as a sort of spooky apparition. Halloween is just around the corner, right, and what would Salem be without a little haunting? Boo!

Days of our Lives airs weekdays on NBC.