Tonight is the night many soap fans have waited almost 20 years to see – the return of Emmerdale‘s superbitch Kim Tate. The iconic villainess is fresh out of prison, and returning to her former home as she makes her grand entrance at Joe Tate’s masquerade ball.

Kim’s only back for a week, so we’re going to have to make the most of her while we can, but she’s set to make herself new enemies within minutes. One even goes as far as pushing the former lady of the manor down the stairs into a champagne fountain.

With so much drama in store, we thought it was a good opportunity to give you a refresher in all things KT. This evil minx has spent her life being bad, so let’s refresh your memory…

1. Her previous reign at Home Farm 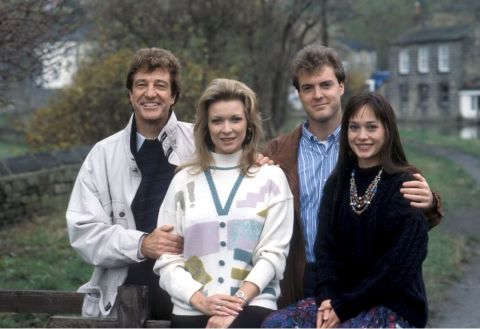 Kim came to the throne as queen of Home Farm back in 1989, when her first husband Frank purchased the country pile. The wealthy Tates weren’t an instant hit with the villagers, and from the word go Kim knew how to rub people up the wrong way.

Lady Muck resided in the big house with Frank and his grown up kids, Chris and Zoe (both of who ended up becoming Kim’s bitter enemies), until she was slung out on Christmas 1992 for sleeping with toffy family friend The Rt Hon Neil Kincaid.

Kim was let in from the cold a couple of years later when she and Frank remarried, but her time at the top came to end in 1997. 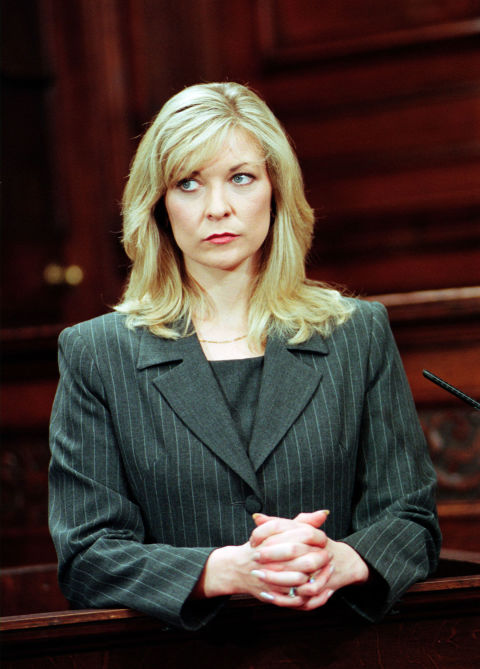 Kim probably came out of the womb with pound signs flashing in her eyes. Her relationship with Frank started out as an affair when his wife Jean was dying from cancer, and she made damn sure she made her way into the marriage bed. There ain’t no fool like an old fool, and Frank seemed oblivious to the fact that Kim, who was 20 years his junior, had got hitched to him for anything more than his considerable fortune.

Even after their union crumbled, Kim’s key focus was to get her cut of his cash. The gold digger went as far as accepting a million quid from Frank so that she would say he was the father of her son, James, not her lover Dave Glover. FYI, there’s still a question mark over James’s true paternity.

3. Her fierce rivalry with stepson Chris 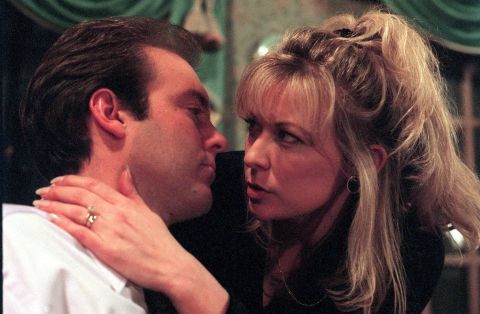 Cold-hearted Chris didn’t always hate his wicked stepmum. In fact, back in the day he had a huge crush on Kim, so was undoubtedly miffed when she chose to marry his old man instead. His initial lust turned into deep loathing, and Chris could never hide his objection towards the woman he believed was taking Frank for a ride.

But just as Chris couldn’t stand Kim, the feeling was entirely mutual. What made the pair’s on-screen rivalry so intriguing was that at the time actors Claire King and Peter Amory were married in real life.

Kim had a healthy appetite for handsome men who weren’t her own. Bored of her tedious marriage to Frank, she first strayed with The Rt Hon Neil Kincaid (try saying that after a skinful), after they bonded over their shared love of all things equine.

Her next lover Dave Glover didn’t come with a grand title, but he was just the bit of rough Kim had been craving. The pair romped their way through every stable in the village, and Kim went to great lengths to keep the fling under wraps – even trampling Nick Bates (the brother of Kathy, who was Dave’s girlfriend) under her horse.

Dave might have been Kim’s soulmate, but it all ended in tragedy when he was killed in a fire at Home Farm on Boxing Day 1996.

5. Her rarely seen softer side

Hard as it might be to believe, Kim’s heart wasn’t made entirely from cold, hard stone. There were moments viewers got to witness her caring nature, even though they were few and far between. Kim’s biggest passion in life were her prized horses, which she found far more appealing than humans. She also struck up a firm but unlikely friendship with retired gamekeeper Seth Armstrong, who was one of the only people in the village who ever got to see Kim’s vulnerable side.

The old codger, who became like a father figure to Kim, even gave her away at her wedding to Steve Marchant in 1998. And of course, let’s not forget Kim was also a mummy, albeit an unconventional one. But there’s no doubting how much she loved her little James, even if she did continually use him as a pawn in her wicked games.

6. She faked her own death 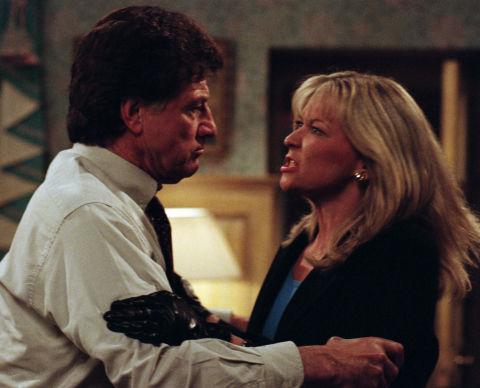 Kim was written out of the show in February 1997, when she suddenly disappeared on screen. Weeks later, her car was pulled from a quarry and Frank went to the morgue to identity his wife’s heavily decomposed corpse. But just we were all mourning the loss of Kim, those clever Emmerdale writers decided it was time to resurrect her.

Frank, who had been the prime suspect for Kim’s death, was stunned when his estranged wife reappeared, revealing she’d paid a lookalike prostitute to pose as her, while she’d jetted off to the Caribbean. As it turned out, it was the same unfortunate blonde who had met her maker in the quarry.

The shock of seeing Kim rise from the ashes ended up putting poor old Frank into the grave as he suffered a fatal heart attack. In her most deliciously evil act ever, Kim gave us her finest Lady Macbeth impersonation as she stood back and watched her spouse lying dying on the carpet, uttering the iconic line: “You’re a dinosaur, Frank, and you know what happened to them.” Savage!

To ensure Frank was a goner, Kim held her compact mirror over his mouth, then proceeded to coolly reapply her powder, before making her departure. It was all so gloriously camp, and Kim all over!

Just so no-one feels sorry for Frank here, Kim treated her second hubby Steve equally appallingly. After the couple fell on hard times, they decided to steal a horse. The plan nearly worked, except for the fact that Steve mowed over Kathy in his car while making a getaway from the robbery.

Not prepared to spend her future behind bars, Kim stitched Steve up to make him look the sole guilty party, even though she’d helped orchestrate the crime. Steve was given a 12 year prison sentence for robbery and hit and run, while Kim made plans for her great escape.

When Kim left Emmerdale for real in 1999, there was no way she was going to go quietly in a black taxi. Oh no. Her final episode saw her confront Chris in the living room at Home Farm, where knocked him out with a paperweight, and proceeded to tell him how she’d stood back and watched his dad die in the same position.

To add insult to injury, Kim poured a bottle of whisky over Chris’s head (“This one’s on me”!), before her and James jumped into a helicopter on Home Farm’s lawn. And there she went, soaring into the sky, leaving Chris crawling on the driveway, while Kim flew over the sky, looking down on the commoners as she went!

Emmerdale airs weeknights at 7pm on ITV, with an extra episode at 8pm on Thursdays.