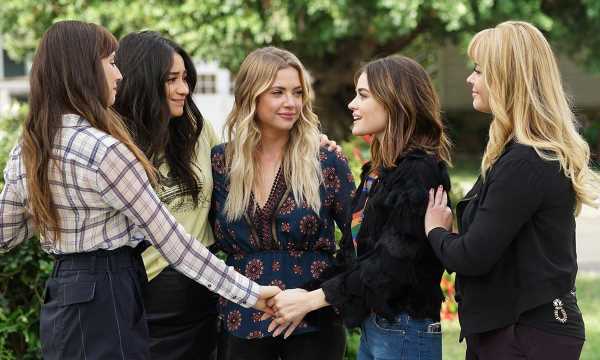 All seven seasons of teen drama Pretty Little Liars have landed on Netflix, and we can’t think of a better way to spend our evenings now the nights are drawing in than in front of the sofa rewatching it!

The series originally ran from 2010 to 2017 and followed a group of teenage girls whose lives become dominated by the mysterious ‘A’ following the disappearance of their queen bee Alison. But what have the cast been up to since saying goodbye to Rosewood? Find out here…

We all remember Lucy Hale as the ever-so-stylish and cool Aaria Montgomery, but in recent years actress Lucy Hale has made quite a name for herself in the horror genre. The 32-year-old actress has starred in the likes of Truth or Dare, Scream 4 and Fantasy Island. She has also continued to take on TV roles and led the series Life Sentance and Katy Keene, the latter of which led to a guest role on Riverdale.

Troian Bellisario starred as the brains of the group, Spencer Hastings, who will do anything to please and impress her family and friends. Since the show wrapped, the actress has starred in the likes of Where’d You Go Bernadette, Sister Cities and Clara. She has explored life behind the camera and in 2017, wrote, produced and starred in social media drama Feed alongside Harry Potter star Tom Felton.

Earlier this year, she welcomed her second child with Suits star Patrick J Adams. The couple, who wed in 2016, have two daughters, Aurora Avery, born in 2018, and Elliot Rowena, born in May of this year.

Ashley Benson played Hanna Marin in the series, who takes Alison’s place as Rosewood High’s new queen bee following her disappearance. Following the show’s end in 2017, she landed roles in the movies Her Smell, The Birthday Cake and 18 & Over. She also came out as bisexual, dating model and actress Cara Delevigne between 2018 and 2020. More recently, she has been in an on-again, off-again relationship with rapper G-Eazy.

Shay Mitchell rounded off the main group of friends on the show as Emily Fields. Nowadays, the actress is better known for appearing as Peach Salinger in the Netflix thriller You and Stella Cole in the comedy series Dollface. The actress has been in a relationship with Matte Babel since 2017, and the couple welcomed their first daughter named Atlas in October 2019.

Can you believe that Sasha Pieterse was just 13 years old when she took on the role of Alison DiLaurentis in the series? Now 25, Sasha has an impressive career under her belt that includes a stint on Dancing With the Stars. She also reprised her role of Alison for the spinoff series Pretty Little Liars: The Perfectionists. In 2020, she welcomed her first child with her husband of three years, Hudson Sheaffer.

Ian Harding played Rosewood High teacher Ezra Fitz in the series. Since the show finished, Ian has appeared in Chicago Med and he even had a supporting role in the movie Ford v Ferrari.

Janel Parrish played Hanna Marin’s frenemy, Mona Vanderwaal, throughout all seven seasons of the show. In the years since the show finished, Janel has continued to act; she appeared as Margot Covey in all three To All the Boys I’ve Loved Before films and was another original Pretty Little Liars cast member who appeared in the sequel series, The Perfectionists.

Keegan Allen played Toby Cavanaugh, the love interest of Spencer Hastings. After the series ended, Keegan landed himself supporting roles on CSI, Major Crimes and What/If. He can be found nowadays on the CW starring opposite Jared Padalecki in Walker.