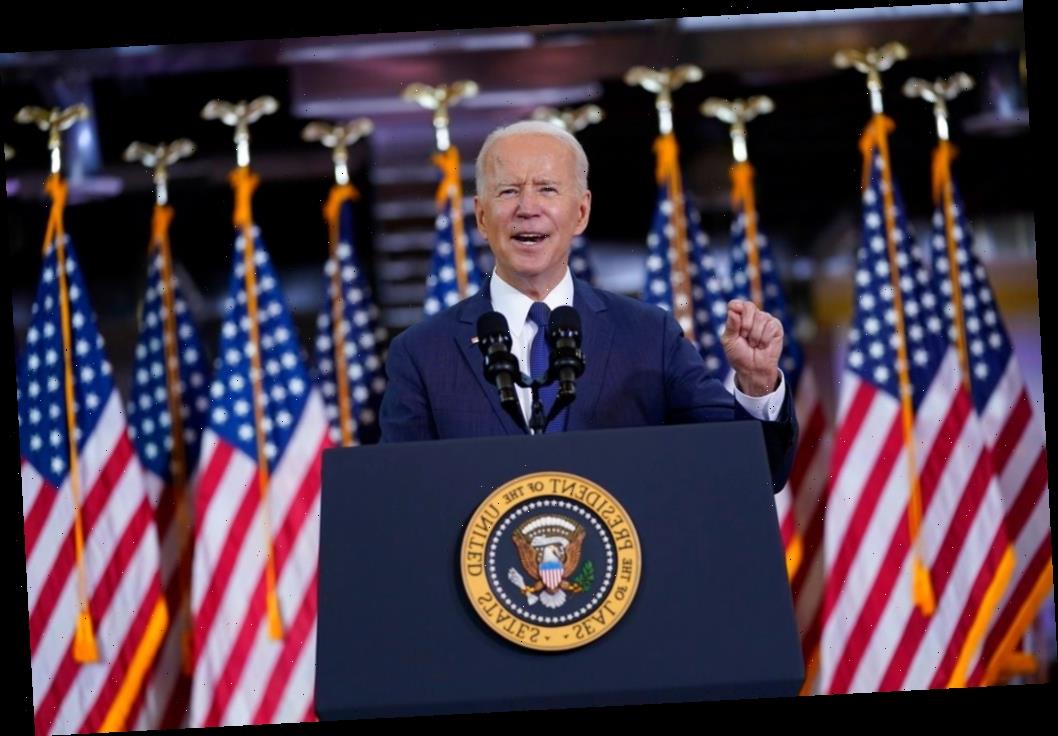 Joe Biden unveiled a $2 trillion infrastructure plan on Wednesday that includes a call for “broadband for all,” comparing the need for affordable, high speed internet service to the New Deal era electrification of much of the country in the 1930s.

But it also includes a significant boost in corporate tax rates to 28%, less than four years after the business lobby, including major studios and media companies, fought to lower it, ultimately, to 21%.

As he did during the presidential campaign, Biden also signaled that higher income earners also could see higher taxes, as he set the benchmark for those will not see an increase.

“No one making under $400,000 will see their taxes go up, period,” Biden said. “This is not about penalizing anyone. I have noting against millionaires and billionaires. I believe in American capitalism. I want everyone to do well.”

Joe Biden Warns Of Rising Covid Cases, Says 90% Of U.S. Adults Will Be Eligible To Get Vaccine Within Three Weeks

But he said that “right now, a middle class couple, a firefighter and a teacher with two kids make a combined salary of $110, $120,000 a year pays 22 cents for each additional dollar they earn in federal income tax. But a multinational corporation that builds a factory abroad…they pay nothing at all.”

Biden singled out Amazon as one of the companies identified in a study that showed they used loopholes and paid “not a single solitary penny in federal income tax. … I am going to put an end to that.”

“No one should be able to complain about that. It is still lower than what it was between World War II and 2017. Just doing that one thing will generate $1 trillion in additional revenue in 15 years.”

Media, entertainment and telecom companies have not yet commented on the Biden proposal to raise the corporate rate. But the U.S. Chamber of Commerce called the proposed tax increase “dangerously misguided” and warned that it would “slow the economic recovery and make the U.S. less competitive globally.”

Biden’s American Jobs Plan plan includes traditional outlays for roads, highways and bridges, as well as upgrade the electrical grid. It also would try to address what is known as the “digital divide,” with some 30 million in areas that has no high speed service, as well as a disparity in internet home connectivity between white families and Black and Latino.

The plan includes $100 billion to build out high-speed Internet infrastructure to try to close the digital divide, while also putting a priority on support of networks owned by local governments, non-profits, and co-operatives. It also calls for reducing the cost of internet service, albeit the plan was not specific in exactly how that would be achieved.

The plan calls into question existing government efforts to subsidize internet service for low income households, but says that Biden believes that “is not the right long-term solution for consumers or taxpayers.”

That has raised concerns among internet providers of potential price regulation.

In a statement, Michael Powell, the president and CEO of NCTA — The Internet & Television Association, took issue with that aspect of the infrastructure plan as well as the adoption of government-run networks.

“Government does have a critical role to play in getting networks to areas that lack service and helping low-income families afford it,” he said. “However, those targeted, shared goals are not served by suggesting wrongly that the entire network is ailing and that the solution is either to prioritize government-owned networks or micromanage private networks, including the unfounded assertion that the government should be managing prices.”

Jonathan Spalter, the president and CEO of USTelecom, praised Biden for proposing a plan to close the digital divide, but was more measured in framing the dynamics of the next few months, as lawmakers on Capitol Hill take up the plan.

“Congress now should prioritize affordability and accessibility solutions that are fast and smart and incentivize continued private investment to get the job done, he said. “We shouldn’t lose this fundamental context as we drive toward our collective connectivity goals.”