In Digital Spy‘s exclusive video, Aisleyne is seen on a date, and is recognised by waiter Sam Conrad – but he can’t place her.

In the video, Sam says: “There’s a recognisable face here, I think.”

He then asks Aisleyne’s (presumably civilian) date: “Who is she?”

After her date explains she’s from Big Brother, Sam cottons on. “Now I don’t have to say nothing,” Aisleyne jokes.

Telling them to carry on flirting, Sam leaves the pair to exclaim things like, “we’re not flirting”, and “jog on”, and “drop me out”. They seem pretty well suited.

“#FirstDates is back next Monday with more love, laughter and lots of jokes at 10pm on @Channel4,” the tweet read.

“If I wasn’t with an alpha male,” Aisleyne says in the video. “I’d probably walk all over him.”

In last week’s episode, viewers were introduced to Fred Sirieix’s dad, who was just as charming as his son, if not more so. He couldn’t speak English, but according to Fred, he could speak to anyone. 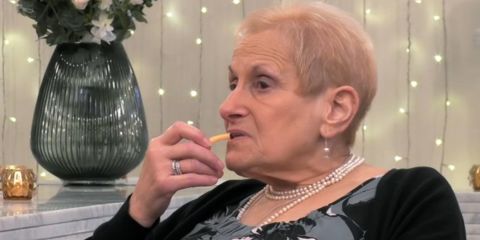 Continuing the family theme, fans also saw a pair of twins on a double date.