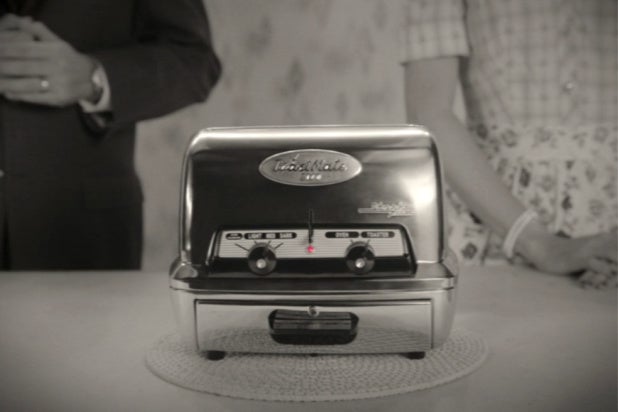 One of the big topics of conversation that we’re inevitably going to focus on when we’re talking about “WandaVision” over the next couple months will be those fake TV commercials. There was one in each of the first two episodes that are on Disney+ now, and there’s little doubt we’ll see more of them as the series goes on.

One of these commercials is for a fancy toaster, and the other is for a fancy watch. While these asides might seem like just fun gags, they’re definitely more than just that. In fact, they’re actually important to the plot somehow.

“If this is the very first Marvel MCU thing you’re watching, it’s just a strange version of a 50s commercial or 60s commercial that that you’ll have to keep watching series to understand,” Marvel Studios boss Kevin Feige said at a press event. “If you have been watching all the movies, you might be able to start connecting what those things mean to the to the past.”

So they’re important. And if you’re a fan of the Marvel Cinematic Universe, you probably noticed that they also are references to other MCU characters.

The toaster, from Stark Industries, is super obvious, you know, with Tony Stark being Iron Man and his father Howard also being a key figure in the MCU. But also you should recall that the Maximoff twins entered the MCU seeking revenge against Tony Stark because it was a Stark Industries bomb that killed their parents when they were kids.

The Strucker watch ad is a bit more obscure, but crucial to Wanda’s personal history: Baron Wolfgang von Strucker is the Hydra guy who used the Mind Stone to give Wanda and her brother their superpowers before “Avengers: Age of Ultron.”

“Is your husband tired of you burning his toast? Try our new and improved Toast Mate 2000. It’s the go-to for clever housewives,” the man in the Stark ad says.

“Set the dial and get the taste back into your toast. Top and bottom heating elements can handle anything, from meat loaf to cherry pie to open-faced cheese sandwiches. The all-new Toast Mate 2000, by Stark Industries. Forget the past, this is your future!”

The Strucker ad is a bit more succinct.

“They say a man is never fully dressed without two important accessories: his special lady, and his Strucker. Strucker: he’ll make time for you,” the narrator says.

Conspicuously, the same man and woman feature in both ads — they’re played by Victoria Blade and Ithamar Enriquez. There’s not enough to go on here, as far as we can tell, to make real guesses about who those people are, unfortunately, though that hasn’t stopped people from doing so anyway. One particular theory that caught our eye was that they’re Wanda’s parents, but there’s really nothing tangible that actually points to that.

Also, Wanda’s dad in the comics is the mutant Magneto — a reality that is now on the table for the MCU now that Disney has acquired Fox — and it seems like a stretch that Marvel would cast a relative unknown actor like Enriquez in a role like that. No disrespect for Enriquez intended, of course — it would be pretty sick to have a Latino Magneto — it just would be an extremely surprising revelation.

So all we really know is that these fake commercials hold some major relevance to the overall plot of “WandaVision.” We suspect that this whole thing is some kind of simulation keyed to Wanda’s mind — not sure there’s anything else we can assume at this point — then we can guess that these things are surfacing because of Wanda’s trauma. But we’ll need to see more of these to connect the dots any further.