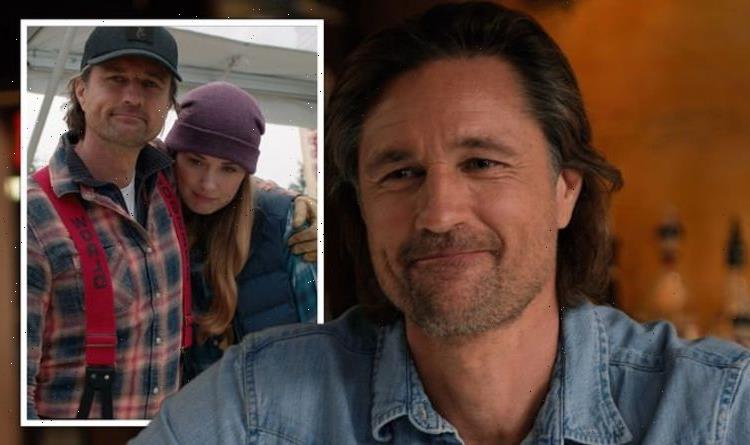 In the third run of Virgin River, Mel (played by Alexandra Breckenridge) announced she was pregnant. Jack was thrilled with the news but in a surprise turn of events, Mel admitted the baby may not be is. She explained she could be pregnant with her late husband Mark’s (Daniel Gillies) child as they had an extra embryo saved. Fans of the Netflix series are hoping the baby is Jack’s despite the fact the bar owner is expecting twins with his ex Charmaine Roberts (Lauren Hammersley).

As fans wait to see if Charmaine’s twins father is Jack and if Mel is expecting her partner’s baby too, they are desperate for news on the fourth season.

Taking to Instagram, actor Martin posted a snap of himself recording a voice over with a screen showing Mel in the background.

He captioned the shot: “Back at work…getting season 4 good and ready for consumption.”

The update suggests the final touches to the new episodes are underway with a release date coming soon.

One shared: “All your hard work and we devour it in a few hours,” alongside a crying with laughter emoji.

Another commented: “Aww! Hey you! have a good work @martinhendersonofficial we are looking forward to season 4.”

A third posted: “So good to see you @martinhendersonofficial we’ve missed you! Hope you had been enjoying your break.”

Martin’s latest post comes almost two months since he shared an update from the set of the series.

The actor could last be seen in a snap with his co-star Alexandra as they filmed over Thanksgiving.

The pair were pictured smiling at the camera while standing by a heater to stay warm.

He captioned the shot: “Happy Thanksgiving everyone!!Pretending it’s always warm in Virgin River. 1 week of shooting season 4 left…hope you all enjoy it when it drops. #setlife.”

Meanwhile, as the finishing touches are made to season four of Virgin River, the fifth series has been hit with delays.

Posting on her Instagram story, Alexandra told fans: “We were supposed to start [filming] in March, but it was pushed so… I don’t know. I don’t know man.

“I’m hoping that maybe we’ll start in the summer. It would be nice to film in Vancouver in the summer rather than the winter.”

Explaining the delay, she added: “To be quite frank with you guys, I’m pretty done filming in Vancouver in the winter.

“Not really interested in doing that ever again, actually.

“It’s really cold. And when you’re standing outside in sandals, and little outfits because it’s supposed to be the middle of summer… not awesome!”

Hopefully it won’t be much longer before the series hits television screens and fans can be transported back to Virgin River.

Virgin River seasons 1-3 are available to stream on Netflix now.