This Morning presenters Ruth Langsford and Eamonn Holmes were joined by two D-Day veterans to open the final show of the week. It comes as this weekend, many people will be taking a moment to remember those who have died to protect the country as Remembrance Day is commemorated. Jeffrey Haward and Marie Scott shared their incredible stories and explained why it was important to remember and continue to raise money for fallen comrades and those who have served our country.

Marie was a radio operator during the Second World War and she was just 17 on D-Day.

Her job involved passing on coded messages to troops landing on the beaches and reflecting on her time in the war, she referenced how Brexit has exposed divisions and MPs are not respecting the democratic will of the people.

“Marie, let’s come to you first,” Ruth said. “Why is it so important to continue to wear the poppy and continue to talk about the people we lost?”

“Because, particularly today, democracy seems a rather fragile right,” she explained. 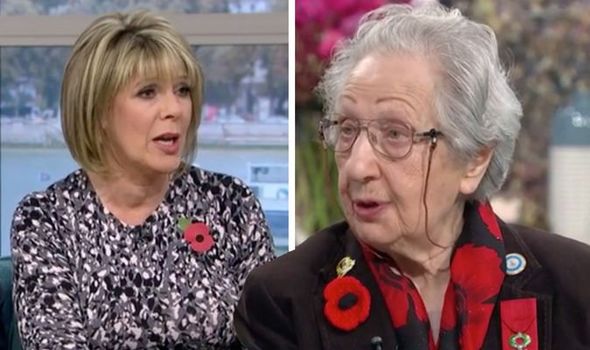 “When you think of the men who died to protect democracy 75 years ago, I think they would be horrified if they thought their sacrifice was in vain.”

Taking about the work she did as a young woman, Marie said: “I grew up on D-Day when I was manning the VHF radio and it was a one way system, and when I finished relaying what I had to they lifted the receiver, they were on the beaches of Normandy.

“I could hear the sounds of war,” she harrowingly revealed.

“It wasn’t just war it was loud gunfire, people shouting, the turmoil of war.” 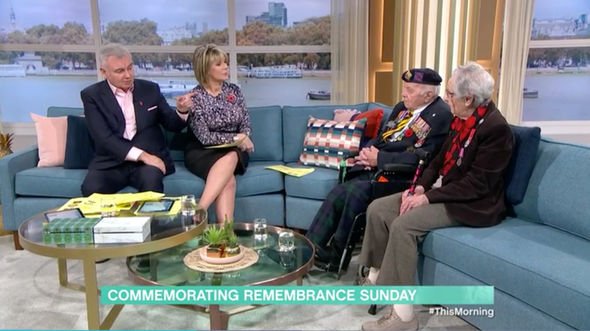 While Marie was based in the UK, Jeffrey, who served as one of the 558,000 Allied soldiers was evacuated from Dunkirk.

“Jeffrey, you were there, you had to make your way for the evacuation at Dunkirk. You are 100-years-of-age my friend, and we salute you for all you have gone through, because you are living history aren’t you?” Eamonn said.

Jeffrey then told the viewers how he returned to Folkstone. 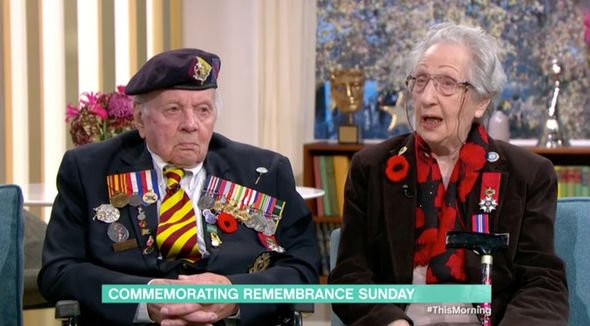 “I saw this boat, on it’s side – beached. People were getting on it and the crew had got a big oil drum and they were burning oily rags to make out it was on fire so the Luftwaffe would leave us alone,” he said.

“I was so tired, I fell asleep and I remember waking up and feeling the motion of the boat and the next thing I remember is someone shaking me up, saying ‘wake up, we’re coming into Folkestone,’” He added.

“So I don’t know what happened.”

Those watching the emotional interview at home took to Twitter to express their gratitude.

“Great to see world war veterans on the couch, thank you for everything you done for us during the wars, proud of you all x #ThisMorning,” one said.

Another added: “#ThisMorning Total Respect for those fallen and for those still fighting.”

“Thank you for your service to our country too you both! #ThisMorning,” a third wrote.

This Morning airs weekday mornings at 10.30am on ITV.