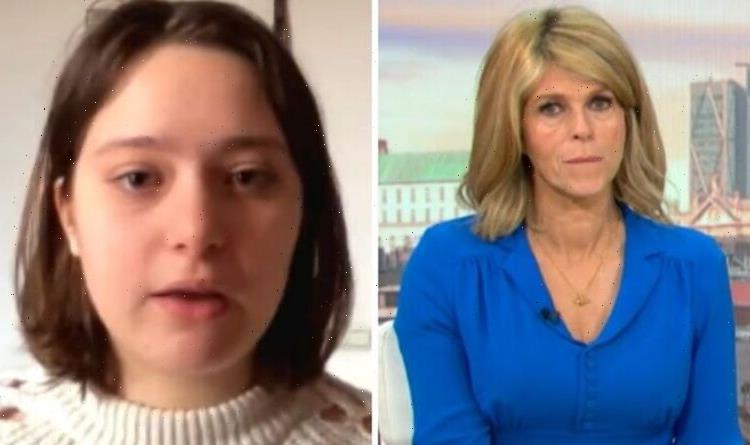 Ukrainian student says she's 'not scared' to defend her country

Good Morning Britain host Kate Garraway began the interview by pleading with Valentina to “run and hide” following Russia’s attack on Ukraine. Russian President Vladimir Putin declared an invasion of Ukraine on Thursday, with the explosions continuing overnight and into Friday morning.

It has since been reported by Ukrainian President Volodymyr Zelenskyy that 137 people have been killed, and 316 wounded so far.

However, Ukrainian student Valentina, who spoke via video link, told Ben and Kate that Putin doesn’t deserve her fear.

“What are you going to do?” Kate asked. “What is your plan?”

Valentina replied: “My plan remains as it is was and that is to stay in Kiev. It is to do what I can to defend.”

“The entirety of the Kiev population is very ready to do whatever it takes to defend our capital.

“Am I terrified? Of course, I am. I am not used to rockets flying over my head.”

“But to me, this is my life and this is my country’s entire future and identity.

“This isn’t some outside political conflict where there is some kind of cost-benefit, these are people’s lives.

“To the extent of staying here and looking after my country, I am not scared.

“I do not believe that Putin and his government deserve my fear or any Ukrainian fear. So I am not planning to run.”

Following the interview, emotional viewers took to social media to praise Valentina for being so brave.

Katie penned: “Wow what an amazing young woman. Sat in tears listening to her, feeling helpless for Ukrainian people & an overwhelming sense of awe at how brave she was.

“We are with you Valentina and #Ukraine The defence secretary on the other hand has me in tears with frustration!!” (sic)

Carly tweeted: “The young girl Valentina speaking on #GMB from Ukraine has just absolutely broke me. So brave when she must be absolutely terrified.”

While user Miss Arsenal added: “My heart goes out to Valentina, I can’t even start to imagine what she and her fellow Ukrainians are going through.”

Helsy went on to add: “Honestly I’m so upset by everything that’s happening in Ukraine.