Let’s get this out of the way: “True Detective” Season 3 is good. Whether or not you believe the first season to be an untouchable classic or an overrated but well-acted cop show, Nic Pizzolatto’s new episodes are a big step up from a second season as muddled and meaningless as that water stain above Vince Vaughn’s bed. With strong performances all-around — and a flat-out remarkable turn from Mahershala Ali — HBO’s third season benefits from reliable genre elements, a compelling central story, and aesthetics as lush as they are eerie.

Taking place over three time periods, Season 3 focuses on Wayne Hays (Ali), an Arkansas police detective and Vietnam veteran who takes on the case of a missing brother and sister in 1980. He and his partner, Roland West (Stephen Dorff), aren’t exactly exemplary officers — they spend their shifts shooting at rats and sipping Miller High Life — but they’re rattled by the parents’ disheveled demeanor (played by Scoot McNairy and Mamie Gummer) as well as the peculiar developments of the investigation.

Those developments continue into 1990, when Wayne’s career has stalled until he’s brought in for questioning about the Purcell case. Then he’s stirred up yet again in 2015, as a grayed retiree facing down Alzheimer’s disease with the help of his grown son, Henry (Ray Fisher). It’s Wayne’s fracturing mind that sends the story bouncing through time, as the aging detective tries to solve a mystery that’s eluded him for more than 35 years.

Director Jeremy Saulnier creates a hypnotic, almost otherworldly atmosphere in his introductory episodes. The air carries the faintest bit of haze, growing thicker at night, and the actors are blocked with a bit of extra space between them. It knocks viewers just a smidgen off-kilter, but it also helps distinguish the ’80s storyline as Wayne’s memories instead of an absolute reality. Those who’ve seen Saulnier’s “Green Room” — but especially his latest feature film, “Hold the Dark” — should appreciate the development, while tried and true “Detective” fans will enjoy a style that both distinguishes the rural Arkansas setting and supports the lead character’s fractured mindset. 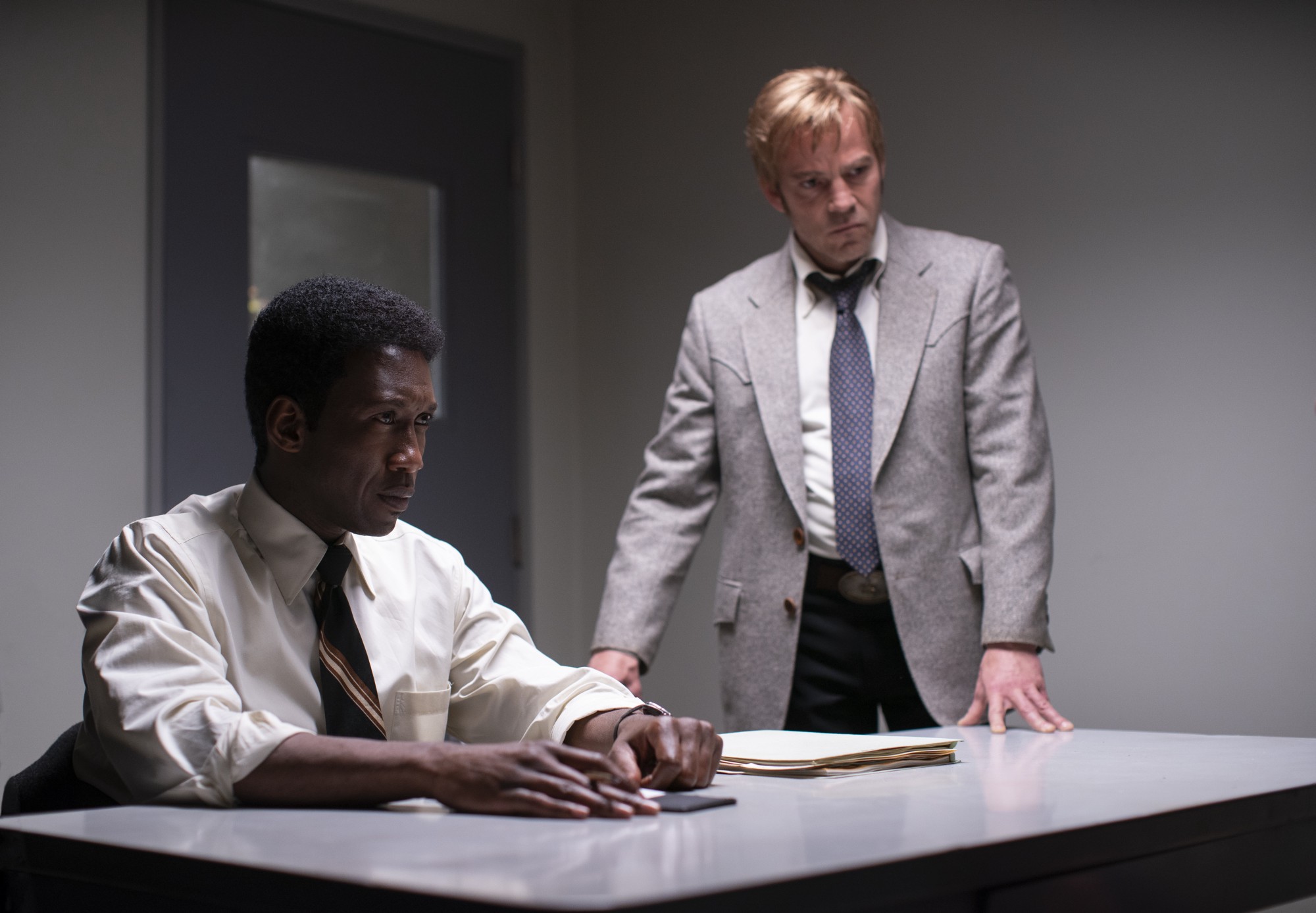 Wayne’s memory loss is the freshest and most enthralling aspect of Season 3. While plenty of other welcome additions harken back to Season 1 — a largely ignored rustic location, focused storytelling on three primary characters, one central mystery to untangle, etc. — his undiagnosed Alzheimer’s marks him as an empathetic, tragic figure and provides reason for telling his journey in three timelines instead of two. Even with a few showy wigs, the makeup, hair, and costume departments are working at the top of their games to help the audience quickly and easily differentiate between timelines, sans the obvious and obtrusive onscreen text.

But Mahershala Ali could’ve done it all on his own. The Academy Award-winning actor has yet to be challenged as thoroughly as he is here, tasked with not only carrying a distinguished TV series but building three connected characters who may or may not remember certain facets of themselves. Ali provides varying gaits, glances, and even vocal patterns for each version of Wayne. One fuels the other, in sequence, but they never betray insight they shouldn’t have or resurrect retired movements. His construction of Wayne is as detailed as the bibles written for entire shows, and the humanity he instills in his quest — both his charms and his sins — make Wayne the first worthy successor to Matthew McConaughey and Woody Harrelson’s Season 1 characters.

The rest of the cast is also very good, even if their characters betray the season’s flaws more than Wayne ever does. There’s a strong partner dynamic between the two central detectives, and Dorff sneaks in critical bits of humor and adds an edgy darkness to an emotionally closed off copper not that different than Harrelson’s Marty Hart. When he utters odd, forced lines about being a feminist, things get a little weird, but he still makes more sense than Carmen Ejogo’s schoolteacher and author, Amelia Reardon.

The actress does an excellent job building chemistry with Ali, and Amelia stands on her own enough to keep her from being subservient to the men’s narratives, but her motivations can be needlessly provocative or simplistic. Still, through no fault of the actor, it’s Mamie Gummer’s grieving Lucy who falls into the “True Detective” lady trap — the grieving mother is built only from contemptible characteristics, illustrated by her painful line, “I’ve got the soul of a whore.”

It’s grating errors like this that make you wonder what “True Detective” would be like with more writers offering broader perspectives. Pizzolatto has the cops’ and criminals’ stories down pat, but there’s a bit too much air in the balloon — racial plotlines don’t feel as rich as they could be, given the conservative time period and Southern setting, while episodes overall may test viewers’ patience from time to time. Still, the first five episodes are stirring entertainment, steadying a very rocky boat and teasing an end that feels far more likely to exceed expectations than spoil a strong setup.

“True Detective” is good again, and that alone is worth celebrating.