This Morning had viewers swooning today with the beautiful story of a soldier who rescued a dog from Syria.

But although the dog, Barrie, had plenty of attention, it was her owner Sean Laidlaw who really caught viewers’ eyes.

As he told hosts Eamonn Holmes and Ruth Langsford about his struggle to bring the pooch home, tweets admiring the bomb disposal expert flooded in.

But putting viewers’ thirst aside, Sean actually told a heart-wrenching story of how he rescued Barrie as a puppy from a bombed building.

She was the only puppy alive out of six, and spent months bonding with Sean and the other soldiers. Sean even made Barrie her own bulletproof vest, before he was told he wouldn’t be stationed in Syria anymore. 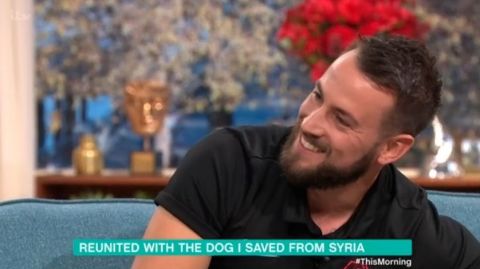 Sadly Sean couldn’t bring Barrie with him, so got in touch with charity War Paws so they could be reunited, raising over £4,500 to help bring her back.

War Paws brought Barrie to Iraq, where she was vaccinated before moving to Jordan where she was quarantined for three months. She was then taken to Paris, where Sean travelled to collect her.

The pair were apart for seven months before being reunited. “She came over and sniffed my knee and then she was straight on her back for a belly rub, that was the moment she knew, the tummy rub moment,” he said. 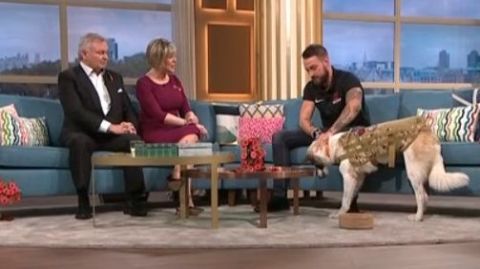 “She’s just a playful little thing. There’s something about her. Her little face in the rubble, we couldn’t leave her,” he said.

Speaking about how long it took Barrie to initially trust him, she said: “It took about four days, the last day was make or break. She’d either like us or not. She let us pick her up and that was it, we got her in the car.”

The pair now live together in Essex, where Sean owns a fitness company.

“It’s been hard,” he said discussing life outside the army. “After the forces, I didn’t think there was much to worry about. It was the slowly creeping up on you that happened.”

This Morning airs weekdays on ITV at 10.30am.