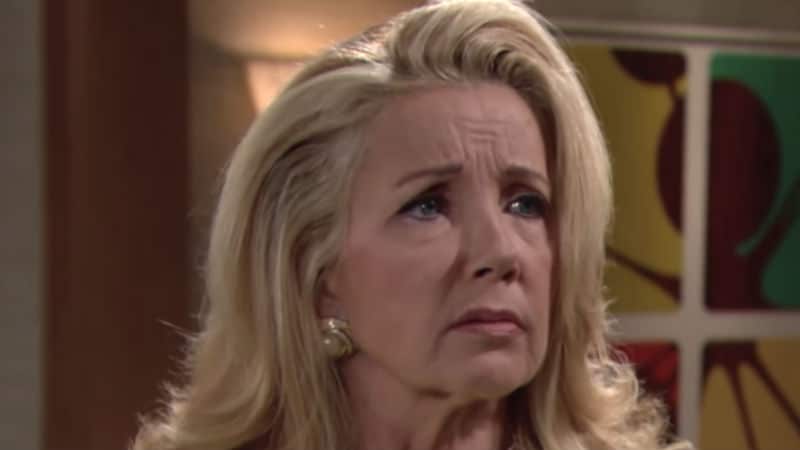 The Young and the Restless spoilers for next week’s episodes of the CBS soap reveal that the fallout from Ashley’s (Eileen Davidson) duplicity will rain down like hellfire over the entire Abbott clan.

But, that’s nothing compared to the unspeakable drama surrounding the Murder Posse as one member makes a bold move to end the blackmailing torment.

Well, Ashley Abbott proves that you can’t judge a book by its cover! In a shocking reversal of fortune, she lost everything while her brother Jack (Peter Bergman) gained it all back and then some.

Who would have thought that the blond beauty had it in her to stab Jack in the back, throw him under the bus, and snicker all at the same time? The multi-tasking babe finally fessed up to manipulating the man’s paternity test results, ending a long charade of pain for Jack. What now?

We know disgraced Ashley leaves town, but before she does, you do not want to miss the spanking she receives from Jack! It is epic!

Plus, Abby (Melissa Ordway) has a few choice words to spit at Ashley as well!

But, in an even more stunning reversal of fortune, what could cause Sharon (Sharon Case) to take Nick’s (Joshua Morrow) side? The humiliated wanna be bride stands by her man next week. Has she lost her mind?

Meanwhile, a hot love triangle heats up as Kyle (Michael Mealor) finds himself caught between the talons of both Summer (Hunter King) and Lola (Sasha Calle). Meow!

Summer is a nasty piece of work, belittling Lola’s food truck venture while she gets her money by blackmailing her own dad! Not to mention bedding her mom’s boyfriend. And yet, Kyle has a hard time keeping his mitts off her!

Speaking of Billy (Jason Thompson), where in the world is the gambling, unfaithful cad?

The Young and the Restless airs weekdays on CBS and in the evening on PopTV.

Next post Selena Gomez's Battle: She'll Face Depression and Anxiety for the 'Rest of Her Life' Says Source