For the first time in seven seasons, all four coaches had a shot at this one 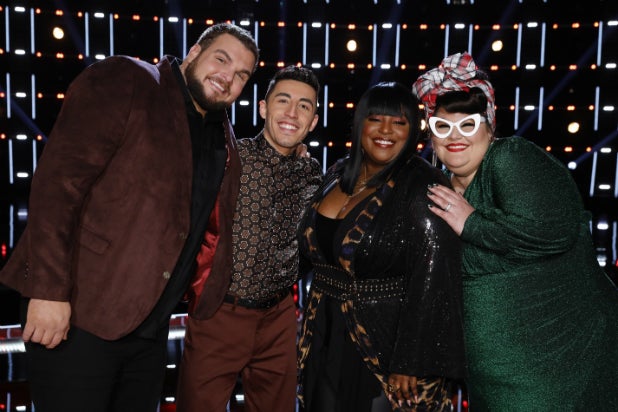 (Spoiler alert: Stop reading right now if you do not want to know who won Season 17 of “The Voice.” But also, why did you click on this story?)

NBC’s “The Voice” crowned a Season 17 winner on Tuesday — congrats to Jake Hoot of Team Kelly!

Ricky Duran was runner up. Katie Kaden finished in third, while Rose Short finished in fourth.

For the first time in seven seasons, all four coaches had a shot at this one.

Below are bios for each of the Final Four singers.

Jake was born in Texas, but his parents are missionaries and relocated the family to the Dominican Republic when he was 9. While living there he began singing and playing guitar while also becoming fluent in Spanish. At 20, he moved to Tennessee where he began gigging and attended Tennessee Tech University as a walk-on football player. Jake later got married and now has a 4-year-old daughter. After getting divorced, Jake is a newly single dad and hopes to start anew by making his daughter proud on “The Voice.”

Katie was surrounded by music from a young age and joined Chicago’s All God’s Children’s Choir when she was 10. She spent the next decade singing in church and choirs, but never had the confidence to perform on her own. Katie taught music on the side, but always felt something was missing. At 30, she did an open mic and was floored by the positive response, so she started booking gigs and slowly began to accept herself. For the past seven years, Katie has been more spirited than ever while singing professionally in Chicago’s blues community and hopes to spread her message of body positivity.

Rose started singing when she was 5 years old in Germany, where her father was stationed with the military. Growing up, she often performed at community events on the base. Her family eventually moved to Texas where she became involved in choir and theater. She always loved music, but after school she needed a job that paid the bills so she took a position at a male maximum-security prison. Rose worked as a corrections officer for eight years, but ultimately quit to focus on music again. Rose is currently a full-time musician, writing and performing her own music.

Ricky inherited his love of music from his father, who was a musician with another full-time job to support the family. At 6 years old, Ricky’s father taught him guitar and they played in a band together throughout Ricky’s high school years. Ricky went on to attend Berklee College of Music and form his own band while his father acted as their manager. Shortly after graduation, Ricky’s father tragically took his own life, but encouraged him to keep doing what he loved. Earlier this year, Ricky lost his mother to breast cancer. Ricky has dedicated his life to music to carry on his father’s legacy and comes to “The Voice” to make his parents proud.

From epic light shows to singing sensations, the NBC talent show has seen some stellar performances over the years