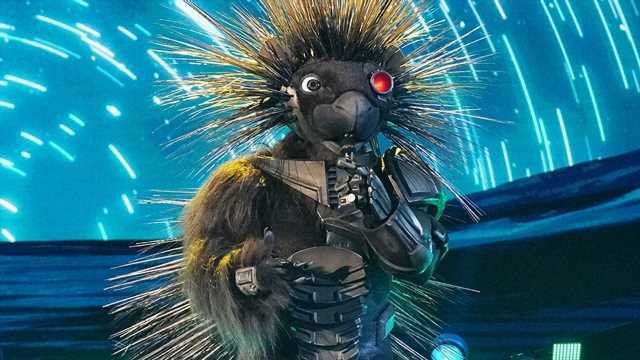 The Masked Singer returned for the “spicy six” showdown on Wednesday, and after some fun performances from the remaining contestants, fans had to bid farewell to Robopine!

During Wednesday’s show, fans got to see performances from all six of the costumed celebs still in the competition — Robopine, The Piglet, The Black Swan, The Russian Dolls, The Chameleon and The Yeti.

Despite a stirring cover of “Water Runs Dry” by Boyz II Men, which showed off his deep well of talent for R&B crooning, Robopine still came up short when it came to audience votes and was eliminated.

After the show’s panel of celebrity “detectives”  — Robin Thicke, Nicole Scherzinger, Ken Jeong, and Jenny McCarthy, as well as guest panelist Chrissy Metz — made their final guesses, it was time for Robobpine to unmask.

As it turns out, Scherzinger and Metz were right on the money when they guessed that Robopine was actually singer and movie star Tyrese Gibson!

Gibson spoke with ET’s Kevin Frazier on Wednesday, and reflected on how the coronavirus pandemic and his kids were both contributing factors in his participation on the show.

“We’re all stuck at home. Living in this bubble, trying to figure out what is this new world we live in,” he shared. “So what ended up happening for all of us who live on an airplane and are constantly moving and hustling, trying to keep everything afloat, we end up sitting on the couch and watching a whole lot of stuff that you never had time to watch.”

“So here I am at home and my daughter puts on Hulu and we’re watching all episodes of The Masked Singer, and she’s sitting there and we’re playing this guessing game of who’s who and what’s what and she said, ‘Daddy, you should do the show.’ And I said, ‘What?’ And she said, ‘Yeah, Dad. I think you would win.’ I Kind of let it go and low and behold, you know, I get a phone call that they’re offering me to do a season of The Masked Singer.”

For Gibson, it turned out that getting to play this cybernetically enhanced porcupine character proved to be a way for him to just have a good time and not have to think about some of the challenges he’s faced in recent months — including his split from wife Samantha Gibson back in December.

“God has a sense of humor… I planned on being married for the rest of my life and had no idea that we would get here and then God says, ‘I’m going to put you into something very, very fun, child friendly, with jovial costumes,'” he said. “The moment that they slid Robopine’s head on me, I would just always turn around and look at the mirror and go, ‘This ain’t got nothing to do with what’s actually on in my mind.'”

Gibson shared similar sentiments after being unmasked on Wednesday’s episode. When asked by host Nick Cannon why he wanted to be a part of the fun reality competition series, the Fast & Furious star explained, “You know, when you have two daughters, you look for those moments to sit in front of the TV to do something fun as a family.”

“So here I am now in a Robopine outfit,” he shared, adding, “I just want to thank you all for the love.”

Wednesday’s episode kicked off with a high-energy performance from The Yeti, who delivered some impressive dance moves with his cover of Rob Base and DJ EZ Rock’s 1988 megahit, “It Takes Two.”

The Piglet continued to impress with his range as he belted out a cover of Phil Collins’ “Against All Odds (Take a Look at Me Now),” while The Black Swan showed her romantic side yet again with her rendition of “Do I Do,” by Stevie Wonder.

The Russian Dolls — only two of them this week — wowed with a cover of “Shallow,” and The Chameleon closed out the performances with a fun and unique rendition of Busta Rhymes’ “Put Your Hands Where My Eyes Could See.”

With Robopine gone, season 5 has whittled things down to their Top 5, and the Masked Singer quarterfinals will undoubtedly be a truly heated showdown and stunning showcase of masked talent.

If you’re trying to crack the mystery of the costumed contestants like the rest of America, check out our running list of spoilers, hints and best guesses, where we break down all the clue packages and make wild (surprisingly accurate) predictions about the singers’ secret identities.

Check out the video below to hear more about the wild and unexpected unmaskings that have already rocked the fifth season of The Masked Singer.

The Masked Singer airs Wednesdays at 8 p.m. ET/PT on Fox. For more on this exciting season, check out the video below!