Jon Favreau’s “The Mandalorian” returned for Season 2 on Disney+, boasting new and improved virtual production innovations, while introducing creatures such as the menacing Krayt Dragon and ice spiders. The tech highlight, though, was the launch of StageCraft 2.0, the virtual production game changer from Industrial Light & Magic. Offering a new in-house render engine called Helios, the immersive LED wall digital backlot at Manhattan Beach Studios in L.A. generated cooler-looking digital environments in real-time, and continued the illusion of being on location with interactive lighting and perspective-accurate camera tracking.

“Helios gave us higher resolution and more image fidelity,” said ILM VFX supervisor Richard Bluff. “The assets that were going into the environments could not only be rendered in real-time on the wall, but could also be easily rendered in any one of our render engines that we use in post-production. This allowed a lot of flexibility on the back end. We were basically supersizing the pixels being drawn to the screen.”

The other important improvement was extending the space outside the LED wall volume to provide greater scope. Thus, for the first time, ILM built physical sets adjacent to the volume, allowing the filmmakers to push a character from a physical set out all the way into the middle of the volume or vice versa. A good example occurs in Episode 5 (“The Jedi”), which takes place entirely outdoors on the planet Corvus, where Mando (Pedro Pascal) discovers from Jedi Ahsoka Tano (Rosario Dawson) that Baby Yoda’s name is Grogu. In a single shot, the camera tracks Mando through the burnt forest to the other side. 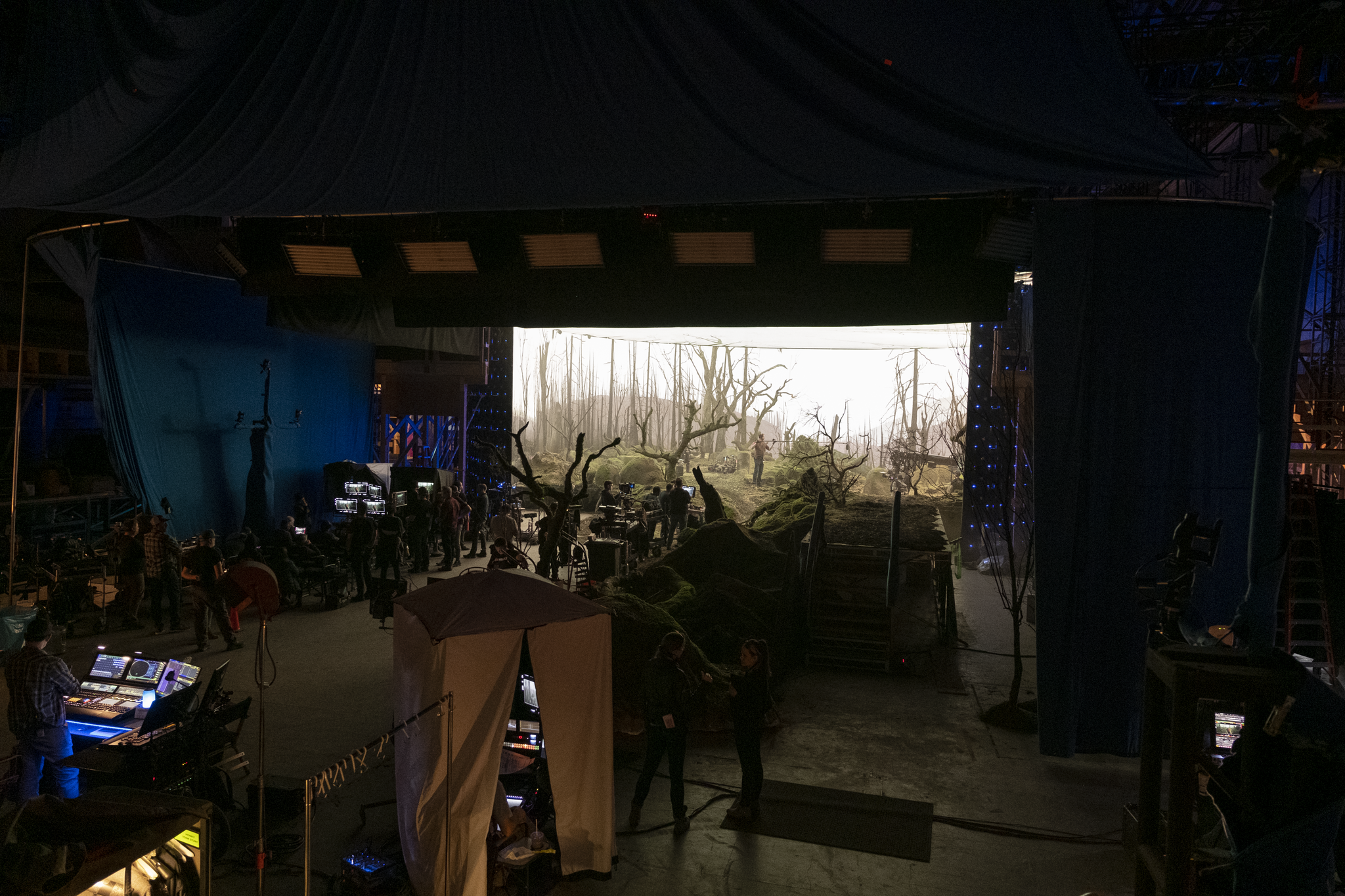 “Dave Filoni, who wrote and directed the episode, knew that the lighting condition on the planet didn’t rely on direct sunlight and was overcast, as this environment lived underneath the choking smoke of the burning forests,” added Bluff. “So not only did we have a soft box that was lighting the physical set outside the volume, but it was mimicked on the LED screen once [Mando] walked in, and, through the camera, you didn’t know where that transition happened. StageCraft 2.0 allowed the camera tracking and lighting to appear seamless going from physical set to inside the volume.”

Meanwhile, with “The Mandalorian” adding more creature work and epic action, multiple Emmy-winning VFX supervisor Joe Bauer (“Game of Thrones”) was recruited to assist ILM. “Joe brought a lot of great ideas and a different working style,” continued Bluff. “He took a great deal of interest in previs, and spent a lot of time with The Third Floor helping to design shots with the DP [Baz Idoine and Matt Jensen] and making sure that it creatively fit within the ‘Star Wars’ universe.”

Bauer helped out with the Krayt Dragon (“Chapter 9: The Marshal”) and ice spiders (“Chapter 10: The Passenger”). Shooting took place in an 80′ x 100’ LED volume operating StageCraft, on a sand-covered backlot at Manhattan Beach Studios (serving as Tatooine), and in stage-built sets of various configurations. “’The Marshal’ dusted off a ‘Star Wars’ favorite, the Tatooine Banthas, not seen since ‘A New Hope,’” Bauer said. “The Bantha model from Legacy Effects was key in establishing the scale of the Krayt, as the immense dragon had to be able to swallow the elephant-sized Bantha in a single bite.”

The acid-spewing Krayt first appeared as a carcass in “A New Hope,” and ILM art director Doug Chiang and his team designed the creature, and scaled it up to give the appearance that it was an adult. “But the interesting part of the dragon was that it originally had many legs,” said Bluff. “The idea being as the creature grows in size during adulthood, it actually grows more legs and so what audiences don’t realize is that underneath the sand we have a full creature body with all of these articulating legs. But, as Jon developed the story, he thought it was more compelling to bury the body beneath the sand, and, as the creature moved through the sand, it left the body a bit of a mystery.”

ILM added more detail as the head got closer to the camera, making sure that the surface under the eye had plenty of cracks in the skin, allowing the sand to cascade through them and fall off the face. For the inside of the mouth (inspired by snapping turtles), the sand had to roll over the tongue and go inside or outside the mouth.

The biggest challenge, though, was getting this massive creature moving through the sand in a way that was believable, since Favreau wanted the dragon to swim through the sand like a crocodile. This was achieved through a liquefaction effect, and the displacement of the sand on the surface was derived from the creature movement underneath. The sand sim work was done at ILM Singapore, overseen by multiple Oscar winner John Knoll, the studio’s chief creative officer. “Refinements often involved correcting scale and softening over-granularity,” Bauer added. “Overall dynamics were frequently spot-on at first review, once interactive parameters were established and creature animation was approved by [animation director] Hal Hickel and Jon. Because the creature blocking progressed from largely above ground to considerably below the sand surface, the movement performance was key to driving sand sims.”

The ice cavern-dwelling Krykna spiders were also a blast from the past, as Team Favreau dusted off unused concepts from legendary designer Ralph McQuarrie intended for “The Empire Strikes Back.” “We went a step further by not only having the mother spider but all the baby spiders that attacked [Mando’s space ship], the Razor Crest,” said Bluff. “The animation challenge came down to the number of limbs that the creature had, believing that the weight distribution across all of those limbs was working, but also moving them at the appropriate speed.”

“The spiders needed to kick up a lot of snow particles, traverse various slick surfaces in a hurry, and ultimately do significant damage to the Razor Crest,” added Bauer. “A particularly insightful direction from Jon was to light the giant mother spider as if she were in a 1930’s James Whale horror movie, sparse and dramatic, during the moment after she slams the escaping ship to the ground and then peers through its icy windscreen into the cockpit.”