If the vision of Jessica Chastain in a sleek LBD sniffing coke and then vigorously bedding Christopher Abbott during a bacchanal in Morocco stokes your flames, then John Michael McDonagh’s “The Forgiven” is the movie for you. “I wish I wasn’t so worried,” she says before jubilantly downing another line of white powder. She wishes she were more worried about her husband, played by Ralph Fiennes, a selfish doctor who, during their now-derailed vacation stay at an old-time friend’s deliciously depraved party in the desert, has run over a Muslim child and failed to cover it up. She wishes she cared that he’s now been carted off to the boy’s Berber village in middle-of-nowhere North Africa to do penance by the kid’s father, and where he could possibly be hung and quartered. Will she miss him at all?

Working from a novel by Lawrence Osborne, “Calvary” and “The Guard” director McDonagh treats his ensemble — and it’s an impressively cast one, including Matt Smith and Caleb Landry Jones as the oddly well-matched dandy hosts — like insects under a magnifying glass. With wide lenses and a detached, chilly reserve courtesy of DP Larry Smith, the English-Irish director and screenwriter seems wholly amused by tearing asunder a Dionysian display of the rich and bored, gathered for a debaucherous jamboree in the neocolonized North of Africa.

The cold front foaming between icy-chic, lissome children’s author Jo (Chastain) and her boorish, ruddy husband of 12 years David (Ralph Fiennes), an alcoholic doctor in a pressed linen suit, is immediate upon the film’s opening frames amid a stylish credits sequence that unfolds backward in blood-red lettering across the screen. After a boat’s journey to Morocco — “L’Afrique!” he exclaims as they hit the shore — the bored, disdaining vibes between the pair recall the bad vacations of Michelangelo Antonioni and Roberto Rossellini from the outset. As he reaches for another bottle of wine, David calls Jo “shrill,” and she calls him “a high-functioning alcoholic.” Their marriage is over, just not over.

They’re in Morocco to see Richard (Smith) and Dally (Landry Jones), a hedonistic twosome who’ve arranged a lavish fete at their renovated ksar (once a fortified village now turned into a palatial party pad) in the High Atlas Mountains, and it’s a party scaled for the end of the world. But on their way to the celebrations, deep in the snaking crevices of the mountains, with David careening and fully lubricated at high speed, a terrible accident ensues: They hit and kill a young boy who steps out into their streaking path.

The film is, from there, careful to parse out the particulars of just what went down at impact, with McDonagh teasing the encounter in pointed flashbacks throughout the otherwise forward-moving film. Harried and disheveled, Jo and David make it to the ksar anyway, and promptly start imbibing among Richard and Dally’s clown car of mixed company — a financial-analyst lothario Tom Daly (Abbott), a jittery Australian model (Abbey Lee), and a très French New York Times Style section photographer (Marie-Josée Croze) among them. It’s a motley crew that McDonagh will set out to skewer, with varying degrees of attentiveness, for the next two hours. 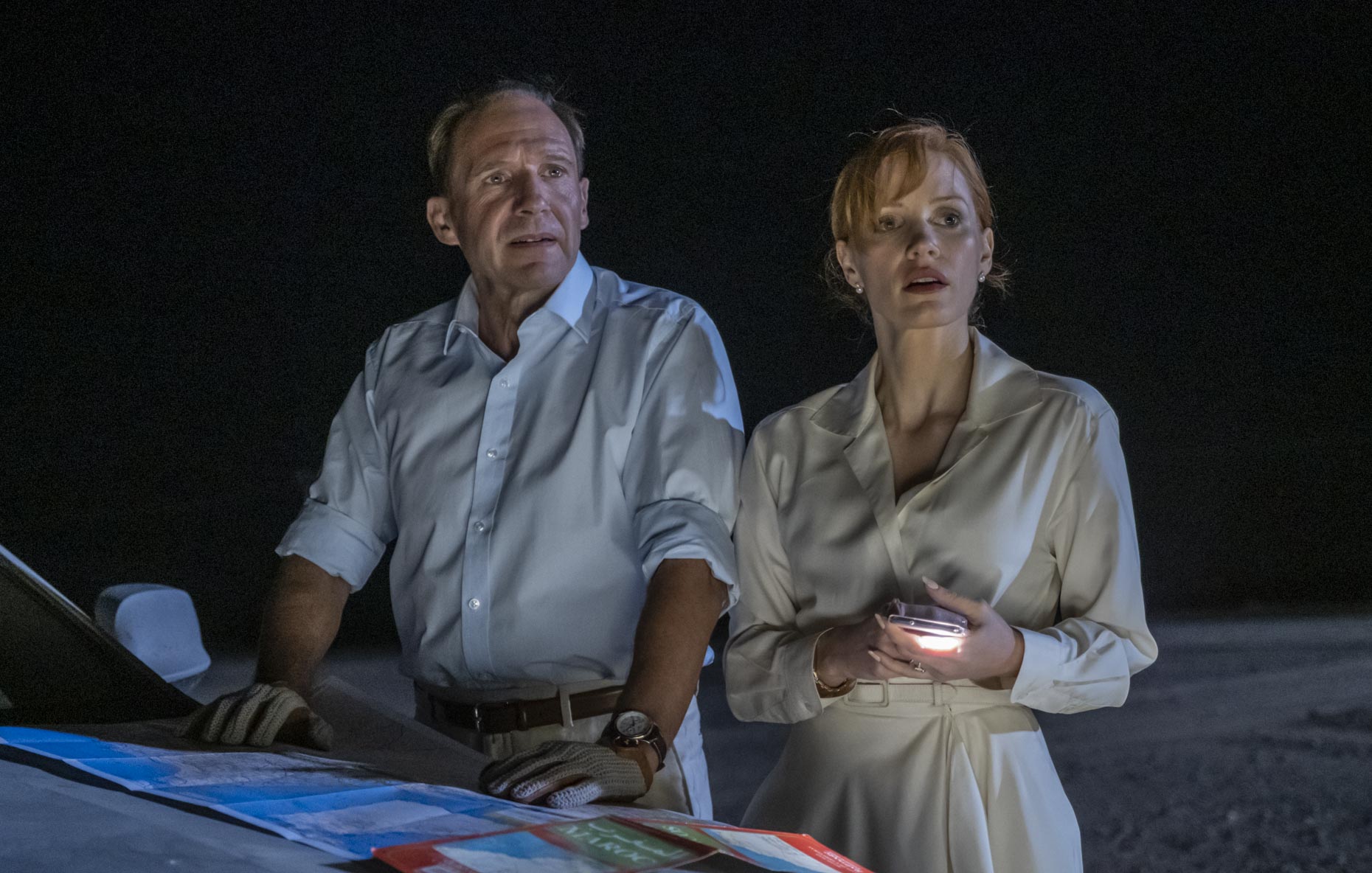 Questioned by local police, David is predictably oblivious to his stake in the crime that occurred. “It was as if he didn’t understand the speed of a car,” he says of the dead boy (whom we later learn, through repeated attempts by the ksar staff to give the poor kid a name, is called Driss). At the imperious gates of the ksar soon arrives Driss’ father Abdellah (Ismael Kanater), who requests David’s presence at his village to honor the boy’s life and atone for the killing. “What the fuck? They could be ISIS!” snaps Jo. Nevertheless, David is worn down into submission, and shuttled off in a crummy Jeep to meet whatever his fate might be.

His absence for the remaining festivities allows Jo to unzip into hair-down sensuous freedom, and Chastain is gamely having the time of her life in this role. She strikes up a rapport with Tom in witty exchanges that crackle with old-timey (if occasionally overwritten) charm. “We should get out of the sun before we start to bleed,” he says. “I don’t bleed easily,” she replies. And later, “I think men need sluts,” she says. “I think women need to be sluts,” he says, before the two end up making out on a sunchair in the presence of the other guests, wasted and indifferent to her adultery.

The vibratory chemistry between Chastain and Abbott is the film’s greatest appeal, whether on a coke bender or dirty dancing in a kind of psychosexual sandwich moment between the posh party hosts. “There you are!” Jo says into the mirror, electrified after a night of rigorous, cheating sex — a line you can see coming from the sky as Chastain marvels at her own unwound reflection. Jo’s freefall into realizing her marriage is a sham feels undercooked relative to the movie’s broader treatise on the disintegration of Western mores when taken out of their element, but Chastain makes such a fashionable descent thrilling to watch. Her performance brings to mind a more unhinged spin on Jeanne Moreau in Antonioni’s “La Notte,” another woman unpeeling herself from a lousy husband during a bleak sojourn that never stood a chance at healing a marriage.

But amid the film’s hedonistic party sequences and jittery coked-out banter — hell is a room full of French, American, and British people on uppers — a far meaner moral streak cuts through McDonagh’s lengthy, sprawling movie. Back at Driss’ village — one outfitted with no amenities of a post-historic century — David faces the tribunal of the boy’s family. There’s also the matter of Driss’ accomplice in what turned out to be an attempted robbery gone wrong. As punishment for participating in Driss’ death, the father makes the boy promise to do whatever he asks, which we know will eventually not bode well for the defiantly unremorseful David down the line.

A more reined-in version of his character from “A Bigger Splash,” Fiennes plays the sort of moneyed, arrogant arsehole he so excels at, making David hardly sympathetic but never less than compelling. No one else could have played this role. David slowly forms a fraught bond with one of his escorts, Anouar (Saïd Taghmaoui), in a touching near-finale moment that almost approximates something like redemption for the guilty David. But the cast’s standouts turn out to be Smith and Landry Jones, who hover along the edges of the film in outré regalia that wouldn’t find them out of place as loony side characters in a Shakespeare romp.

Shot on location in Morocco, “The Forgiven” smacks of the kind of project wrought from the constraints of the pandemic — an arid, isolated desert setting; an intimate cast and crew — but McDonagh was already in production on the film before Covid hit. The film nevertheless acquires an eerie end-times vibe, a raucous Boschian, fuck-it-allness juxtaposed against a grimmer, slimmer tale of the West and the East colliding, and the West facing up to its sins of the past. The sun-bleached vistas of the ksar make for a jutting contrast to the hand-to-mouth existence of the locals, who by Muslim edict seem to accept their bleak reality while the greedy white visitors clamor for decadent fulfillment. While this nasty film seems headed toward a conclusion where the rich win and the status quo is maintained, that’s abruptly shattered by a violent climax that assures that no one on either side of the divide is left without a bloodstain.

“The Forgiven” world premiered at the 2021 Toronto International Film Festival. It is currently seeking U.S. distribution.