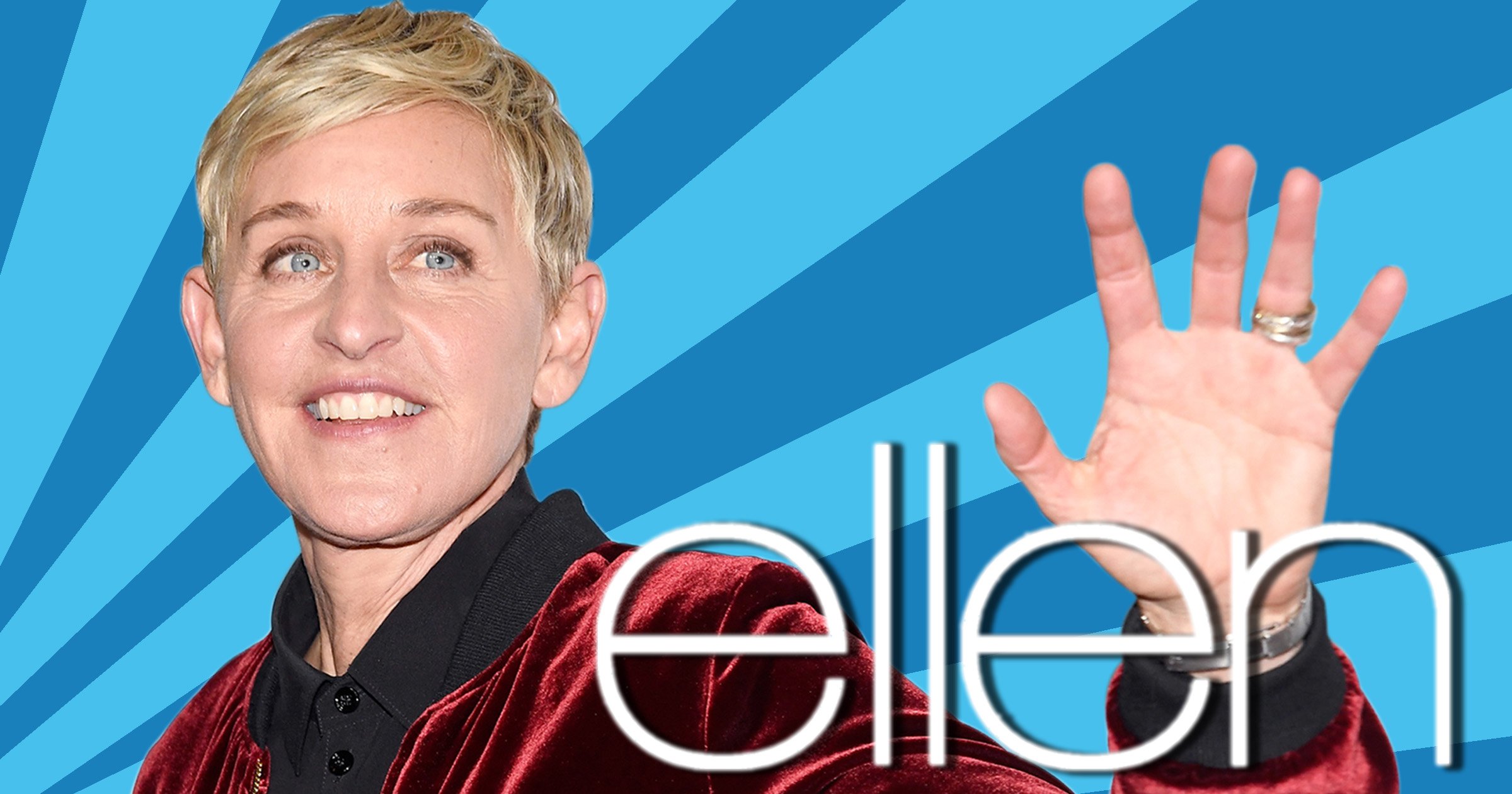 Ellen DeGeneres has confirmed she is ending her talk show after 19 seasons.

The Hollywood Reporter states the 63-year-old sat down with her staff to inform them of the news on May 11, and will discuss her decision further in a chat with Oprah Winfrey on May 13.

‘When you’re a creative person, you constantly need to be challenged – and as great as this show is, and as fun as it is, it’s just not a challenge anymore,’ she told the publication.

‘Ellen was and is an indelible piece of the television landscape, and it will be sorely missed,’ Mike Darnell, Warner Bros Unscripted TV President, added.

Sources added to the Mail Online that DeGeneres’ ratings have ‘been truly appalling’ since allegations emerged over a ‘toxic workplace’ behind the scenes.

What happened to The Ellen Show?

The Ellen Show came under fire about poor communication regarding their pay during lockdown.

The Ellen DeGeneres Show’s main stage crew, consisting of at least 30 employees claimed thet they had received ‘no written communication’ about various issues including pay and working hours.

They also went on to allege that producers haven’t inquired about their mental and physical health for over a month.

A spokesperson for Warner Bros. Television told Variety at the time that the crew was still getting paid, despite their hours being reduced.

‘Our executive producers and Telepictures are committed to taking care of our staff and crew and have made decisions first and foremost with them in mind,’ the spokesperson commented.

The studio also confirmed that the crew had been paid consistently, though at reduced hours.

Months later, the show was hit with allegations that the workplace was shrouded in racism, fear, and intimidation.

From being fired for attending two family funerals to producers joking two Black staff members could cause confusion for looking similar, 10 anonymous former employees and one current shared horrifying allegations.

They stressed to Buzzfeed that the allegations were against the show, and not DeGeneres, but urged her to take more responsibility on set.

The show’s executive producers later said they were ‘heartbroken’ by the claims.

They released a joint statement, which read: ‘Over the course of nearly two decades, 3,000 episodes, and employing over 1000 staff members, we have strived to create an open, safe, and inclusive work environment.

‘We are truly heartbroken and sorry to learn that even one person in our production family has had a negative experience. It’s not who we are and not who we strive to be, and not the mission Ellen has set for us.’

‘For the record, the day to day responsibility of the Ellen show is completely on us,’ they continued.

The show was placed under internal investigation following the allegations.

Warner Bros.Television and television executives from the production company sent a memo out to staffers about the accusations.

In the note, they announced WarnerMedia’s employee relations group and a third party firm would be holding interviews with staff of The Ellen Show to discuss their own experiences.

DeGeneres broke her silence to apologise to staff in an internal letter after the investigation confirmed ‘deficiencies in day-to-day management’ on set of her chat show.

‘I told everyone in our first meeting that The Ellen DeGeneres Show would be a place of happiness – no one would ever raise their voice, and everyone would be treated with respect,’ the note, first acquired by Hollywood Reporter, said.

‘Obviously, something changed, and I am disappointed to learn that this has not been the case. And for that, I am sorry.’

Affirming that she still believes in the show’s motto of ‘being kind to everyone’, DeGeneres said some people ‘didn’t do their jobs’ as she left them to take over elements of the series.

She also seemingly denied knowing anything negative was going on behind-the-scenes, adding that people who work with her ‘are speaking on her behalf and that has to stop’.

She agreed to ‘take responsibility’ for the show as it was under her name, and added she was working alongside production company Warner Bros in order to heal the issue.

‘I am so proud of the work we do and the fun and joy we all help put out in the world,’ she concluded.

‘I want everyone at home to love our show and I want everyone who makes it to love working on it. Again, I’m so sorry to anyone who didn’t have that experience.’

When approached for a comment by Metro.co.uk, Warner Bros issued a statement, which read: ‘Warner Bros. and Ellen DeGeneres take the recent allegations around the show’s workplace culture very seriously.

‘We hoped to determine the validity and extent of publicly reported allegations and to understand the full breadth of the show’s day-to-day culture. As a result, WarnerMedia interviewed dozens of current and former employees about the environment at The Ellen DeGeneres Show.’

Following DeGeneres’ apology, more allegations about the show emerged, with two anonymous guests on the show alleging that they were told to repeatedly compliment the host on air.

According to Page Six, two guests were told by producers while prepping for their interview three years ago: ‘Compliment Ellen, tell her what a big fan you are.’

There was no suggestion that this request came from DeGeneres herself.

Following the allegations, the actor claimed that the toxic behaviour ‘came from the top.’

He claimed on Twitter: ‘Sorry but it comes from the top ⁦@TheEllenShow… Know more than one who were treated horribly by her.⁩ Common knowledge.’

DeGeneres did not address his claim.

Scooter Braun and Katy Perry were among the first celebs to defend DeGeneres amid the allegations.

Braun said on Twitter: ‘People love to take shots at people. They love to see people fall. How quickly so many forget.

‘@TheEllenShow is a kind, thoughtful, courageous human being who stands for what is right and highlights on her show the best of us. She has helped change the views for equality…’

Perry later added: ‘I know I can’t speak for anyone else’s experience besides my own but I want to acknowledge that I have only ever had positive takeaways from my time with Ellen & on the @theellenshow.

‘I think we all have witnessed the light & continual fight for equality that she has brought to the world through her platform for decades.

Reports that DeGeneres was ready to call it a day came as early as last year.

An insider told Mail Online that she was ready to shut down the show, but an executive producer later denied those claims.

Former producer Hedda Muskat, who worked on the show when it launched, claimed the comedian ‘laughed’ when one of her executives ‘screamed’ at staff.

She told TheWrap: ‘I had never seen this before. I had never been around a toxic host.’

Ratings for the show reportedly plummeted in the months following the allegations.

According to the Wrap, viewing figures hugely dipped, with the daytime show garnering a 1.0 Live + Same Day rating for the week commencing July 26.

This was down 29% from the same period last year, and down 9% from the week beforehand.

It must be noted that other talk shows – including Dr Oz and The Real, also showed declines amid the pandemic, but faced smaller drops than DeGeneres’ show.

Speaking out in support of DeGeneres, Boss, who works with her on the show, told Us Magazine: We can’t speak too much legally about it, but I’ll say this, there’s been love.

‘Obviously there’s some things to address, but from my standpoint and from countless others, there’s been love.’

The publication reporeds DeGeneres confirmed the staff overhaul in a Zoom chat, announcing there was an internal investigation underway.

Discussing the claims she’s ‘not nice’, she reportedly told staff: ‘I’m a multi-layered person, and I try to be the best person I can be and try to learn from my mistakes.

‘And it just became a well-oiled machine, and I think that is the problem.’

She added: ‘It’s not a machine. This is people. These are human beings that are working hard every single day to put this together. This show would not be what it is without all of you.’

In the short clip, he stated: ‘Oh look who it is. If it isn’t Andy Lassner. Well, yes it is. Your eyes do not deceive you. I’m back.

‘I’ve been away for a little bit, dealing with — you know, some stuff. You may have read about it. It’s been a couple of rough months.’

DeGeneres spoke out on her show about the allegations, saying: ‘As you may have heard, this summer there were allegations of a toxic work environment at our show and then there was an investigation.

‘I learned that things happened here that never should have happened.

‘I take that very seriously and I want to say I am so sorry to the people who were affected.

‘I know that I’m in a position of privilege and power and I realised that with that comes responsibility, and I take responsibility for what happens at my show.’

Demi Lovato led the celebs praising DeGeneres after her statement addressing the claims.

She penned: ‘You are the person people see on tv. You are kind, generous and caring. This video was a perfect representation of that. I love you Ellen.’

One episode saw the talk show host make fun of several of the accusations made by ex-staffers who claimed senior producers mistreated other workers.

Degeneres was heard saying: ‘I’m excited to see all of my staff and my crew. Hi, everybody. Please don’t look me in the eye. I’m kidding. But I will be passing out gum for everyone. Kidding again. I can laugh now.’

The gags were in reference to specific claims that staff were not allowed to look her in the eye and had to hold gum discarded from her mouth.

Buzzfeed News spoke with both former and current staffers who ‘found her monologue to be disingenuous and tone-deaf given the severity of their experiences.’

According to reports, the show’s audience went on to drop by 37 per cent following the allegations.

According to viewing figures seen by Variety, the host’s first week back drew in an average of 1.7m viewers per episode, a staggering 37 per cent decrease than in the same week in 2019.

The publication also reported that while DeGeneres’ decrease was larger than other talk shows, the majority of syndicated programmes experienced significantly lower viewing figures than this time last year.

DeGeneres spoke out again on the scandal, praising her wife Portia de Rossi.

She told People magazine: ‘It broke my heart; I couldn’t have gone through everything I went through without her.

‘It was a horrible time in my life, and she was a rock. She kept me going and tried to help me put things in perspective.’

Following reports, DeGeneres confirmed that the show will come to an end after the 2021/2022 seaon.

‘When you’re a creative person, you constantly need to be challenged – and as great as this show is, and as fun as it is, it’s just not a challenge anymore,’ she told The Hollywood Reporter.

‘Ellen was and is an indelible piece of the television landscape, and it will be sorely missed,’ Mike Darnell, Warner Bros Unscripted TV President, added.

She will discuss her decision more in a conversation with Oprah Winfrey on May 13.

Got a story? If you’ve got a celebriy story, video or pictures get in touch with the Metro.co.uk entertainment team by emailing us [email protected], calling 020 3615 2145 or by visiting our Submit Stuff page we’d love to hear from you.