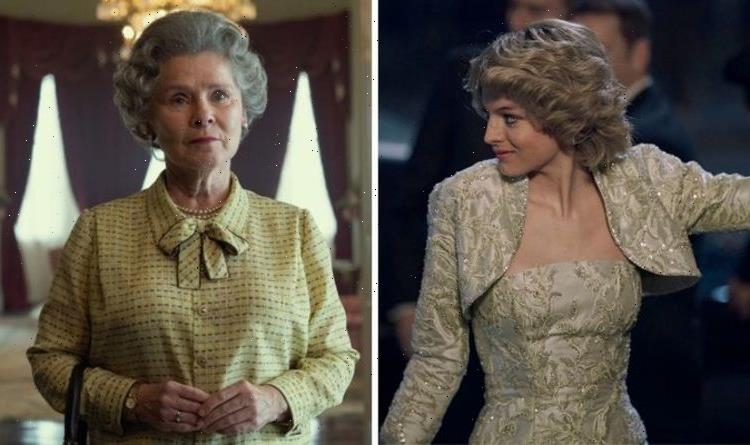 Emma Corrin and Josh O'Connor discuss working together in the Crown

Ever since The Crown series landed on Netflix in 2016, the drama hasn’t shied away from presenting the realities of Royal history. But the period of the show is edging closer to the present day, and series five will be set during the 1990s – a turbulent and eventful time for the Royals. A historian has admitted the series will likely get very “uncomfortable” for them.

Filming is currently underway for the latest season, which fans of the show are desperate to watch.

The 1990s was a brutal decade for the Royal Family, with the infamous breakdown of Prince Charles and Princess Diana’s marriage making headlines for years.

On top of this were the Windsor Castle fire and the notorious Panorama interview.

In 1997, Princess Diana tragically died in a car crash in Paris, shocking the world and leading to further questions about Buckingham Palace.

Royal historian Anne Whitelock has warned that the upcoming series will be a difficult watch for some Royals.

Speaking to the Mirror, she stated: “If the Royal Family have found The Crown uncomfortable viewing up until now, this season is not going to give them any respite.”

The upcoming series is set to come to Netflix in 2022, and the timing of the new series is bound to add to the controversies.

The Royals are once again making headlines in the present day, with frequent updates on Harry and Meghan’s exit and repercussions from the bombshell interview with Oprah Winfrey back in March.

Additionally, Prince Andrew is in the spotlight at the moment as he could face a lawsuit for alleged sexual abuse.

Prince Harry himself was asked if he watches the Crown and admitted the show is “loosely based on the truth.”

In the aftermath of Prince Philip’s death in April, the show was called into question over accuracy after it emerged that the Duke was allegedly upset by one episode in particular.

One scene was dubbed “shockingly malicious” for the way it presented a tragedy in Prince Philip’s childhood.

The season two instalment of The Crown shows flashbacks to the death of Prince Philip’s sister when she was only 26.

Royal experts said the portrayal of the incident deeply upset the Duke at the time, and another backlash came about following his death.

Prince Philip’s sister, Princess Cecilie of Greece and Denmark, died in 1937 alongside her husband, two sons, mother-in-law and unborn baby in a plane crash.

The Duke of Edinburgh was 16 years old at the time, and the incident was portrayed in the series.

The hit Netflix show was criticised because it depicted scenes that implied Prince Philip was blamed for the incident, which insiders claim is untrue.

In the funeral scene, the Duke’s father, Prince Andrew, tells him: “You are the reason we are all here, burying my favourite child.”

The reason Prince Philip was blamed in the drama is that the show suggests that Cecilie was on the plane because her brother had been banned from visiting her in Germany due to his behaviour at his school.

A royal expert said the Duke was hurt by the episode and has spoken out against it in light of his death.

Royal biographer Sally Bedell Smith said: “[Philip] had nothing to do with his sister’s death. Cecilie did die in an air crash but that’s the only thing that was true.

“Everything else was invented in a shockingly malicious way.”

But with more scandalous moments inevitably set to be explored in season five, Anne believes the worst scenes for the Royals are yet to come.

The Crown is available to stream on Netflix.