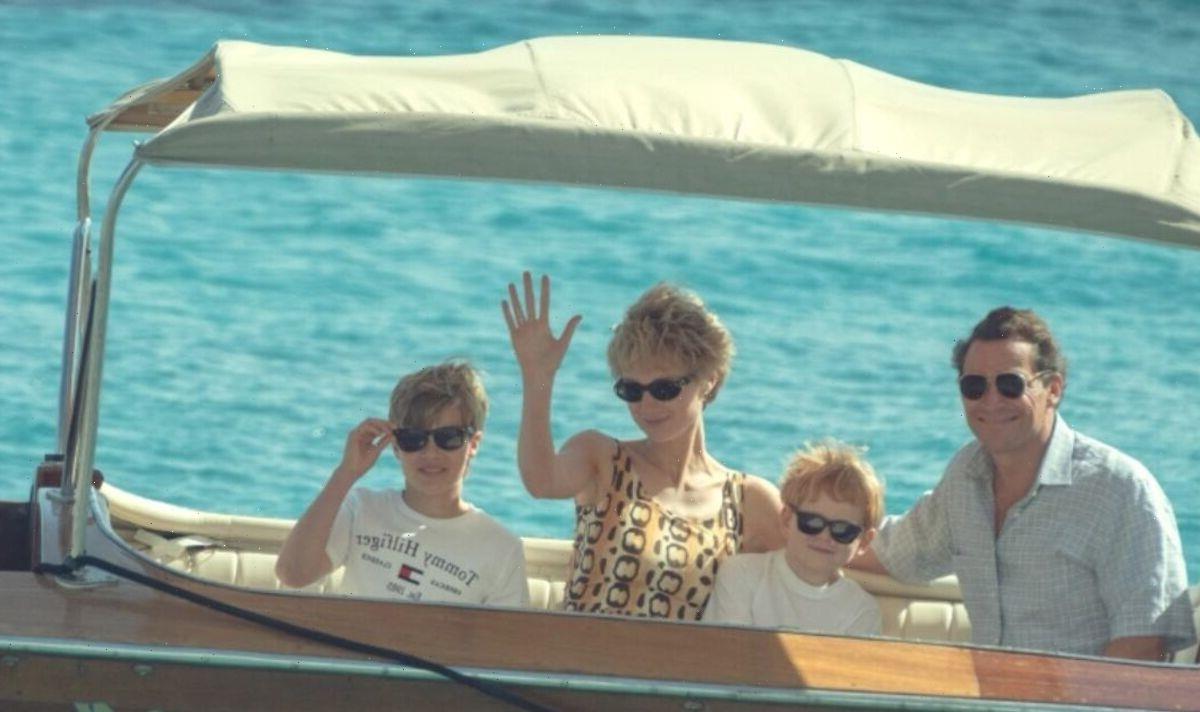 Netflix’s hit historical drama, The Crown will make its highly anticipated return in November with season five. Ahead of its premiere, the streaming giant released images of the instalment, including the first photos of Prince William (played by Rufus Kampa) and Prince Harry (Will Powell).

Since The Crown first aired in 2016, it became a huge success with viewers as it retold dramatised events of Queen Elizabeth’s reign.

As season five approaches, the instalment will see a host of new actors portraying the Royal Family during one of their most turbulent decades.

Viewers will watch the ’90s played out, including the depiction of one of the biggest divorces for the Royal Family.

Fans can now gain insight into season five as Netflix’s Tudum released photos of the characters.

One of the images includes Dominic West as Prince Charles on a yacht beside Princess Diana (played by Elizabeth Debicki) with their sons Prince William and Prince Charles.

There is also a look at Imelda Staunton as Queen Elizabeth and Prince Philip who will be portrayed by Jonathan Pryce.

The third image showed a sorrowful Princess Diana, while Prince Charles and Camilla Parker Bowles (Olivia Williams) looked cosy together in another snap.

A first look at Lesley Manville as Princess Margaret was included alongside a photo of Princess Anne (Claudia Harrison).

As well as a collection of photos of the Royal Family, fans were also treated to a glimpse of the former Prime Minister of the United Kingdom, John Major who will be played by Johnny Lee Miller.

Aside from Prince Charles and Princess Diana’s painful divorce, the Royal Family were also met with another challenge.

During the ‘90s, the public openly questioned their role in Britain, which fans can expect to see depicted in season five.

Although these historical events have been dramatised for TV, key moments had been well documented and interpreted by journalists, biographers and historians.

Princess Diana star Elizabeth opened up about the season and shared: “That’s the amazing thing about playing these people at this time, because in the journey of The Crown so far out of all the seasons, this is the most visual content we have of the Royal Family.”

She told Tudum: “In the ‘90s everything had started to be filmed and also it was the birth of the 24-hour news cycle so there’s just this incredible amount of content that we have access to.”

Viewers will also will the tragic aftermath of the divorce as season five will introduce Dodi Al-Fayed (Khalid Abdalla), who died in the car crash alongside Princess Diana.

Imelda spoke on her role as Queen Elizabeth and said: “What has been nice, and I hope I don’t prove them wrong, is people saying, ‘I’m really looking forward to seeing her as the queen.’

“So, let’s just hope that works out for them because I’ve done it. Nothing I can do about it now!”

While Dominic told Tudum: “I think people understand because the cast has changed every two seasons, that this is not an imitation, this is an evoking of a character.”

The Crown season 5 premieres on Netflix on Wednesday, November 9