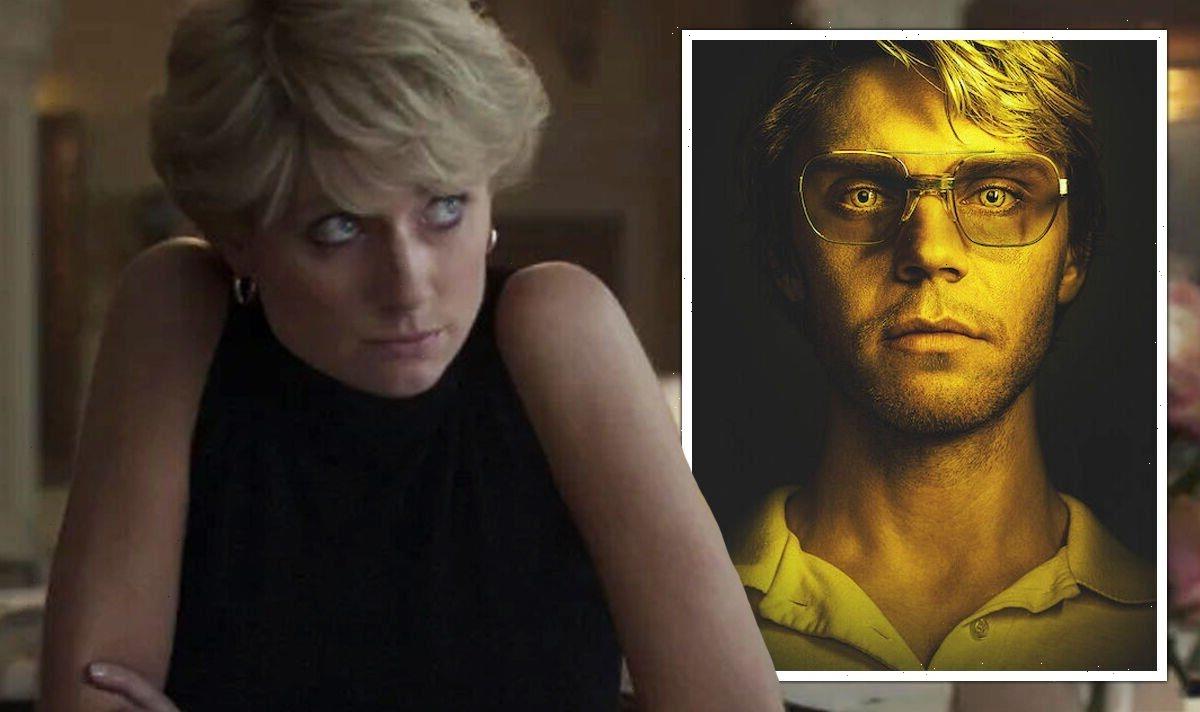 Netflix has scored big this year with two US crime dramas, Dahmer – Monster: The Jeffrey Dahmer Story and The Watcher, both scoring well over 100 million hours watched by subscribers in their first week of release. Although the Royal Family drama was waiting in the wings to potentially dethrone Ryan Murphy’s latest efforts, The Crown’s fifth season wasn’t able to topple the true crime sensations.

This year’s highly anticipated season of The Crown has failed to match the staggering ratings of 2022’s biggest Netflix hits, according to the streamer’s latest figures.

Within its first week of release, season five has reached the top of Netflix’s English-language charts with an impressive 107.39 million hours watched.

Figures were taken between November 7 and 13 while the series itself returned on November 9.

With just five days of viewing recorded, this is still a number to boast about for Netflix’s reigning historical hit.

However, the latest offerings from Peter Morgan’s sumptuous royal drama has failed to make a dent against the platform’s current hits of 2022.

Its latest figures have still put surprise hit Dahmer at the top of this year’s charts, with an incredible 196 million hours watched.

Plus, producer Ryan’s second Netflix release of the year, The Watcher, follows close behind with 125 million hours.

The success of the two shows continues a winning streak for the TV master, who is also known for American Horror Story, Hollywood and Ratched.

However, it appears subscribers may have heeded the recent panning The Crown has received from both royal commentators and real-life figures who are depicted in the new season.

Former Prime Minister John Major, who is portrayed by Jonny Lee Miller, recently dismissed the show as a “barrel-load of nonsense”.

And Tony Blair, who was PM when Princess Diana (Elizabeth Debicki) died, called some of its scenes “complete and utter rubbish”.

The latest backlash prompted the streamer to add a disclaimer warning viewers the series is a “fictional dramatisation” and “inspired by true events”.

Even so, fans are clearly still eating up the latest slice of royal scandal, with Netflix reporting 1.1 million people in the UK tuned in for the first episode last Wednesday.

However, the series’ drop in the ratings and middling reviews for the latest offering hasn’t put The Crown in good stead heading into its sixth and final season.

This time around, Imelda Staunton takes the role of Queen Elizabeth II, while her husband Prince Philip is portrayed by Jonathan Pryce.

Popular new season launches from Netflix this year also include Manifest season four, with 57 million and From Scratch season two, with 72.

Meanwhile, Dahmer’s success has prompted Netflix to renew Monster as an anthology series, with two seasons based on “other monstrous figures” to be announced.

The Crown season 5, The Watcher and Dahmer are all available to stream on Netflix.