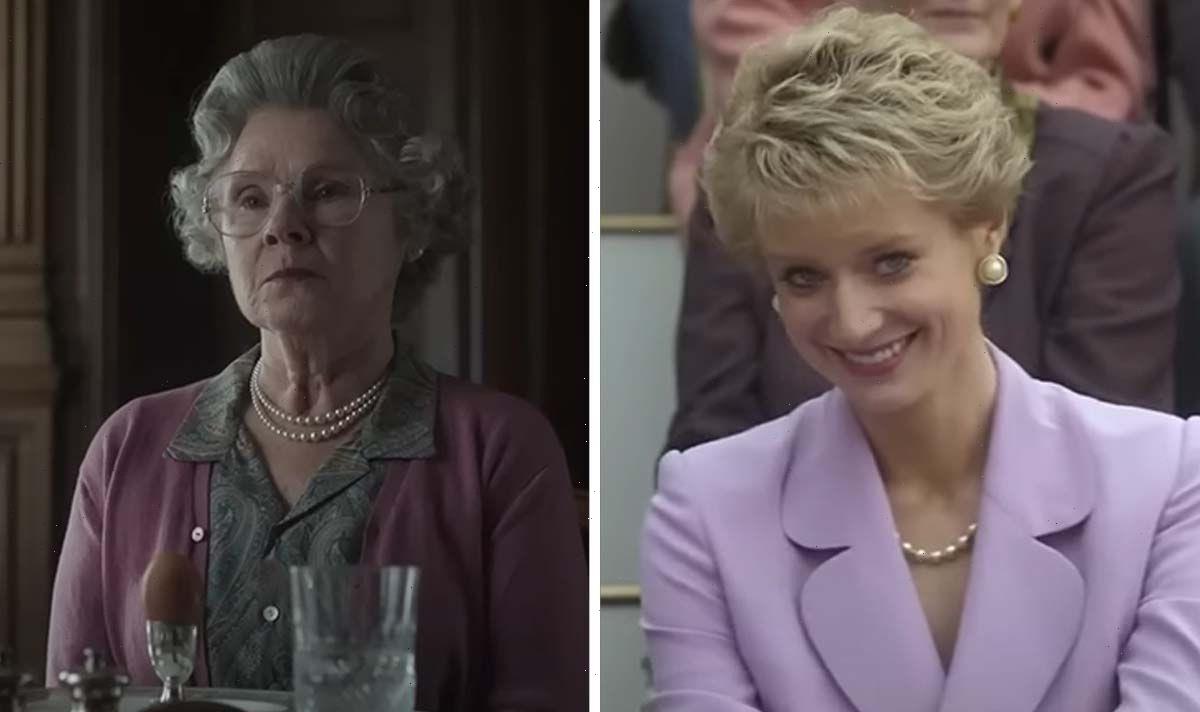 The Crown season five will now include a reminder to viewers the upcoming episode is a dramatised version of events. The move comes as critics including Dame Judi Dench voiced concern over the Netflix shows’ fans believing every storyline the drama explores.

When fans stream the much-anticipated royal drama, they will now see the disclaimer appear in the show’s description.

This warning states: “Inspired by real events, this fictional dramatisation tells the story of Queen Elizabeth II and the political and personal events that shaped her reign.

It continues: “It’s a new decade, and the royal family are facing what may be their biggest challenge yet: proving their continued relevance in ‘90s Britain.

“As Diana and Charles wage a media war, cracks begin to splinter the royal foundation.”

The move comes after Oscar-winning actress Dame Judi Dench wrote a letter to The Times hitting out at the show’s portrayal of historical events.

She wrote: “The closer the drama comes to our present times, the more freely it seems willing to blur the lines between historical accuracy and crude sensationalism.

“Given some of the wounding suggestions apparently contained in the new series — that King Charles plotted for his mother to abdicate, for example, or once suggested his mother’s parenting was so deficient that she might have deserved a jail sentence — this is both cruelly unjust to the individuals and damaging to the institution they represent.

“No one is a greater believer in artistic freedom than I, but this cannot go unchallenged. Despite this week stating publicly that The Crown has always been a ‘fictionalised drama’ the programme makers have resisted all calls for them to carry a disclaimer at the start of each episode.

“The time has come for Netflix to reconsider — for the sake of a family and a nation so recently bereaved, as a mark of respect to a sovereign who served her people so dutifully for 70 years, and to preserve their own reputation in the eyes of their British subscribers.”

Some fans of The Crown also threatened to boycott the highly anticipated new instalment.

As of Thursday, the streaming platform had still not added the warning to viewers, but they regaled on their stance for the new trailer.

In the new trailer for the controversial fifth instalment, the main themes from the Royal family during the 1990s are highlighted.

During the tense preview, the Queen (played by Imelda Staunton) can be seen addressing the nation, declaring: “In light of events of the last twelve months perhaps I have more to reflect on than most.”

Commentators of the time are also depicted, footage from Sir Trevor McDonald asking at the time: “Have royal scandals damaged the nations’ reputation?”

One man depicted in the new drama is politician and former Prime Minister, Sir John Major.

He added the Netflix hit is “a barrel-load of nonsense peddled for no other reason than to provide maximum – and entirely false – dramatic impact”.

“Discussions between the monarch and prime minister are entirely private and – for Sir John – will always remain so.”

However, screenwriter Peter Morgan has defended the new series, which was moved back following the death of the Queen.

He told Entertainment Weekly: “I think we must all accept that the 1990s was a difficult time for the royal family, and King Charles will almost certainly have some painful memories of that period.

“But that doesn’t mean that, with the benefit of hindsight, history will be unkind to him, or the monarchy. The show certainly isn’t.

“I have enormous sympathy for a man in his position – indeed, a family in their position.”