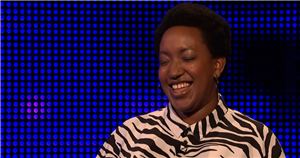 The Chase host Bradley Walsh couldn't help but share a cheeky quip to contestant Jen after she revealed she worked as a bra fitter.

Jen stated that she worked as a bra fitter for a lingerie brand, which left the TV host mind-boggled for a moment.

When Bradley asked what Jen does for a living, she said: "I'm a bra fitter", leaving the host staring at the camera as he gave a cheeky smile.

He simply responded: "Okay…" which saw Jen add that she works in a retail lingerie company, before Brad asked what she does in her spare time and how she would spend the money.

She said she makes dresses for her daughter, who is two-years-old, which saw Bradley chirp: "Ooh that's a handful isn't it? It definitely is."

Jen revealed that she is a big fan of anime and would love to take her daughter and her partner to Japan to attend an anime-based theme park.

Taking to Twitter, viewers couldn't help but piece together Brad's comments as they were convinced he had made the comment on purpose.

While another added: "Brad talking about 'a handful' with the bra fitter (laughing emoji)."

Others were cracking up at Bradley's reaction, with one user writing: "'I'm a bra fitter', *Brad's mind plunges straight into the gutter*."

And it won't be the last time that Brad gets the opportunity to share some laughs with Jen, who managed to get through to the final chase up against Darragh Ennis with £4,000 banked.

Jen sailed through on mostly luck, leaving both she and Bradley utterly gobsmacked that she managed to get back home.

She wasn't short on her luck, and she didn't mind sharing it around the team as player Fergus, who Bradley compared to Shaggy from Scooby Doo in a savage swipe, also went up against Darragh.

Fergus faced a challenging round, but on the last question he took a lucky guess and managed to take home his £5,000 back to the bank.

A gobsmacked Bradley was baffled at their success as he hailed them "Flukey Ferg and Jammy Jen", as the duo prepare to face the chaser in the final chase.