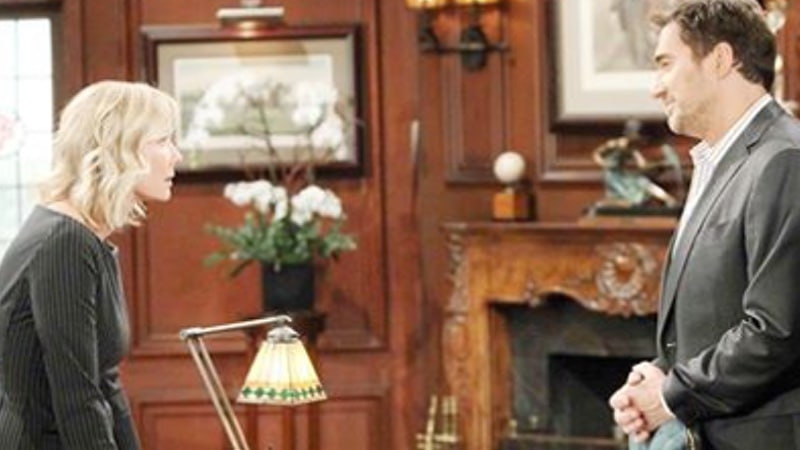 The Bold and the Beautiful spoilers for the Wednesday November 14, 2018 episode of the CBS soap promise a day full of mounting tension as several bold and beautiful people discover a jaw dropping bombshell threatens a loved one. Meanwhile, two former enemies make nice in an effort to bring down the Wicked Witch of the West.

Brooke (Katherine Kelly Lang), Ridge (Thorsten Kaye), and Katie (Heather Tom) are unsettled to realize the depths to which Dollar Bill (Don Diamont) will go to in order to win. He and his henchman Justin (Aaron D. Spears) hit pay dirt in their quest to reveal Ridge’s connection to fixing the custody battle.

By the way, how hilarious was the scene in which Bill and Justin spied on Ridge as he and the judge spilled their tortured guts about their nefarious collaboration? The scene was hysterical as these two lurked on a hilltop inside a blackened out SUV, with microphones and hearing scoops as large as satellites. Ridge and the judge sang like canaries which means Bill’s now in the catbird seat!

Bridge and Katie now must wait and be patient. Bill has revealed his secret intel and everyone knows the power he wields with the damaging info. Ridge could be sent to prison. Or worse, he could live a lifetime under Bill’s thumb. Which is worse?

Meanwhile, Pam (Alley Mills) and Donna (Jennifer Gareis) are thick as thieves. On Monday they traded snarky barbs with Quinn (Rena Sofer) and realized that each hates the raven haired beauty to the ends of the earth. Which means they have a delicious agenda in common.

Following this realization, Pam asked Eric (John McCook) to allow Donna to co-work with her again. It’s a brilliant scheme, really, killing two birds with one stone. First it allows Eric and Donna to flirt it up, which will twist Quinn’s knickers to no end.

On Wednesday these two walk down memory lane in an episode you don’t want to miss!

The Bold and the Beautiful airs weekdays during the day on CBS.