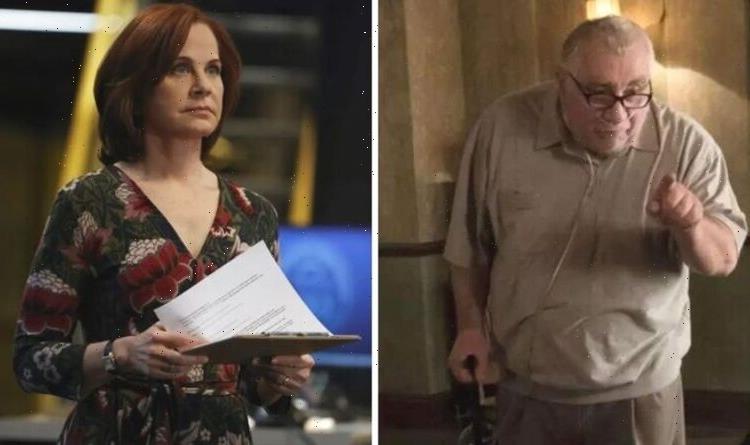 The Blacklist returns on Friday on NBC

NBC’s beloved crime series is set to return to NBC for another instalment of the task force solving thrilling cases. However, viewers will be in for a treat as two fan-favourite characters will make a huge comeback in the upcoming episodes of The Blacklist

It was previously announced Cynthia Panabaker (played by Deirdre Lovejoy) would make an appearance on the 14th episode of The Blacklist.

Although fans were suspicious she could be the one behind Cooper’s (Harry Lennix) mysterious phone calls, Panabaker’s return is expected to be for more personal reasons.

Viewers will also get a rare glimpse into her personal life after her daughter-in-law goes missing.

Assuming she would ask for the Task Force’s help to track her down, this could be an emotional episode for the character.

READ MORE: Where is Bargain Hunt’s Anita Manning from?

Although she does have political power as the United States Senator, the Task Force has the tools and the skills to fast track an investigation.

It’s also yet to be seen what the motives are behind the case of her missing daughter-in-law.

While it could be a straightforward investigation, there is always a chance there could be a huge twist which could potentially see her daughter-in-law being held for ransom or kidnapped for revenge.

Thankfully for fans, Teddy Brimley (Teddy Coluca) will also be making his comeback to screens for the episode titled ‘Eva Mason’.

The show released some first-look images, ahead of the episode’s premiere which featured a snap of Brimley.

He made his first appearance in season one where he was introduced as an interrogator after questioning Meera Malik (Parminder Nagra) for her part in the attack which took place at the Post Office.

However, she was clean as Brimley discovered she was being used as a mole to pass on information to Anslo Garrick (Ritchie Coster)

Although Brimley looked as though he wouldn’t hurt a fly, he had a very unconventional way of interrogating answers out of people.

Viewers have watched in shock as he has used several unique methods of torture to do so.

He also used animals to torture people, most famously a goat, llama and camel.

After working with Red Raymond (James Spader) for over 19 years Brimley has become a trusted member of his external team.

Brimley was also hard to miss as he used an oxygen tank to get through the day due to his multiple medical conditions,

He lived with hypoxemia, congestive heart failure, diabetes, and asthma.

While it’s yet to be seen who Brimley will be questioning, it could be linked with the case of Panabaker’s missing daughter-in-law.

Fans will have to stay tuned to find out what method of torture he will supply.

The Blacklist is available on NBC in the US. A UK release date is yet to be announced.