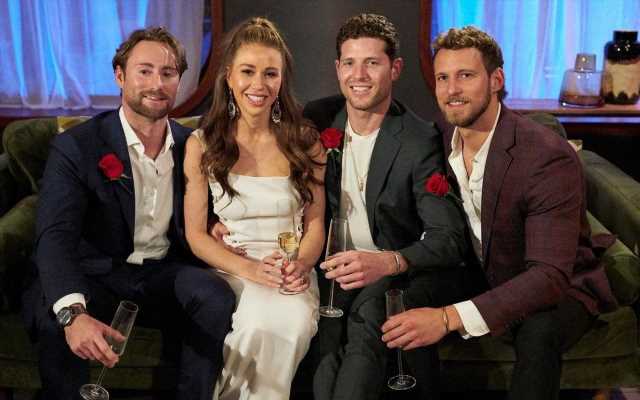 Airing on Monday, August 22, the new episode featured Rachel and Gabby Windey hoping that after meeting their men’s families, it will help them find clarity and possibly even a confession of love.

AceShowbiz -The new episode of “The Bachelorette” saw Rachel Recchia and Gabby Windey visiting their men’s hometowns. Airing on Monday, August 22, the outing featured the ladies hoping that after meeting their families, it would help them find clarity and possibly even a confession of love.

Kicking off the episode, Gabby visited the hometowns of her three men, Jason, Johnny and Erich. She headed to Jason’s in New Orleans first. The pair met Jason’s dad in the park and his father brought flowers for her. When Jason spent some time alone with his dad, he told his dad that he and Gabby had an electric connection. His dad also saw that his son was happy, calm and at ease when he’s with Gabby.

Later, Gabby and Jason went over to see Jason’s mother. His mother, Karen, told Gabby that she saw something really good and cute when the two of them were together. She really hoped for the best for the two of them. While chatting with his mom, Jason said that getting engaged was not realistic for him. He needed time to think about this and he told his mom that he’s planning to have a conversation with Gabby about this matter.

As for Rachel, she went to see Zach and his family in Anaheim, CA. The two enjoyed a bicycle ride before reminiscing their childhoods together. She then met Zach’s family and his parents were apparently concerned about how fast and hard Zach is falling for Rachel.

Gabby’s next Hometown Date was in Palm Beach, Florida where she met Johnny and his family. Johnny’s dad John really liked Gabby and he hoped that she’s the one for his son. Meanwhile, Johnny’s mom Elizabeth told Gabby that Johnny doesn’t give his heart to anyone. However, Johnny revealed to his mom that he didn’t know if he’s ready to propose to Gabby.

Rachel then headed to Wildwood, NJ to meet with Tyler and his family. Rachel acknowledged that her connection with Tyler wasn’t as big as hers with her other men. She wanted to back out of her Hometown Date, but felt like maybe she wasn’t giving him a fair chance. However, she eventually eliminated Tyler and broke his heart before she met his family.

Meanwhile, Gabby met Erich and his family for her last Hometown Date in New Jersey. She was nervous to meet Erich’s dad as he has been battling cancer for three years. At Erich’s family home, she met his mother and family as well as his grandparents. As Erich sat with his mom, his mom said that she could see how Gabby meant a lot to him.

Gabby and Erich’s mom then had a talk about his dad’s incredible will to live. She also told Gabby that commitment is really important to her family. The meeting made Gabby realize her true feelings for Erich. Later when they were alone, she told him that she’s falling in love with him.

For her last Hometown Date, Rachel was in Santa Clarita, California to meet Tino and his family. She met his mother, father and brother when she arrived at his family home. Tino’s mom and dad appeared to be skeptical about their whirlwind relationship and it made Rachel nervous. She even looked like she was about to cry after being grilled by his mom and dad. Meanwhile, Tino told her that he’s falling in love with her and Rachel said that she felt the same.