Survivor‘s latest eliminated castaway departed with some fairly poignant words: “It’s not supposed to be easy, ’cause nothing good ever is.” Truer words, my friends.

On Wednesday’s episode, an advantage once again became a disadvantage, when Shan (cue the music!) convinced JD to hand over his extra vote for the second time. While Genie seemed to be the likely vote-off, having JD’s advantage in hand got Shan’s wheels turning, and the Mafia pastor from Toronto weighed the option of turning on her ally and reaping the benefits of one beautiful backstab.

Did she pull the trigger? Read on for a full recap of Episode 4.

TEACH A MAN TO FISH… | Genie’s pissed she was in the dark on last week’s Brad vote, but Shan reveals that Brad had a secret advantage he didn’t tell ally Genie about. This causes JD’s ears to perk up. Last week Shan had “raked him over the coals” for keeping his advantage secret, when Shan was also withholding information from him. Good for JD for sticking up for himself and calling her out! He, of course, reclaims his extra vote from Shan’s clutches… for now.

For their first reward challenge, players must roll a ball down a track and whip through a small ropes course to catch it on the other side. Then, they must dig through sand to crawl under a beam, before landing their balls on a high platform at the end. Heather can’t seem to figure out the track deal, causing Luvu to quickly fall out of it. Ua destroys the competition, winning time with a Fijian local who teaches them how to properly live off the land. Yase, meanwhile, earns a single fish to split among them. 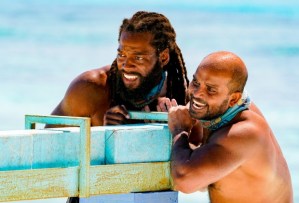 Despite the fact that Heather single-handedly loses the challenge for Luvu, she’s warmly embraced by her tribe for never giving up. Seeing how kind her tribe is to her — especially Danny — in her moment of weakness is heartwarming, even as she drops to the ground in tears. In Survivor (and in real life, too), you can’t ever give up. You gotta keep truckin’. She does just that, and should be proud.

LUVU | Erica, the self-proclaimed “lion dressed as a lamb,” says she’s OK with losing the next immunity. She’s ready to show her teeth and kick someone to the curb. Yes, Heather might be their weakest link, but Sydney is an emotional player and “a bit nasty,” according to the pint-sized lioness. Deshawn, however, thinks Erica is “a little bit sus,” and trusts Sydney far more. Deshawn spills Erica’s tea to Sydney, who tells us, “I’m the threat of threats. I’m savvy as hell, I’m good looking, I’m a physical threat…” (She’s modest, too!) It’s smart of Deshawn to pit the two ladies against each other. Should Luvu head to Tribal, he’s covering his bases and keeping the target on other people. You’ve got to respect that hustle.

Deshawn hints to Danny that he wants to throw the challenge to get Erica out, but the former pro-footballer says that would be a “sin.” If there’s one thing we know from Survivor seasons past, it’s that throwing challenges will always come back to bite you.

IMMUNITY IS BACK UP FOR GRABS | Players must race through the water collecting three bags of blocks, which will help them procure a key. The key unlocks a set of rings. Toss the rings on a series of targets, win immunity.

Danny tells us that he and Deshawn did decide to throw the challenge, but Yase sucking so hard makes it increasingly difficult for Luvu to lose. Jeff (that rabble-rouser!) even calls Luvu out for moving through the challenge as if they’re on a picnic. Danny continues half-assing it, but a clueless Naseer has no idea there’s a sabotage mission in motion. After Deshawn purposely misses multiple tosses, Naseer steps up to the plate and wins immunity for Luvu, shortly after Yase lands all of theirs. Ua is heading back to Tribal Council. 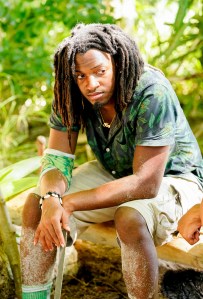 STRATEGY | Genie tells JD that she’s thinking of playing her Shot in the Dark. She asks him if he would vote Ricard so she can gamble her vote away, but JD runs straight to Ricard to blab. Shan worries that JD will work with Genie, and since she knows about his extra vote advantage, she starts scheming. She purposely tells JD that she thinks he’s plotting against her, but really, it’s a ploy to get him to hand over his advantage again. AND HE DOES.

JD, JD, JD! Shouldn’t Shan trust you enough based on your olive branch from last week? And do you really trust that Shan isn’t going to write down your name? Because in the very next scene, that’s exactly what she’s considering! Honestly? That’s the move here, and Shan would be stupid not to capitalize on it. She tells us she loves JD like a little brother, but as we all know, being nice to people — even those you care for — doesn’t win you $1M.

THE TRIBE HAS SPOKEN | Genie tells Jeff she’s playing from the bottom, and the poor woman does look pretty defeated. She knows her Shot in the Dark is her last chance at surviving, but JD warns against it. It could potentially screw over someone who’s willing to work with her, he says. If she’s voted out tonight, Probst asks Genie what she’ll miss about the experience. “These guys,” she says with watery eyes. “We’re beaten down to our bare bones and emotion. A lot of it is exhaustion, and a lot of it is because I truly believe we’ve bonded.”

With that, it’s time to vote. JD votes for Genie, but we don’t see Genie use her die. Why wouldn’t the show make a meal out of that unless…

JD is shockingly voted out. Shan made the move. She did the thing. And now, she’s the new owner of JD’s extra vote advantage.

Was that the right play for Shan and Ricard? Are you gutted for JD? Let your feelings fly in the Comments!