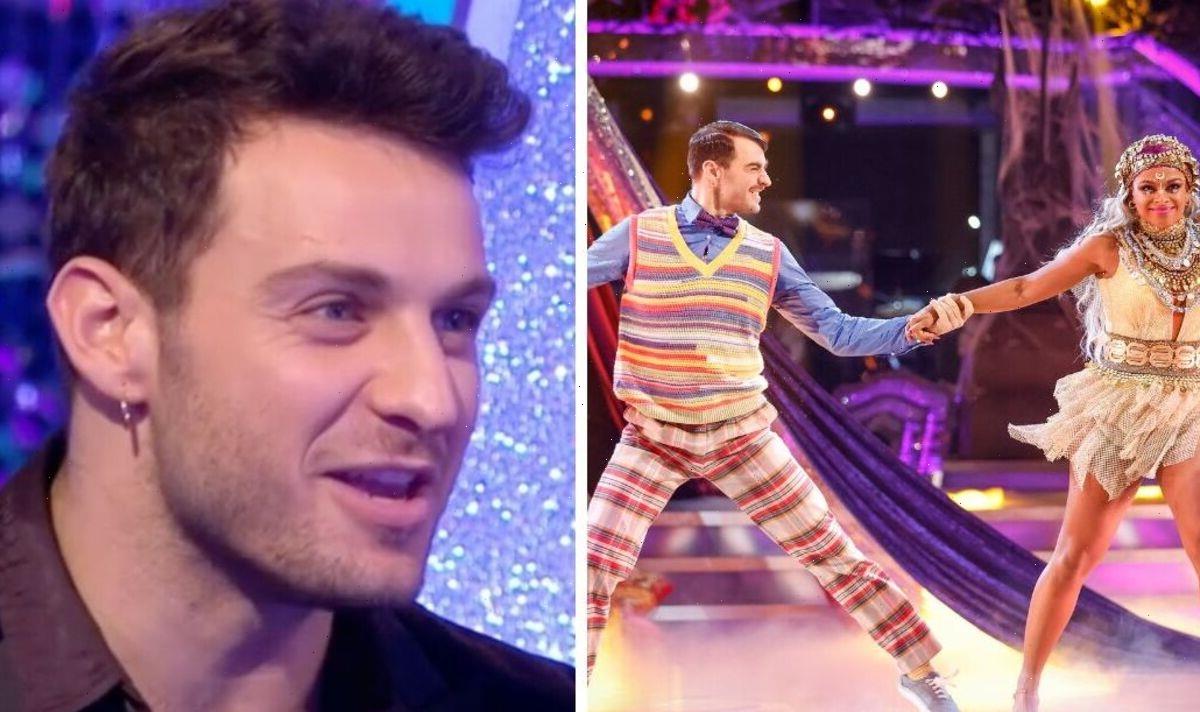 On Tuesday’s instalment of Strictly’s spin-off show, It Takes Two, celebrity contestant Fleur East appeared alongside her professional partner Vito Coppola. During the conversation they spoke to presenter Rylan Clark about their routine which scored them a total of 32 from the judges.

Deciding to up the risk by adding lifts into their performance, judges Craig Revel Horwood, Motsi Mabuse, Shirley Ballas and Anton Du Beke gave them a total score of 32, the same as the previous week.

Despite their high score, the duo found themselves in the dance-off once again alongside EastEnders star James Bye.

Speaking about getting the same score two weeks in a row, Vito seemed less than impressed after adding more risks into their routine.

The duo, who were saved from leaving the show by the judges, appeared on Tuesday’s instalment of It Takes Two to speak about their Halloween routine.

Highlighting they got 32 once again, Rylan asked if there was a part of them that wished they’d been given a higher mark.

Fleur replied: “You know what, I think because we took more risks and it was a lot more dangerous and a lot more challenging, I was happy.”

However, Vito didn’t seem to share the same outlook as his celebrity partner as he thought they’d get a higher mark.

He added: “Usually you’re not focused on the numbers but this time we tried to risk more with the choreography, with the routine and with the lifts.

“It was quite challenging, so we kind of expected a little bit more, but anyway it’s ok, we’re ok with the judges’ scores.”

Although Fleur and Vito are currently seventh on the Strictly leaderboard, behind Molly Rainford and Carlos Gu they once again were fighting to stay in the competition.

Speaking about being in the dance-off again, after going against radio DJ Richie Anderson in week three, Fleur confessed it was harder this time around.

She told Rylan: “I think each week you go through, you work really hard, the further you get in the competition the more you want to stay. I’m having the most amazing time.

“We love dancing with each other, so as soon as you get that red light you think, ‘Oh my gosh is this it, could we be going now?’

Fleur told the BBC presenter she was grateful that all four judges chose to save her and Vito so they can continue to dance in the competition.

This weekend fans will get to see the star dance the Waltz to Elton John’s I Guess That’s Why They Call It The Blues.

Strictly’s official Twitter revealed the dances and routines that viewers will get to see the remaining 10 stars perform in week seven.

While comedian Ellie and Johannes, who are at joint top of the leaderboard with Tyler, are performing the Rumba to the song Alone by Heart.

Tony Adams and Katya Jones also appeared on It Takes Two as they celebrated Tony’s success during Halloween Week, which he hopes to replicate with another upbeat dance.

Strictly Come Dancing continues this weekend on BBC One at 7pm