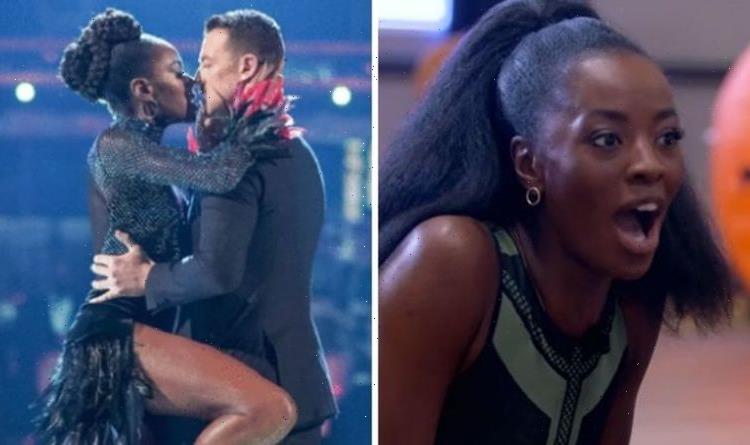 Strictly Come Dancing fans have watched AJ and Kai throughout the BBC series, with many speculating about the closeness of their relationship. On Saturday night, before AJ took to the dance floor, she was grilled by her nieces and nephews about her time in the competition so far. However, things took an unexpected turn when AJ’s nephew asked his aunty to kiss her dance partner, Kai.

Host Claudia Winkleman also caused a stir when she quizzed the duo on the nature of their relationship.

However, body language expert Judi James has taken a closer look at that awkward moment.

The expert claimed the duo “performed a very over-exaggerated display of shock”.

“Both AJ and Kai the first time, both throwing their heads back and opening their mouths as though the very idea had never occurred to them, which looked suspicious in itself,” the expert said speaking in an interview with Metro.co.uk.

She continued: “With Claudia though, AJ looked teasingly open to going public, turning to wrap her arms around Kai and use eye contact to suggest she might be up for an off-dancefloor repeat of their choreographed near-kiss of the week before.”

Judi went on to comment on the moment Kai kissed AJ on the hand.

She claimed he “cheated horribly” when he chose to kiss the back of her hand instead of her cheek or lips.

Ahead of Saturday night’s Halloween special, AJ sat down with her nieces and nephews who asked her questions about her time on Strictly.

AJ’s niece Marta asked: “Are you enjoying being on Strictly?”

This led one of AJ’s nephew’s to ask: “Why don’t you just kiss him?”

AJ and Kai were clearly taken aback by his suggestion and burst out laughing.

After performing their sultry dance, host Claudia said: “I would like to say on behalf of your nephew, who we all fell in love with.

“If you wanted to kiss at any point now… come on Kai!

“Goodness me you tease!” Claudia added, with AJ remarking: “How exciting.”

When it came to the judge’s scores, Kai and Aj received a score of 37, the highest total they have ever got from the judges.

To celebrate their result, Kai teased fans by giving AJ three kisses on the hand.

“Thank you very much for that!” Claudia told the duo.

“I’m so happy, I’m so happy,” AJ exclaimed after receiving a score of nine from Craig Revel Horwood.

Strictly Come Dancing airs on Sunday at 7.15pm on BBC One.