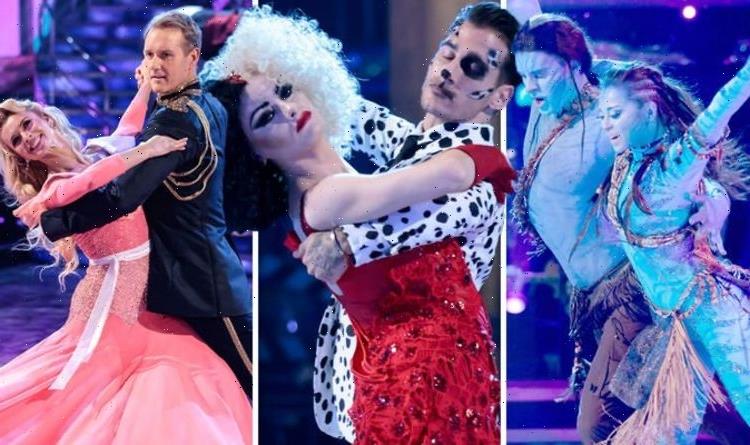 Strictly Come Dancing’s Movie Week brought some surprises, with contestants who were previously favourites diving to the bottom of the leaderboard whilst the first 10s of the series were given. On Sunday evening, the next celebrity will leave the show after former EastEnders actress Nina Wadia bowed out last weekend alongside her professional partner, Neil Jones. With the live show turning the bookmakers’ odds on their head, it seems another soap star could be making an early exit. Here is everything you need to know about the next elimination on the BBC dance show.

Who is the next favourite to leave Strictly Come Dancing?

Going into week three of the competition, it was actor and producer Greg Wise who seemed like he was going to leave alongside his partner, Karen Hauer.

Though, performing a Paso Doble to the James Bond theme tune could have saved him as the judges launched him up the leaderboard.

Others, such as swimmer Adam Peaty and BBC Breakfast host, Dan Walker, found themselves being dragged to the bottom.

However, according to the latest odds from Ladbrokes bookmakers, it seems Coronation Street and Hollyoaks actress, Katie McGlynn is in the firing line.

Her chances of being eliminated with professional dancer Gorka Marquez are at 7/4, putting her at the top of the list.

Greg is still in the running to make an exit as he is holding the second place position to leave at 4/1, matching the odds of comedian, Robert Webb.

Adam and Dan are also in the danger zone as both their chances of making an early exit lie at 8/1 following their Rumba and Foxtrot respectively.

Spokesperson for Ladbrokes, Jessica O’Reilly said: “Katie didn’t quite hit fifth gear once again and punters are piling into her odds of leaving.

“However after a shocking start to the show it could be Dan who’s waltzing out of the competition this weekend.”

Katie took to the dance floor to perform an American Smooth as the character of Cruella De Ville, whilst Gorka dressed up as a Dalmatian.

The judges seemed pleased with the routine and commended the actress for dusting herself off after being in the bottom two last weekend.

She was praised highly for adopting the villainous characterisation of the Disney fiend and the panel noticed she had improved on her performance skills.

As a result, she was awarded a total score of 24 out of 40, which was a marked improvement on last week’s points.

Shortly after she finished her stint on the show for week three, Katie took to her social media platforms to discuss her performance.

In view of her 106,800 followers on Twitter, the actress shared a video of herself being transformed and captioned it with: “Cruella, darling.

“It’s @bbcstrictly time!! And it’s Movie Week! I had so much fun this week with @gorkamarquez1 – if you enjoy our performance tonight we’d love your support #strictly.”

On the other end of the odds table, it seems John Whaite and his partner, Johannes Radebe, are the ones to beat.

On Saturday evening, they took to the dance floor to perform a Paso Doble to He’s a Pirate by Klaus Badelt, from Pirates of the Caribbean.

They weren’t expecting the scores they got as not only did they get awarded one 10, they were given three, taking their score to 39 out of 40.

Their odds of winning the show have now climbed to 2/1, with Ladbrokes spokesperson Jessica adding: “John and Johannes wowed on Saturday evening and after finishing top of the leaderboard with 39 points it should come as no surprise to see them top the betting.”