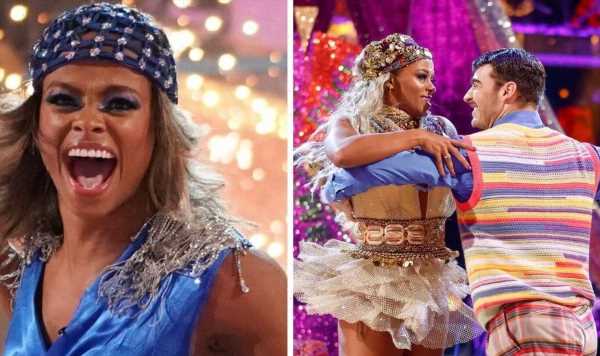 The songs for week seven of the BBC dance competition have been announced with the remaining 10 stars hoping to wow the judges with their routines. However, now Strictly Come Dancing fans have learned the song that Fleur East will be performing her Waltz to, they fear she could be in the dance-off once again.

This weekend the remaining 10 stars of Strictly Come Dancing will take to the dancefloor once again to try and impress judges Craig Revel Horwood, Motsi Mabuse, Shirley Ballas and Anton Du Beke.

Although it was James’ first time in the bottom two, it was a unanimous decision between the judges to save Fleur over him

However, with the show’s official Twitter sharing the routines and songs that the remaining couples will be dancing to in week seven, viewers fear the former X Factor star will be in the dance-off once again.

Doing the Waltz to Elton John’s I Guess That’s Why They Call It The Blues, viewers are questioning the combination.

Marcela commented: “That’s Fleur in the DO again, what an odd song choice”

“I HOPE FLEUR IS NOT IN THE DANCE OFF AGAIN,” added Eoghan O Brien.

Minnie Wright commented: “It’ll be Ellie T and Fleur in the dance off this weekend then. Kym lives to dance another day thanks to a fortuitously timed Argentine Tango. And Tony doing I Know You Want Me? I’m all in. #StrictlyComeDancing.”

Dylan shared: “Based on the dances I think we’re looking at an Ellie T vs Fleur or Ellie S dance off #Strictly.”

Currently, Fleur and her Strictly partner are seventh on the leaderboard after receiving a score of 32 for their Halloween routine.

The 35-year-old danced the Salsa to Break My Soul by Beyonce last Saturday while James and Amy failed to impress with their Charleston to Bumble Bee by LaVern Baker.

When presenter Tess Daly confirmed James’ exit, he had nothing but kind words to say about Fleur.

He said: “I’ve said this from the beginning, all I can do is go out there and do my best.

“I’ve danced against Fleur East, I went out there and gave it my best but she is phenomenal, so I was up against it anyway.

“I’ve had the best time on the show, I’ve got a friend for life [Amy] and all I can do is thank the family, I’ve got a new family [Strictly cast].”

James fell to the bottom of the leaderboard in week six with a score of 27 out of a possible 40.

However, on the other end of the scale, both Ellie Taylor and Johannes Radebe and Tyler West and Dianne Buswell are currently in joint first place with a score of 35.

This weekend, Tyler and Dianne will be doing the Waltz to Seal’s song I’ve Been Loving You Too Long, while Ellie and Johannes are performing the Rumba to the song Alone by Heart.

Other routines on Saturday include Tony Adams doing the Salsa to Pitbull’s I Know You Want Me and Helen Skelton dancing the Jive to Jonelle Manae’s Tightrope.

Strictly Come Dancing continues this weekend on BBC One at 7pm