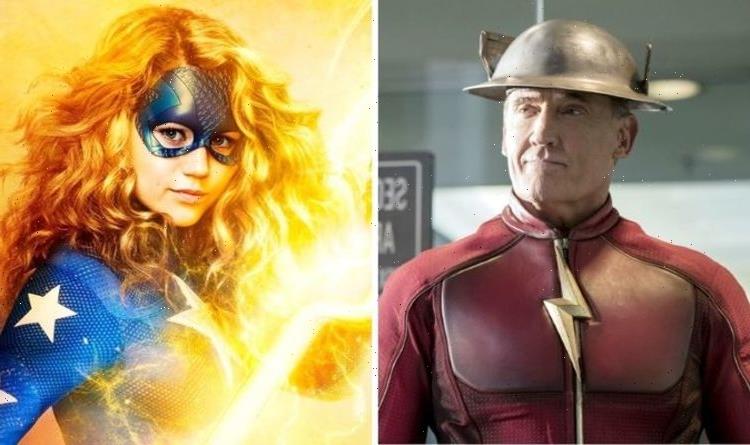 DC Comics’ high school superhero drama Stargirl has finally returned after its breathtaking first season finale last year. Now airing on its new home on The CW, the comic book series’ latest episode has made several references to the network’s popular ‘Arrowverse’ after it was confirmed The Flash star John Wesley Shipp would be making an appearance.

Now the Marvel multiverse has blown wide open with Loki and this week’s premiere of What If…?, DC have stepped up the competition with several gigantic crossovers of their own already lined up.

In Stargirl’s season premiere, Courtney Whitmore/Stargirl (played by Brec Bassinger) and the Justice Society of America are still recuperating from their battle with the ISA.

A tussle with a school bully lands Courtney in deep trouble with her father, ex-hero Pat/S.T.R.I.P.E. (Luke Wilson) and she’s forced to hang up her Cosmic Staff for two weeks.

Unfortunately, this could spell trouble for the JSA, as the man claiming to be Sylvester Pemberton/Starman (Joel McHale) is still hunting down his old sidekick.

Now the series has switched over to The CW, the JSA could come into contact with a number of heroes and villains from the overarching comic book universe.

Among the standard high school drama and comic book action fans have come to expect from the series, Chapter One of the show’s ‘Summer School’ season kicked off by establishing some major connections with the Arrowverse.

Several fans theorised that the Per Degaton mentioned by Pat as being banished to an alternate dimension by the Flash could have been the same supervillain portrayed by Cory Grüter-Andrew in Legends of Tomorrow.

It has already been confirmed that classic Flash star John Wesley Shipp will be reprising his role as Jay Garrick in the new season.

As Stargirl takes place on DC’s Earth-2, viewers quickly realised this show’s version of The Flash could be the same Jay Garrick who frequently crosses over to Barry Allen’s (Grant Gustin) timeline.

On Twitter, one fan said: “Am I to assume that we’re speaking of the Jay Garrick we know?!”

And another wrote: “‘The Flash banned him to another timeline.’ Already setting up Jay’s appearance.”

Garrick is set to appear in episode nine of the new season, though it’s unclear whether he’ll be dropping in from another universe or is already part of Stargirl’s world.

With at least one crossover on the way, fans also think Jade’s introduction could lead into Arrow’s John Diggle (David Ramsey) taking up the mantle.

One more fan said: “Is this going to be how Diggle gets the Green Lantern power? Taking a trip to an alternate Earth?”

Jade’s entry into the series marks the first time a Green Lantern has been depicted in live action since Ryan Reynolds’ 2011 flop, not counting the alien Lantern Yalan Gur’s brief appearance in Zack Snyder’s Justice League.

From just the first instalment of Stargirl’s Summer School follow-up, it’s clear to see DC Comics enthusiasts are in for a treat over the coming weeks.