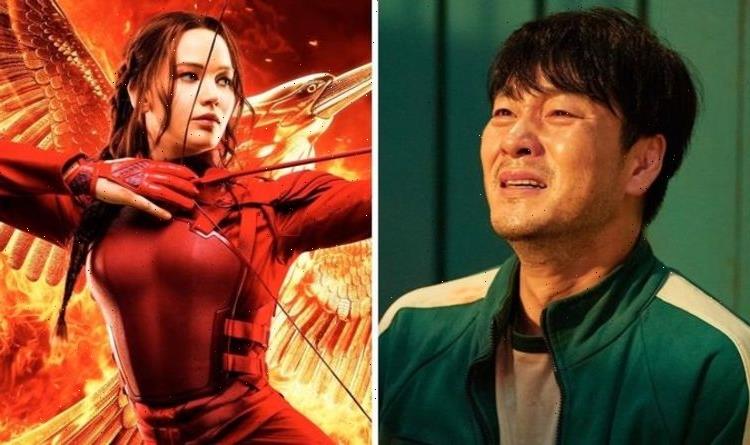 The brand new South Korean thriller has exceeded all expectations and become Netflix’s top new series of 2021. Unfortunately, Squid Game has also seen its fair share of criticisms, with some viewers drawing unfavourable comparisons to other survival properties such as The Hunger Games and Battle Royale.

Starring Lee Jung-jae as down-on-his-luck chauffeur Seong Gi-hun, the South Korean thriller pits over 400 individuals against each other in a sadistic series of children’s games.

The series’ familiar survival-horror trappings, stylistic choices and critiques of capitalism have drawn comparisons to similar franchises such as The Hunger Games and Battle Royale.

Speaking to Variety, Hwang admitted he was heavily inspired by Squid Game’s predecessors, though maintained the series offers its own unique slant.

He recalled: “I freely admit that I’ve had great inspiration from Japanese comics and animation over the years.

“When I started, I was in financial straits myself and spent much time in cafes reading comics including Battle Royale and Liar Game.”

The first series, based on Koushun Takami’s 1999 novel, has been adapted into a manga and a 2000 feature film, which led to a sequel, Battle Royale II: Requiem, in 2003.

An American remake was said to be in the works, but was cancelled upon the release of The Hunger Games.

Much like Squid Game, Suzanne Collins’ trilogy of books, and the subsequent film adaptations starring Jennifer Lawrence, were also maligned by some due to its similarities with Battle Royale.

While the South Korean drama is indebted to what came before, Hwang’s inventive new take on a familiar premise has helped launch the Netflix Original to international success.

He continued: “I came to wonder how I’d feel if I took part in the games myself.

“But I found the games too complex, and for my own work focused instead on using kids’ games.”

Plus, though the style and narrative are very different, the show’s sharply satirical take on modern society has drawn comparisons to other recent South Korean outputs, such as Best Picture winner Parasite.

“But I wanted it to use the kind of characters we’ve all met in real life.”

By keeping the action easy to follow, Netflix subscribers have grown attached to the show’s colorful and relatable cast of characters.

Squid Game may feel familiar to fans of dystopian fiction, but that hasn’t stopped the series from smashing its way to the top of the charts following its release last weekend.

Sadly, Hwang has warned it may take some time for the show to continue, but hopefully its rapidly growing fanbase can help guarantee a second season.

Squid Game is available to stream on Netflix.