It’s rare that four-time Oscar nominee Willem Dafoe gets to do comedy, so a lot of eyes were on Saturday Night Live this week as the actor hosted the show for the first time. Despite a snowstorm, Dafoe showed up and put on a clinic for other film actors whose skills don’t always translate to live TV.

As any parent can tell you, free time alone in the house is a rarity you should take full advantage of. Dafoe, as Belle’s dad, certainly knows that. After checking around the house to make sure nobody else is around, he starts doing all the freaky stuff he couldn’t do with his daughter close by.

After lighting some candles and putting away all of the photos — except, weirdly, a picture of a horse — he puts on some French pop music and begins to dance. Think Christopher Walken in that Fatboy Slim video, but sexier? 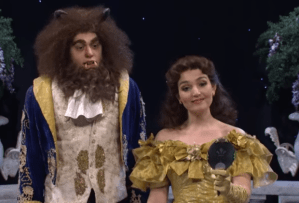 Belle tries to get all the inhabitants of Beast’s castle to stop watching, but they don’t want to. After all, TV didn’t exist back then. What else is there to do? Belle’s dad starts swatting himself with a riding crop. “Aw, I like this dude! He naaaastay!” Mrs. Potts (Punkie Johnson) chimes in.

After a brief moment of sad reverie with his dead wife’s picture, things go off the rails again. He remembers holding her, kissing her, and her spanking and biting him, all before Belle smashes the mirror in embarrassment.

In addition to a stellar performance from Dafoe, Pete Davidson fans surely got one of their fantasies fulfilled seeing the comedian done up as the Beast. He’s almost unrecognizable under the makeup until he drops into his signature snark early in the sketch. Also, surely there’s someone out there with a fetish for Mikey Day as a candlestick or Kyle Mooney as a cup?

So how’d Willem Dafoe do? Grade the episode in our poll below, then fire away in the Comments!