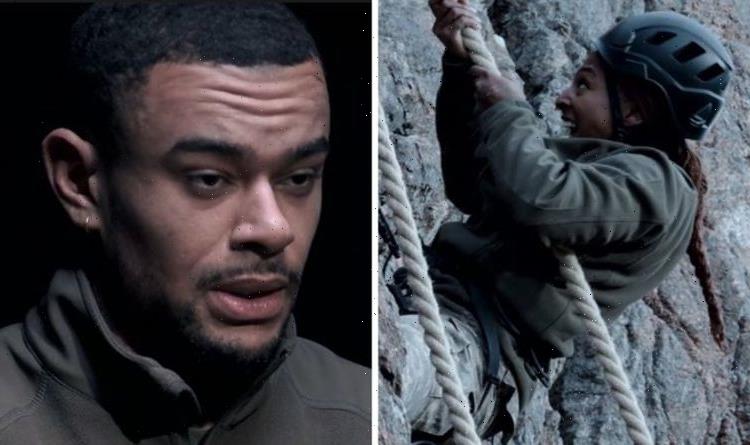 The third season of Celebrity SAS: Who Dares Wins will see 12 celebrities pushing themselves to the limits on the Channel 4 show in order to see what they can accomplish. Express.co.uk spoke to some of the contestants, including former footballer Kieron Dyer, singer Jake Quickenden, Paralympian athlete Aled Davies, former bicycler Shanaze Reade and reality star Wes Nelson. While discussing the many intense challenges that were filmed, Kieron admitted some scenes had to be axed from the show due to injuries suffered.

Jake, 32, had been talking to Express.co.uk and other media about how he enjoyed doing pair work, but sadly viewers won’t be able to see what he was referring to as the scenes have been axed.

“I enjoyed all the runs to the challenges,” the former X Factor contestant started.

“Because that’s where I was kind of good. I loved the pair work, when we got paired up.”

“They had to cut the pairs out because of the injuries and stuff,” commented Kieron.

“There was a good bit when someone I got partnered with – you have to tell them their weaknesses as an individual.

“You have to look them in the eye. And I say to my partner – I say ‘Your biggest weakness is your arrogance’.

“And that would have been good TV to watch – I don’t think that will be in.”

The 42-year-old also recalled making Jake “cry” with a prank.

“I took off my armband and pretended I was quitting.

“Told all the contestants in the barracks, I said: ‘I’ve had enough, I’m out of here.’

“And they obviously took it literally.

“Shanaze came and gave me a big hug, and Jake started crying, and then I had to get my armband and put it back on and say ‘I’m only joking’.”

When asked why he wanted to take part in the show, Kieron explained: “Mine was on the mental aspect of the show.

“Not so much physical. I’m a guy who’s a glass half empty.

“That was trying to maybe change your mindset to be in a glass half full, have a positive outlook rather than seek out the negatives.”

In response to the same question, Shanaze agreed: “Definitely, for the mental aspects and just to uncover parts of me that I need more work on.”

Celebrity SAS: Who Dares Wins airs on Sunday at 9pm on Channel 4.