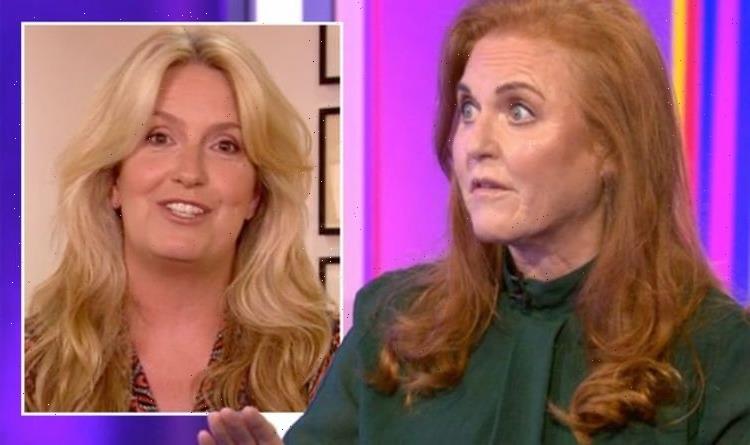 TV presenter and model Penny Lancaster joined Alex Jones and Gethin Jones on Monday’s The One Show to discuss all about her upcoming stint on Celebrity Masterchef alongside former footballer Dion Dublin. And the famous pair weren’t alone as Sarah Ferguson was also in the BBC studio to reveal all about her debut novel coming to bookshelves. However, when Penny delved into the details about her new role as a special constable in the police force away from the world of showbiz, the Duchess of York was full of admiration for Rod Stewart’s other half.

After a discussion about Team GB’s performance in the Olympic Games in Tokyo, Japan, Alex turned her attention to the late hour Penny has been putting in with the police.

“Penny, obviously it’s all happening in Tokyo during the night,” Alex segued. “But you’re on shift because you’re a special constable.

Turning to Sarah, Alex continued: “Right, we talked about this, Sarah, last time Penny was on, and you’re super passionate about it.

“Now you’ve had a few months, well maybe a year since we saw you last, in the job, how’s it going?”

Penny replied: “Yes, I got my official badge, sworn to the Crown, (and) I’ve been out on six shifts now.

“It’s really exciting, I absolutely love it, it’s one of the biggest thrills of my week,

“Just connecting with the public daily and the face to face recognition with people out on the street, making them feel secure and safer,

“And then hopefully dealing with some of the baddies and getting them off the street too.”

Everyone in the studio was full of admiration for Penny as Alex praised: “It’s really good that you’re just actually doing it.”

And The One Show host wasn’t alone as the Duchess of York weighed in to share her own tribute to Penny’s hard work.

“So brave,” she began. “Penny, it’s just so incredible, you’re so brave. You really are.”

Penny was grateful for the royal’s kind words, as she replied: “I appreciate that, thanks.”

As the conversation moved on, Penny went on to explain why she decided to join Dion as part of this year’s Celebrity MasterChef line-up.

“Where were you in terms of a level of chef coming into this?” Gethin asked, prompting Penny to reply: “You couldn’t use chef and my name together, no.

“I cook in the kitchen sometimes, but Rod’s – I mean, we’re both fortunate that we’ve had a chef.

“But with lockdown it was now down to mummy,” she explained. “And for all of the bad things that happened with lockdown, one of the good things was coming together as a family.

“And when my boys were asked what was the good thing about lockdown, they said mummy’s cooking.

“Then the show idea came my way and there was homeschooling, so I wonder what I was going to choose: homeschooling or Masterchef?”

Fans will be able to see how Dion, Penny and the rest of the star-studded line-up get on in the kitchen when Celebrity MasterChef kicks off next week.