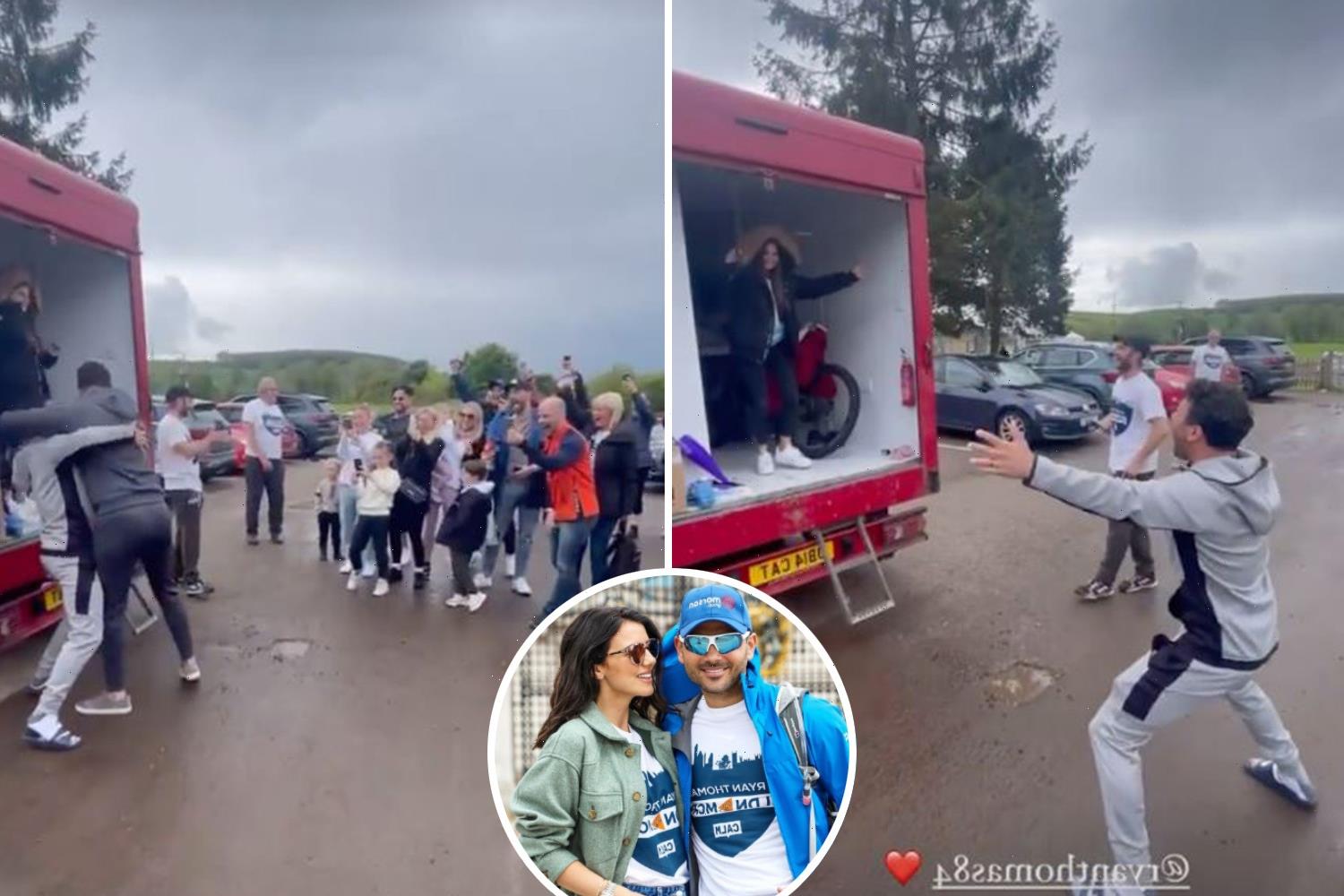 EMOTIONAL Ryan Thomas has been surprised by his daughter Scarlett after trekking 78 miles in a bid to raise awareness of male suicide.

The 34-year-old actor was seen getting tearful and smiling wide as his twelve-year-old daughter appeared in the back of a van to surprise him. 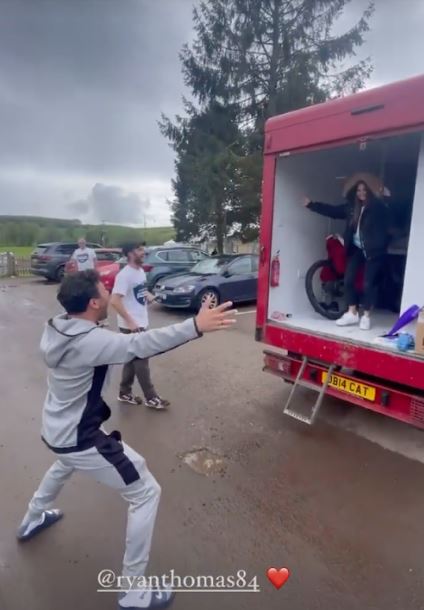 As he completed his seventh day of walking, his younger brother Scott gathered his friends and family to surprise Ryan at the finish point.

Scott filmed as Ryan hobbled alongside a crowd of clapping fans before being told to stand in front of a large truck for a surprise.

Scarlett opened her arms out wide as the truck door was opened to reveal her inside, with Ryan screaming with joy as he spotted his daughter. 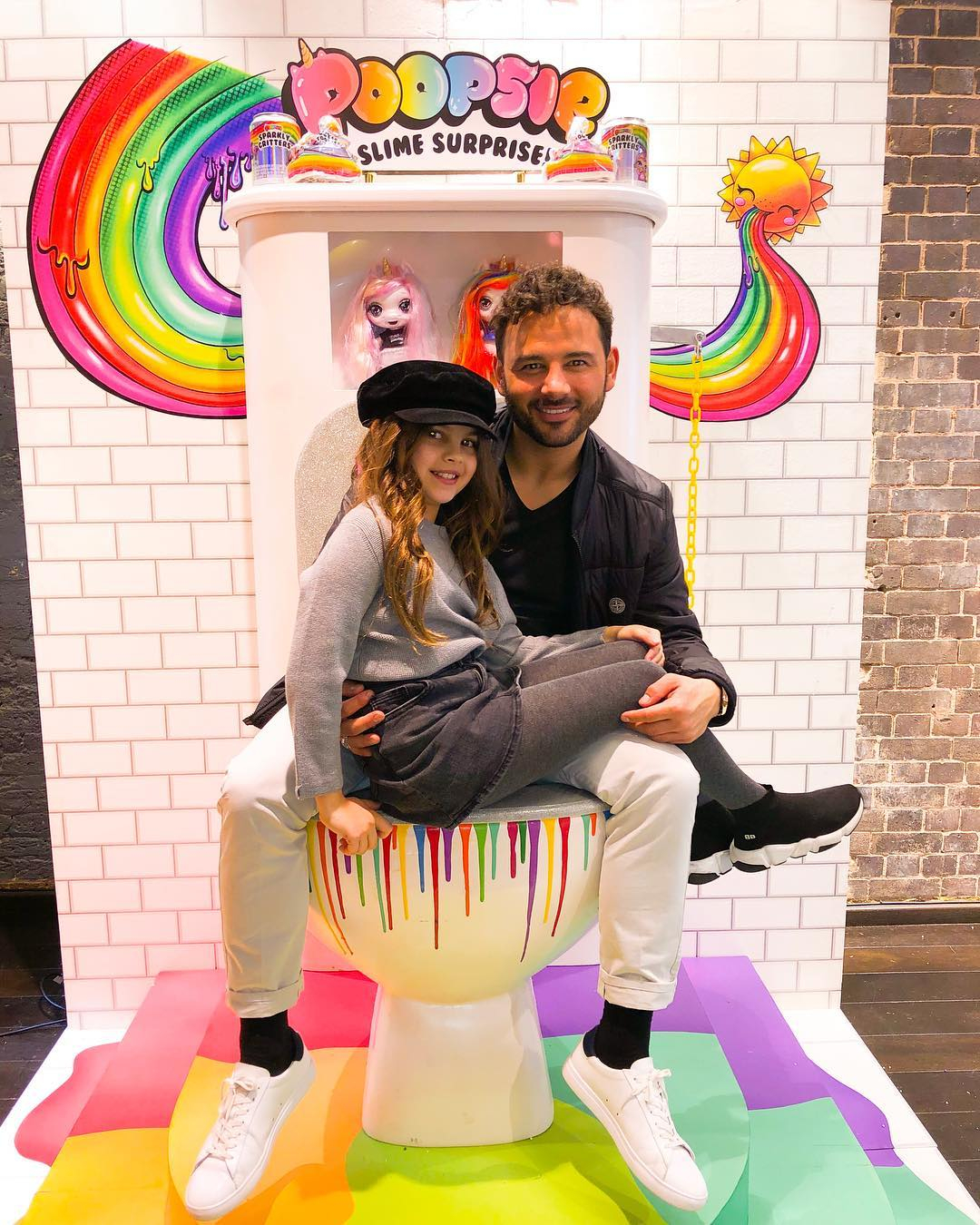 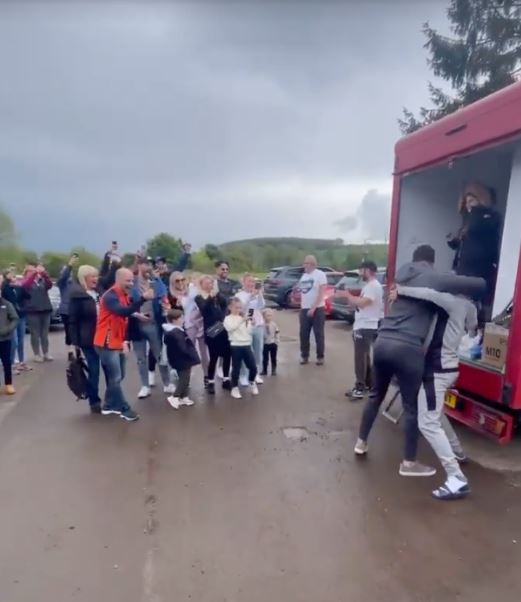 Placing his hands over his face, the star appeared to wipe away tears as he wrapped his arms around the youngster and lifted her from the vehicle.

While Ryan's back was turned, the rest of his friends and family gathered to shout "surprise" – seeing the soap star almost knocked off his feet.

Laughing and smiling, the Neighbours actor hugged his other brother Adam, as well as his mum Gail, who looked on proud.

"Ah mum, I love you," Ryan could be heard saying as he kissed her on the head and rubbing her back enthusiastically. 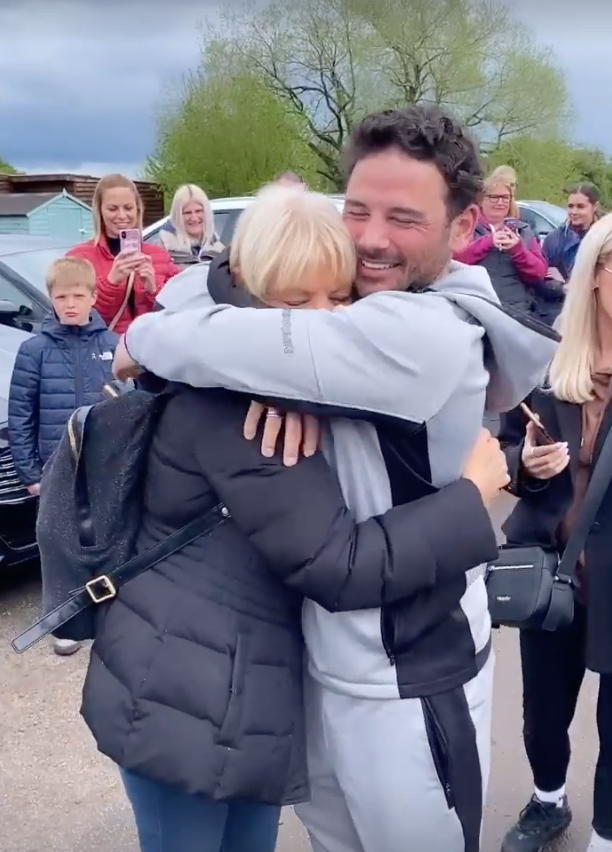 Earlier this week, an exhausted Ryan told fans how the walks have been tougher than he could have ever imagined.

The former Coronation Street star revealed his feet are covered in bubbling blisters as he struggles through the challenge.

But it's not just the physical toll it's taken on his body, as Ryan said the mental challenge of putting one foot in front of the other has been harder than anticipated.

He told The Sun: "It's been tougher than I imagined. I'm exhausted, but I've got to keep focused." 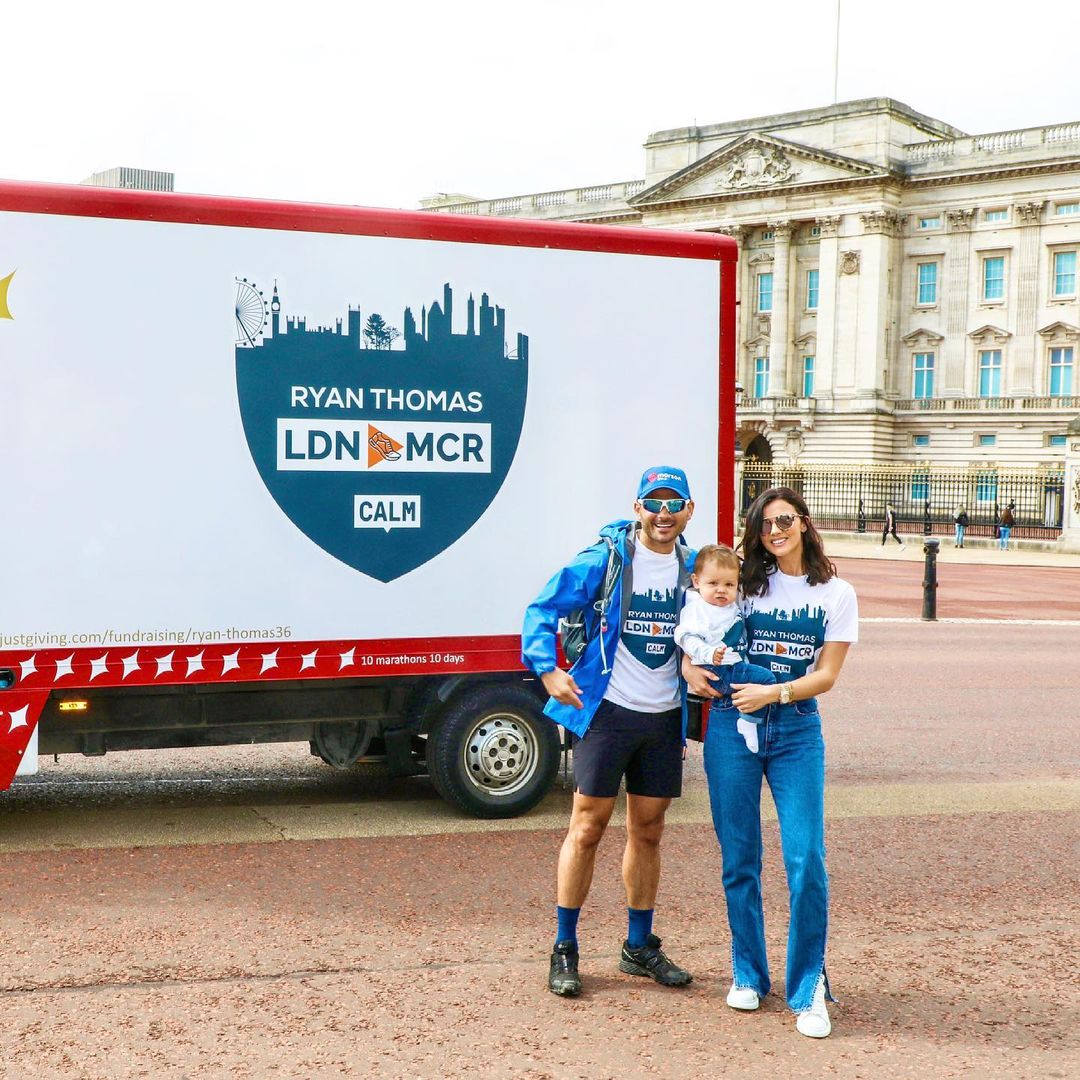 Despite the pain, Ryan is making every step count towards raising £50,000 as he travels from London to Manchester throughout Mental Health Awareness week.

Ryan is currently racing towards his fundraising target as he heads towards his final destination of Manchester Cathedral on Wednesday, May 19.

Yesterday as he passed through Milton Keynes on his journey alongside his model pal Matt Peacock, Ryan was cheered up by some familiar faces to give him the boost he needed. 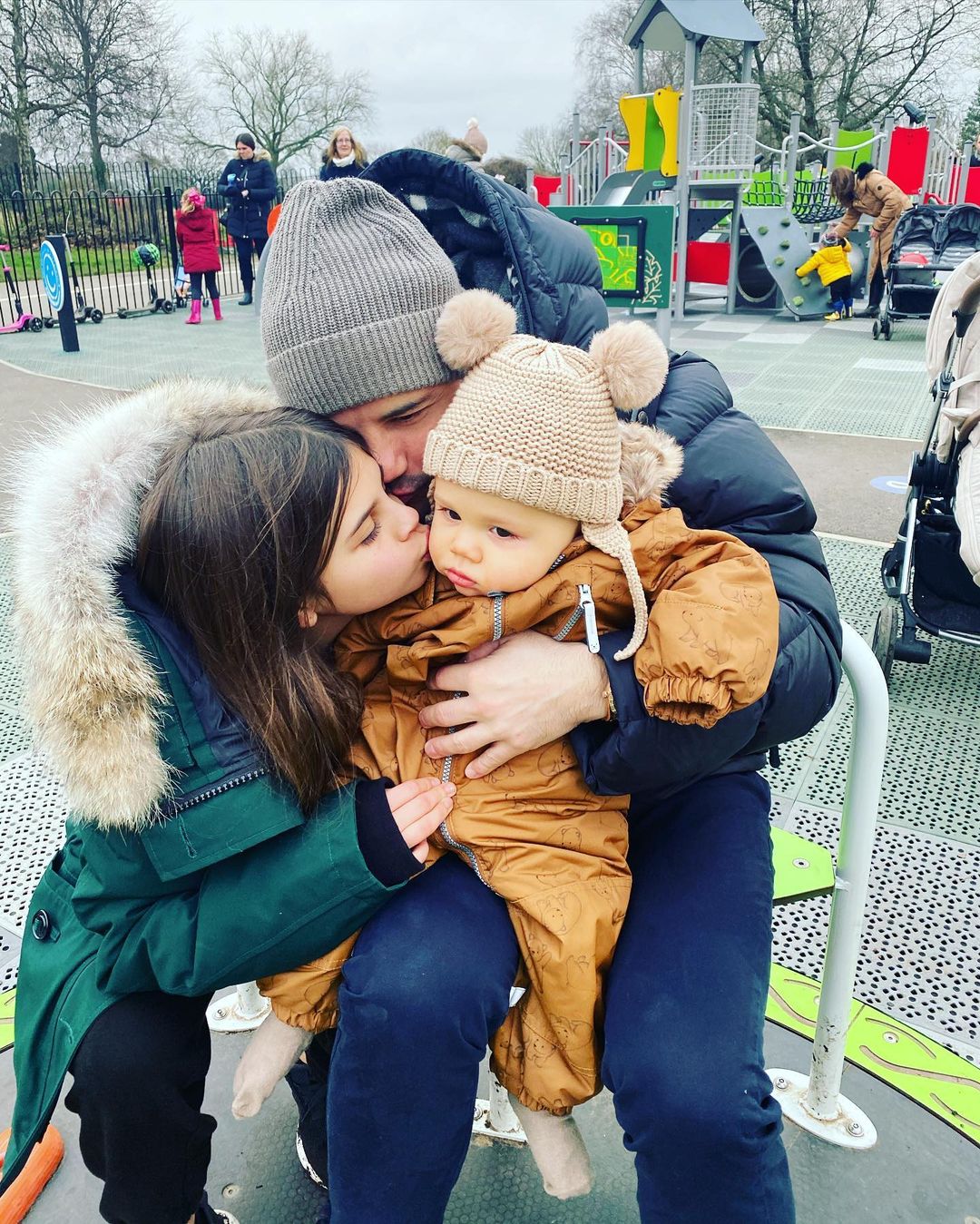 Ryan said: "It's been an incredible experience already and I'm so thankful to everyone who has turned out to support me along the way.

"Day three has been the best day so far with my friends coming out to support me, they've really lifted my spirits."

The singer said she was a "proud mum" as her daughters Willow and Maple held up handmade signs for Ryan as she cradled her youngest Senna.

Seeing his friends turn out to cheer him on gave Ryan the boost he needed after he admitted feeling"awful" after completing day two.

He told fans: "Sorry I was so quiet. I didn't even have the energy to celebrate day two. I was in so much pain, mentally and physically.

"I really did hit a wall in the last two hours and felt like it went on forever."

Now he's back raring to go as he celebrates being another 26 miles closer to his hometown of Manchester where he'll be reunited with his fiancee Lucy Mecklenburgh and their son Roman.