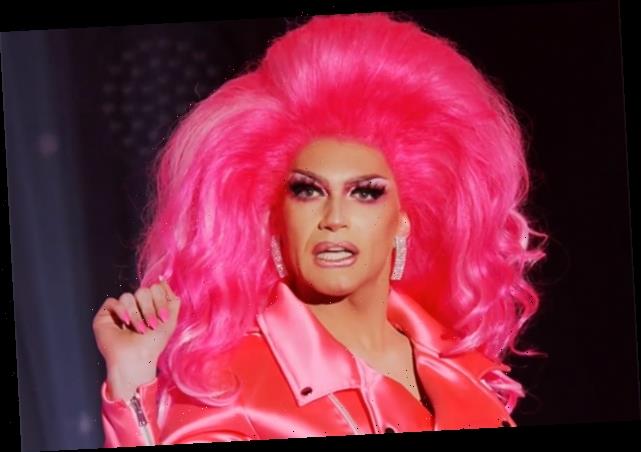 RuPaul’s Drag Race followed all sorts of new safety protocols with its Season 13 premiere: not only did the judges remain six feet apart from one another, but Mama Ru socially distanced herself from more than half of the cast. Or did she?

As previously ru-ported, Friday’s premiere kicked off with six lip sync battles, forcing all 13 contestants to fight for a spot in the competition mere moments after entering the werkroom. But before move on to the second game-changing twist of the night, let’s see how everyone fared on the main stage: 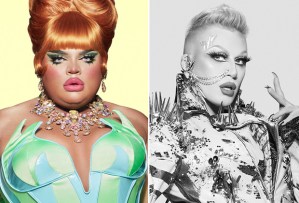 KANDY MUSE vs. JOEY JAY | This first match-up didn’t take anyone by surprise — at least not anyone who watched the video VH1 released earlier this week. New York native Kandy Muse was the first to enter the werkroom, dressed in head-to-toe denim (with a denim boom box to match, naturally). She was followed by Arizona queen Joey Jay, the self-described “dumbest bitch you’ll ever meet.” After exchanging awkward pleasantries, the first two contestants of Season 13 made their way to the main stage for the first of six game-changing lip sync battles. Both queens turned it out, but only Kandy was sent through to safety, while Joey was sent… well, I’ll get to that in a little bit. 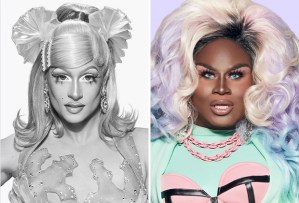 DENALI vs. LALA RI | “Icy, spicy and a little bit dicey,” Denali literally skated her way into the werkroom (those poor floors!) and instantly proclaimed herself “drag’s gold medal bitch.” And the Windy City queen wasn’t the least bit impressed by her competition, Atlanta’s LaLa Ri, who described herself to the judges as “an Olive Garden pasta with Popeyes chicken tenders on the side for razzle dazzle.” For the record, anyone who looks at chicken tenders and thinks “razzle dazzle” is instantly OK in my book, so I was thrilled — if not also a little surprised — to watch her beat Denali in a lip sync to the Pussycat Dolls’ “When I Grow Up.” (Side note: I rolled my eyes a little bit when Ross Mathews saw Denali and said, “Just when I thought we couldn’t get any gayer, now we have figure skating.” The blatant Milk erasure!) 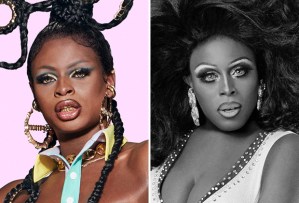 SYMONE vs. TAMISHA IMAN | Round three pit “ebony enchantress” Symone against the “sassy and lovable” Tamisha Iman, the latter of whom was cast in Season 12 shortly before being diagnosed with Stage 3 colon cancer. There was a time during her recovery that she couldn’t even walk, but she’s a fighter, something she reminded the world by standing her own against Symone to the tune of Janet Jackson’s “The Pleasure Principle.” Sure, Symone came out on top (“This is not her Janet Jackson moment — it’s mine!“), but Tamisha put up a good fight. The extreme Jasmine Masters vibe she gave off with that suit was merely a bonus. 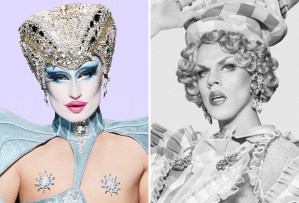 GOTTMIK vs. UTICA QUEEN | All eyes are on Gottmik this season, and not just because the celebrity makeup artist has beat such illustrious mugs as Cindy Crawford, Heidi Klum and Paris Hilton. “I’m a transgender man,” Gottmik explained upon entering the werkroom. “So… born a girl, transitioned into a guy, dress like a girl for money — very that.” Once Lindsay Lohan’s “Rumors” started blasting on the main stage (YES, by the way!), Gottmik made quick work of Utica Queen, who accurately described herself as both a booger-eating supermodel and one of those *deep breath* wacky waving inflatable arm-flailing tube men you see at car dealerships. 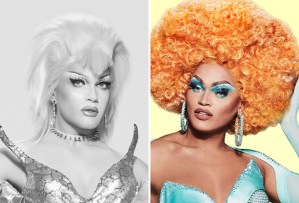 ROSE vs. OLIVIA LUX | We can all agree that Rosé — who sings alongside Season 12 stand-out Jan in the girl group Stephanie’s Child — gave herself the kiss of death by smugly stating, “I usually win.” (It was also an ironic statement, considering she boasted about being on The Voice and America’s Got Talent… neither of which she won.) Despite being born at the intersection of “Wit Avenue and Fashion Boulevard,” Rosé was bested by relative newbie Olivia Lux, who was truly feeling her oats during Elle King’s “Ex’s and Oh’s.” The energy! The Ru-veal! It was all very good. Well, not for Rosé. 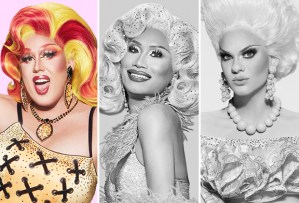 TINA BURNER vs. KAHMORA HALL vs. ELLIOTT WITH 2 TS | Because this ridiculous premiere was basically porn for Drag Race fans, it only made sense to end it with a three-way. “Ancient” New York queen Tina Burner, the delightfully shady Kahmora Hall — yes, Season 12 winner Jaida Essence Hall is her big sister! — and Elliott With 2 Ts (better known as “a housewife with a secret”) duked it out to “Lady Marmalade,” easily the best song choice in an evening full of wonderful song choices. (Can you imagine how wild people would be going at the bars for these? Actually, I don’t even want to think about it. It’s way too depressing.) Elliott turned it out, and Kahmora looked great in that Bob Mackie original, but Tina absolutely swallowed them with her stage presence, sending her through to continue her Season 13 journey.

While the members of “Team Talent” were busy patting themselves on the back, the queens who lost their lip syncs — all of whom were seated below a wall of pork chops, from Dahlia Sin and Miss Vanjie to the OG herself — were treated to the second major gag of the evening. “All is not lost,” Ru announced. “You all have a chance to return to the competition. But first, you must give one of your fellow queens the cop. Let the voting begin!”

That’s right, Ru is leaving it up to the seven potential pork chops to decide upon a single sacrificial lamb. And now that the question has been asked, it’s time for you to weigh in with your thoughts. Vote for the queen you would choose to send packing in our poll below, then drop a comment with your thoughts on the Season 13 premiere.