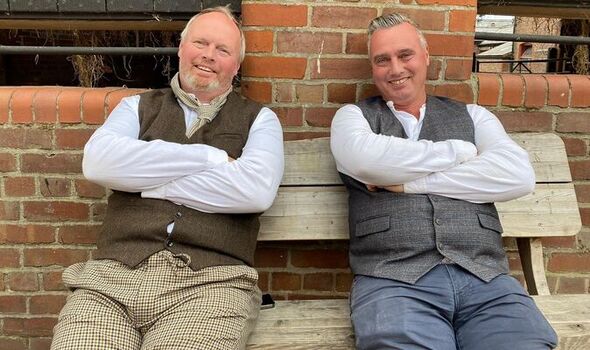 The brothers, who run Cannon Hall Farm in Barnsley, say eating “wonky” vegetables and making soups from leftovers are just two of the ideas people should consider. Both were popular during the Second World War when Britons faced rationing.

The pair are fronting a new three-part series called A Farm Through Time, which looks at historic farming practices, including those in the war.

They have also called on the Government to prioritise British farmers and come up with a 20-year plan to support the industry.

Meanwhile, Rob has revealed he is recovering from a heart scare. The 54-year-old was treated for atrial fibrillation (an irregular heart rate) earlier this month and is now on “lighter duties” on the farm.

He said: “We need to learn from the war and eat wonky vegetables. Wartime definitely taught us to waste nothing and value everything. That is something we probably lost in a generation or less.

“Going back to what happened during the war brings it home to you.

“Food wasn’t a given. You couldn’t take it for granted like we can now.

“Now you can go to the supermarket and pretty much get everything you want – and food is cheaper now than it’s ever been.

“People spend less money on food, if you exclude eating out, than they’ve ever done as a percentage of their wages. In the war they made the most of everything and people have forgotten that. But the way things are going, it won’t be long before people stop throwing things out of the fridge because they won’t be able to afford to.

“We can learn from our parents and grandparents. To this day my dad doesn’t waste a thing – if it goes on his plate it’s eaten, if it goes in the fridge he turns it into something, and gradually I’ve turned into him.

“I eat up what’s in the fridge and if I’ve got veg I will chop it up and make a soup. I am becoming more traditional in my ways.

“People shop with their eyes, don’t they? They want that perfect carrot.

“But we need to tell people to buy British and buy wonky and nutritionally, the wonkier the better. It won’t be any worse.”

The brothers, who are still helped by their father Roger, say their adult children now know the cost of living, batch cook and always turn their lights off.

And on the need for a long-term plan to help UK farmers, Rob said: “I’m not convinced farming is on top of anyone’s list, to be honest. I just hope we don’t go through a period where people have to go hungry for it to become important again.

“I think we need a really good plan and to stick to it for 20 years. We need to work really smart to maintain our standard of living, and need long-term really good solutions.”

Regarding his recent heart scare, Rob said: “I was taken to Barnsley Hospital. I was given electric shock treatment to calibrate my heart to the right rhythm and it was all done within a couple of hours of my feeling poorly.

“When I first had this feeling I thought, ‘is this what a heart attack feels like?’.

“You’re trying to keep calm because panicking isn’t going to help. When I passed out I knew it really was something and I needed to get to a place with someone cleverer than me to tell me what was happening.

“I’m on slightly lighter duties and I’m not going out in the hot sun and digging holes.

“I’m being as productive as I can, but being a bit sensible as well.