Be careful: There’s a witch in Riverdale… more than one, actually.

Tuesday’s episode saw Cheryl tend to a dying Nana Rose while recalling two previous generations of Blossom women, both also played by Madelaine Petsch: Abigail, an 1890s schoolmarm who takes a liking to new teacher Thomasina (a past version of Toni); and Poppy, a 1950s housewife whose relationship advice ruffles the feathers of the local husbands. (Poppy also shared an illicit kiss with a ’50s version of Betty!) Both Abigail and Poppy met unhappy ends — a murderous warlock killed Thomasina and put a curse on Abigail, and Poppy was placed under house arrest for being a communist sympathizer — but that’s nothing that a little magic can’t fix.

Enter Sabrina Spellman (played once again by Chilling Adventures of Sabrina star Kiernan Shipka), who’s an old friend of Cheryl’s — yes, we learned that Miss Blossom is a witch, too — and offered to assist with a spell. As a once-in-a-lifetime comet passed through the sky, they transferred Nana Rose’s spirit into Cheryl’s body, and vice versa… only we learned Cheryl was actually Abigail (and Poppy), who was made immortal by the warlock’s curse. So Nana Rose can live on in Cheryl’s body, and Abigail can reunite with her beloved Thomasina in the afterlife.

That was a lot to process, so we turned to Petsch for help making sense of it all. Read on as she talks about playing three different Blossoms, her favorite vintage costume to wear, Cheryl’s friendship with Sabrina — and if that ending could be a glimmer of hope for “Choni” fans.

TVLINE | This five-episode “Rivervale” event feels like it was tailor-made for Cheryl Blossom, with all the supernatural stuff going on. How much fun has this been for you to play?
Oh, for sure. I mean, every episode’s been a different journey since Season 1 for Cheryl, so I’ve always had a good time with her. But this five-episode event… I feel like we’re really pushing the limits when it comes to what we can do, and that’s something I’m really happy with this season. We’re really leaning into what our show is. I feel like we’re finally settled into, “Oh, it can be all these things, and we don’t have to worry about what that means.” It’s been a grand old time for me, personally. Lots of murders. I kill multiple people! 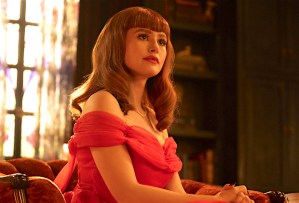 TVLINE | This week, you played three different Blossom women across three different centuries. How did you make Abigail distinct from Poppy, and distinct from Cheryl?
I worked with a dialect coach for Abigail, so that the placement of my voice was correct for the 1800s. That was a great way to differentiate her. But also, there’s a softness and a naïveté to Abigail that I brought to that character, and then once Poppy comes along, Poppy has a little bit more of an edge to her, especially towards men and the way that women are put in society. There’s more of a chip on Poppy’s shoulder, and her voice is slightly different as well. Cheryl kind of speaks in a higher octave most of the time, or a higher level, and Poppy was a little more into her diaphragm. And Cheryl feels like she can be all of those things. So because of what we find out in that episode, Abigail and Poppy mixed together is Cheryl Blossom.

TVLINE | You got to wear a lot of different costumes as well. What was your favorite to wear? That red wedding dress?
It was not that one! No, that had a lot of layers and pieces to it, and it was really hot the day we shot it, so I was sweating bullets while we were shooting that. My favorite costumes are Abigail’s costumes, because they’re just the most beautiful costumes, and they’re all custom-made. Our costume designer Rebekka [Sorensen-Kjelstrup] is a genius, and they’re all beautifully tailored. I feel like Abigail when I put them on. It’s like with Cheryl, I can’t do any scenes without shoes on. Even if you can’t see my feet, I have to have the shoes on. That’s how I felt with the corset with Abigail. But all of Abigail’s pieces were absolutely stunning. I actually think my favorite is the one where I’m teaching the girls in the classroom and Thomasina comes in and talks to me about the comet, and I’m wearing that red ensemble with the black criss-crosses down the front. That would be my favorite. 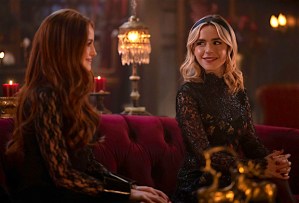 TVLINE | We also learned that Cheryl is friends with Sabrina, which makes a lot of sense. Was there ever any talk about Cheryl appearing on Chilling Adventures of Sabrina while that was still on?
I think that we definitely had discussed it. It was difficult because that show was a Netflix show only, and we’re CW/Netflix, so I don’t know if there was something with that, or if it was just timing. It’s also hard with scheduling. So there definitely was talk, and we also referenced Greendale and they referenced Riverdale often on the show. So it was only a matter of time before one of us came over. I always thought it would be cool if I called Sabrina one day and had her do a seance to try and get Jason to be alive again. I think Cheryl would totally have done that.

TVLINE | Nana Rose passed away, and her spirit entered Cheryl’s body. Is this really goodbye for Nana Rose? I’ll miss her!
I love Nana Rose. Barbara [Wallace] is my favorite. I would say it’s only goodbye for “Rivervale.” Also, no one ever dies in Riverdale. C’mon.

TVLINE | Abigail and Thomasina ended up together in the afterlife, which I’m sure “Choni” ‘shippers will love to see. Is that a hint that those two are still endgame, even though they’re not together right now?
I mean, God, I hope it is! I don’t know, but I hope so. I’m still rooting for them, mostly because I’m Team Cheryl, and I know that Toni is the best for Cheryl. Whether Cheryl is the best for Toni, I don’t know, but I definitely do want them to end up together. I think that Toni taught Cheryl what unconditional love looks like, for the first time in her life.

TVLINE | Going back to Season 5, Cheryl learned that Abigail was burned at the stake by the ancestors of Archie, Betty and Jughead, and she swore revenge against them. Should they still be watching their backs when Season 6 returns?
Absolutely! You are totally on the money. No one is safe. Lots of things are happening. It’s nothing that you would expect. I’ll just say there’s a character in “Rivervale” that you will continue to see in Riverdale, and she has to do with me. That’s all I’ll say.

Got thoughts on tonight’s Riverdale? Grab a booth in the comments to share your thoughts.