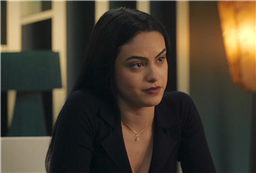 Veronica’s guilty conscience is weighing heavily on her this week on Riverdale — and she unburdens herself to someone close to her.

TVLine has an exclusive sneak peek at Sunday’s episode (The CW, 8/7c), and in it, Veronica takes a long look at herself in the mirror before making a confession to Reggie. Her father Hiram’s body had been found days earlier; he’d been shot in the back of the head four times with his hands zip-tied before his body was burned.

Reggie asks the question we’re all wondering — “Could it be a fake-out?” — but Veronica slams that door shut: “He’s dead. I’m sure he’s dead.” Then Reggie realizes she lied to him when she said she called off the hit on Hiram. To atone for her sins, Veronica is arranging a memorial for her dad at the casino, with her mom and grandmother in attendance.

A stunned Reggie doesn’t know how to react: “Should I say, ‘I’m sorry for your loss,’ or ‘congratulations’?” And Veronica doesn’t know, either.

Elsewhere in Sunday’s episode, entitled “Death at a Funeral”: “Following the explosion at the Andrews residence, Archie assembles a team to help rebuild his home, while Jughead copes with his new reality” and “Britta tries to get to the bottom of some strange happenings going on with Cheryl and Nana Rose.”

Press PLAY above for a first look at Sunday’s Riverdale, and then hit the comments to share your thoughts on Season 6 so far — and that renewal news!