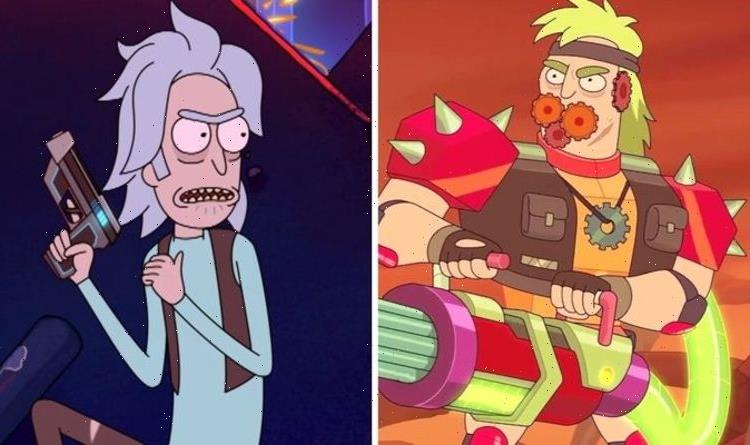 Rick Sanchez has joined forces with his grandson Morty Smith (both played by Justin Roiland) since the very first episode of Rick and Morty. Very little is known about the unhinged inventor’s past life, but all that could be about to change in the next episodes of the Adult Swim comedy.

The first clip from Rick and Morty’s highly anticipated season finale has teased a brand new character could be joining the team.

Adult Swim will air a special Rick and Morty double bill to wrap up the fifth season in early September.

After announcing the show would be taking a short midseason break, the network released a short sequence from the upcoming episodes.

The clip left fans on tenterhooks as Rick fired Morty as his sidekick after discovering his grandson had been tampering with his portal gun.

To berate his awkward adolescent partner, Rick whips out his ‘Wheel of Better Things Than Morty’, which includes the likes of a ‘bag of meat’ and ‘half a Paul Giamatti’.

Some eagle-eyed fans have also spotted the inclusion of ‘Kyle 2.0’, which appears to be a reference to a former associate of Rick’s who was briefly mentioned in the season premiere.

They recalled: “In the first episode of this season, Nimbus implied Rick used to have someone who was like Morty and asked ‘What was his name….. Kyle?’

“Really seems like Rick used to team up with someone – or something – named Kyle.”

A second reference to the mysterious Kyle in the space of one season is a clear sign the character could eventually be introduced.

Fans are already expecting a lore-heavy episode to wrap up the season after more of Rick’s backstory was revealed in the latest outing, ‘Rickternal Friendshine of the Spotless Mort’.

As more pieces of the puzzle start to come together, Kyle could be revealed as Rick’s original partner before he decided to crash with Beth and Jerry (Chris Parnell).

Several theories have already been suggested, such as Kyle being another one of Rick’s grandsons from a timeline where Beth married someone other than Jerry.

There’s also a chance he could be an old friend like Birdperson (Harmon), who fought with Rick during his time as a freedom fighter.

Whatever the case, given Rick and Morty’s sadistic track record, fans are already predicting something tragic will be revealed to have happened to Kyle.

On Reddit, one fan theorised: “Something about the generic name makes ‘Kyle’ feel extra mysterious and makes me think the show will likely never explain who he is.

“I don’t know why but I feel like something horrible happened to him.”

Plot details are being kept under wraps for now, but the rom-com-inspired title of episode nine could suggest fans will finally find out more about Rick’s elusive ex-wife.

Rick and Morty season 5 will conclude on Sunday, September 5 on Adult Swim and the following Monday on Channel 4.