Naga Munchetty and Charlie Stayt hosted BBC Breakfast on Saturday morning and reported on a story about demolitions. However, things took a turn when Charlie went on a bizarre tangent about cartoon characters. Naga poked fun at her co-star, but despaired when meteorologist Sarah Keith-Lucas took Charlie’s side.

Charlie and Naga were discussing a segment about the demolition of chimneys on Saturday’s BBC Breakfast.

However, Naga began giving Charlie a quizzical look when he compared the demolitions to the characteristics of cartoon characters.

Charlie said: “You know when a cartoon character’s legs are running and there’s a moment where he doesn’t start moving and then it starts moving?

“Very much like the roadrunner, thank you. The director just reminded me. It’s exactly that,” he explained, replying to the director who had spoken through his earpiece. 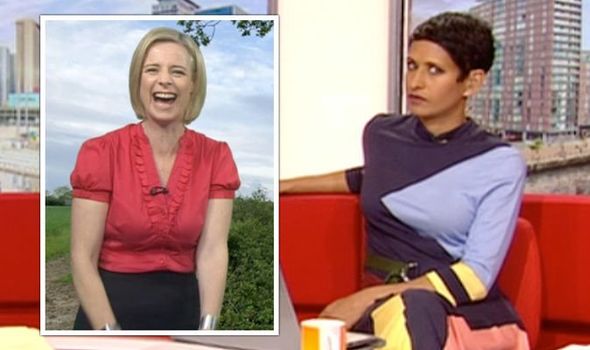 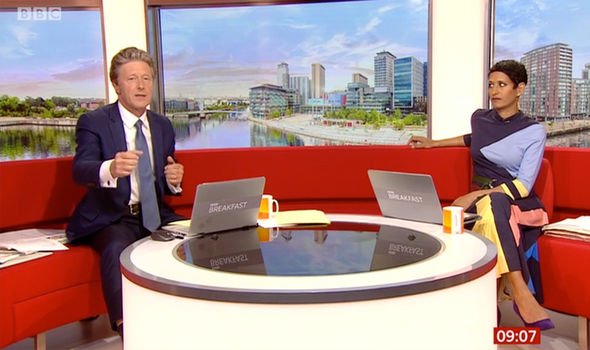 Clearly puzzled by her co-star’s tangent, Naga said: “I’ve got two things to say to you.

“The cartoons aren’t real, the chimneys don’t have feelings so they don’t know and it’s a shame we don’t have that tumbleweed effect,” she joked.

Naga then quickly moved on to the weather, handing over to meteorologist Sarah.

“Can I just say Sarah was biting her lip because she couldn’t believe what you were saying,” Naga said to Charlie. 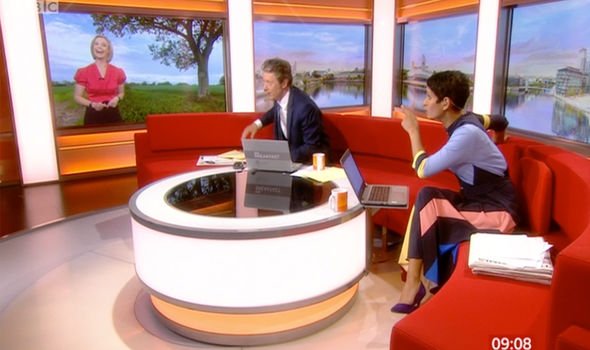 “Yeah I kind of sort of know what you mean Charlie if that helps,” Sarah said, with Naga exclaiming: “Oh Sarah really?”

A delighted Charlie said: “I take that as absolute confirmation. Sarah knows exactly what I was talking about. Thank you Sarah!”

“Thanks Charlie. You can slip me that tenner later on right?” Sarah joked.

Many viewers took to Twitter to defend Charlie, claiming they understood what he meant with his demolition analogy.

One fan wrote: “#BBCBreakfast I get it Charlie! Also, when the cartoon character runs over a cliff, but doesn’t drop until they realise!”

“@BBCBreakfast I think Charlie is also referring to Wylie Coyote being booted off a cliff with his legs still moving before the ominous drop!” A second viewer commented.

A third agreed, saying: “I know what you mean charlie! @BBCBreakfast”

Luckily many viewers saw the funny side of Charlie and Naga’s exchange.

One viewer wrote: “@BBCBreakfast @TVNaga01 and Charlie talking about chimneys being demolished this morning 1. Cartoons aren’t real, 2. Chimneys don’t have feelings had me in stitches”

“Can someone check what’s in Charlie Stayt’s mug this morning @BBCBreakfast” another remarked.

Another fan commented: “Charlie’s roadrunner analogy for demolition! Hahahaha. Naga being a perfect soundboard for the silly fun! Love it! #BBCBreakfast”