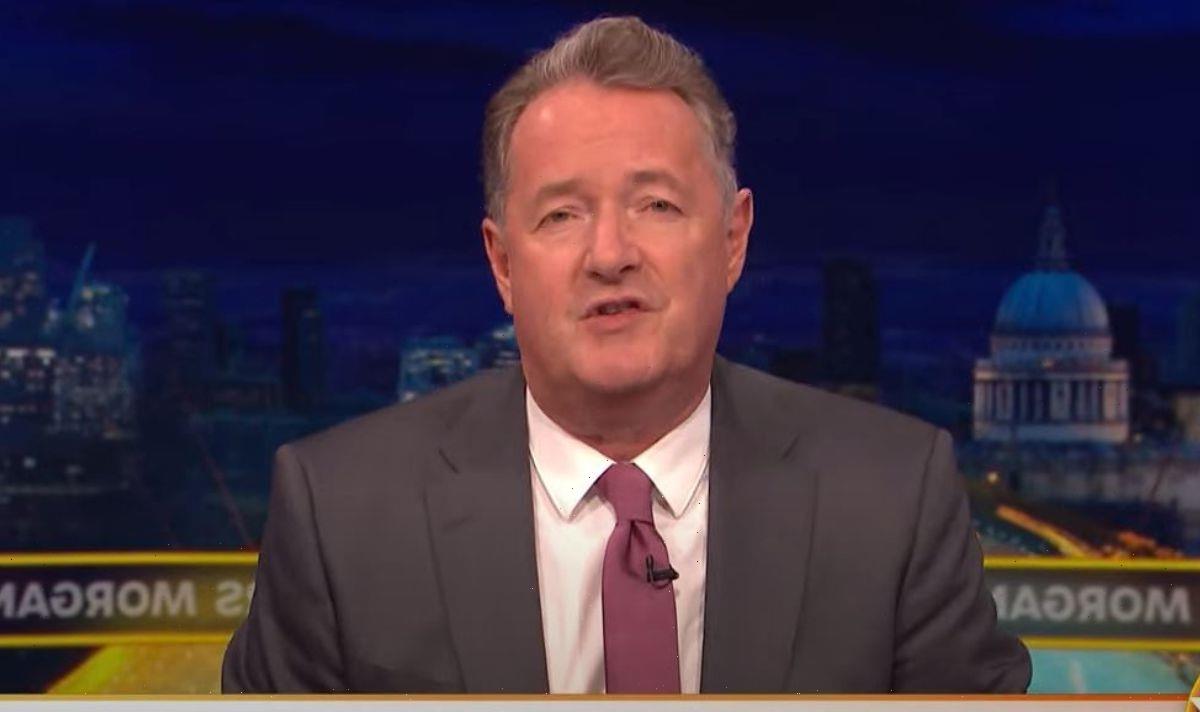 Morgan questions why footballers should have to take the knee

During a debate on his TalkTV show, Piers Morgan: Uncensored, the former Good Morning Britain presenter ranted about what he called “virtue signalling” as companies support Pride month by adding flags and symbols to some of their western social media pages. The broadcaster argued the same brands haven’t done so in other countries where gay people still don’t have equality. During the conversation, the 57-year-old also questioned why white football players were condemned for refusing to take the knee.

The journalist was joined by bisexual activist and writer Lewis Oakley, as well as Fox News contributor Tyrus, to discuss the topic of virtue signalling.

Turning to Lewis, Piers argued: “Here’s my issue about this – I don’t think anybody should be forced to signal their virtue if they don’t wish to.

“And yet we’re seeing more and more pressure now being applied, both by sporting teams and associations and social media, the court of public opinion, to say, ‘If you don’t this you are a bigot and you should be shamed.'”

He asked what it says about the person, to which Piers replied: “Why should it say anything about you?”

He continued: “For example, currently, there are black footballers who don’t want to take the knee anymore, they think it’s lost its steam and impact.

“If they should be allowed to say ‘I’m not going to do it,’ why shouldn’t a white player?

“Without you making the insinuation, ‘Well it says something about you if you don’t.'”

“I don’t think if you’re not going to take the knee or wear the laces that means you’re a bad person,” Lewis argued.

“I just think it means, ‘Okay, there’s a conversation to be had.’

“There are many reasons why someone would not want to wear rainbow laces or wear the Pride thing.

“But we have to ask why? What is it? Is it that you hate the gays and don’t want to see them around, or is it that you think it’s “woke” or mad? Whatever it is.

“That’s where the issue is, we still have to come back to the reason this is being done, right?

“The reason is because we still don’t have any out Premier League footballers, it’s still got that stigma of homophobia in it and we’re just saying, ‘Look, how can we make up for this?’

“This has historically been somewhere where gays or bisexuals were not wanted.”

Earlier, Piers had described why he opposes such gestures, explaining: “Pride month used to be about celebrating gay rights and campaigns for equality, it’s now more about ad campaigns celebrating righteous brands in places where equality often already exists.

“From burgers to banks, machines to marines, apparently bullets are now gay, everybody wants to say it’s okay to be gay, which of course it is! Except where it’s not.

“Big brands love to signal their virtue in English-speaking countries where gay rights have been hard-fought and hard-earned, but not so keen to do it in the Middle East, for example, where it’s often illegal and punishable by death, they don’t really care about LGBTQ.”

He added: “Football’s governing body, FIFA, for example, is flying the rainbow flag at its headquarters a few months before it flies the game’s superstars to the World Cup in Qatar, where gay people are flogged or killed.”