During today’s edition of Good Morning Britain, Piers Morgan hit out Dominic Raab after he compared the Black Lives Matter movement of taking the knee to the television show Game of Thrones. The Foreign Secretary took to Twitter to clarify his comments after a row erupted when he compared the gesture to the HBO drama and said he thought it was a “symbol of subjugation and subordination”. The GMB host slammed Raab and blasted those who defended the Foreign Secretary this morning.

Morgan hit out: “The level of ignorance going on here – and people have to wake up.

“And for people defending Dominic Raab, do not do it by saying ‘well, nobody should force him to take the knee!’.

“Nobody is forcing him to take the knee. He was asked would he do it, he said no he wouldn’t, fine. I respect his view.

“Nobody is forcing him to do it. But to have no comprehension about why people are doing it, when you are the Foreign Secretary, is shameful.” 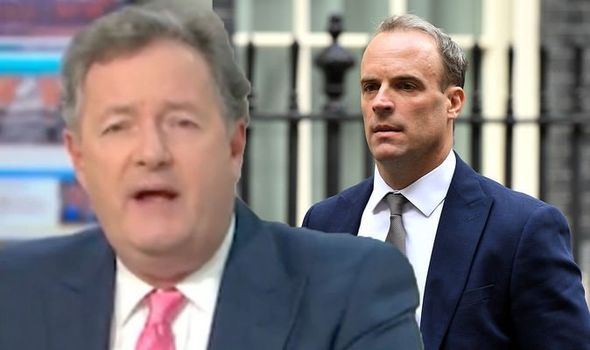 “He needs to acquaint himself with these things or don’t do the job. He represents us around the world,” Morgan continued.

“We would have literally been the laughing stock of the world. This is why it is serious.

“He is not just you, or me, or somebody in the street. He is the Foreign Secretary. Incredible.”