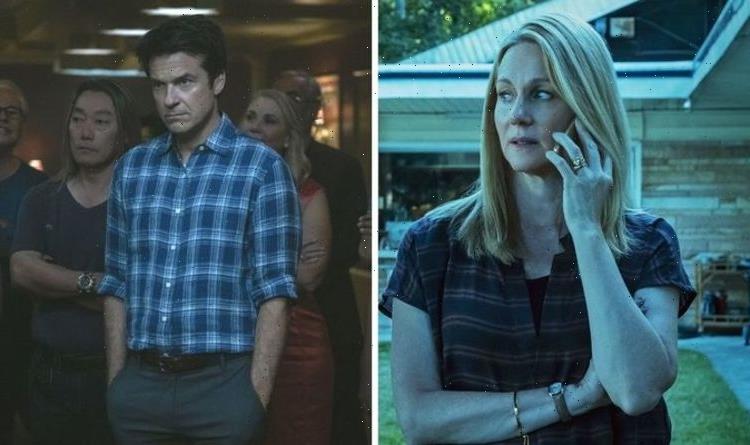 The Netflix crime drama gave fans an insight into the extremely complicated life of Marty Byrde (played by Jason Bateman) as the seemingly normal patriarchal businessman who joined forces with the Mexican drug cartel. However, Ozark fans have spotted an intriguing plot hole from season one with the way Marty runs his business.

In season one Marty was forced to make a life-threatening deal with a cartel member after watching his colleague be shot to death due to a money-laundering scheme gone wrong.

He agreed to wash $500 million in five years in a desperate bid to keep his life.

To do so, he relocated his family from Chicago to the Missouri Ozarks where he assumed there would be no competition.

There he teamed up with local resident Ruth Langmore (Julia Langmore) to help him launder the cash.

In his first attempt to start getting to work, Marty purchased two cash businesses which needed major renovations.

The first was a strip club and then he bought the Blue Cat Lodge Lakeside Inn, which he also used as a front.

In episode six Marty makes an order for new carpet in the Lodge and this is where a fan spotted a plot hole.

Taking to Reddit, the confused viewer wrote: “When Marty invests in the resort he makes it look like he bought more carpet than they needed. I get making it look like someone bought more from you to launder the money.

“The fan continued to question his technique and added: “How though is he supposed to get the clean money if all he’s doing is making it look like he bought more from someone else?”

In response another viewer suggested it was a pretence: “I remember reading or watching something once about crime shows where they said they often either omit details or subtly inject incorrect information.

“In order not to inadvertently educate people how to do it themselves so it wouldn’t surprise me if there are some deliberate inaccuracies as well,” the user added.

Later on in the series, Marty realised those businesses weren’t getting the job done quick enough.

His business partner and wife Wendy Byrde (Laura Linney) decided to purchase a riverboat casino to expand their empire.

Although it took some persuading from the locals this became a perfect front for the family who was desperate to fulfil their promise to the cartel.

As people were continuously spending money, Marty was able to launder the illegal funds at a quicker pace, however, this came with a whole heap of issues.

Including in their marriage, Marty wasn’t prepared to have his wife make decisions for him, so he initially tried to sabotage the casino because he wanted nothing to do with it.

Another fan explained Marty’s methods and stated: “I don’t recall the specifics as it was some years ago, but the money laundering is basically flowing the dirty cash as ‘legit revenue’ once the business is working and declaring it as profit which is now clean.

“Presumably one will need to have expenses at a higher level to match the higher revenue, hence the purchase of more carpet,” they concluded.

Although a release date for season four hasn’t been revealed yet, it was announced this fourth instalment would be the final season of Ozark and it would be split into two parts with seven episodes in each.

Express.co.uk will be updated with any new information about the show’s release.

Ozark seasons 1-3 are available to stream on Netflix.