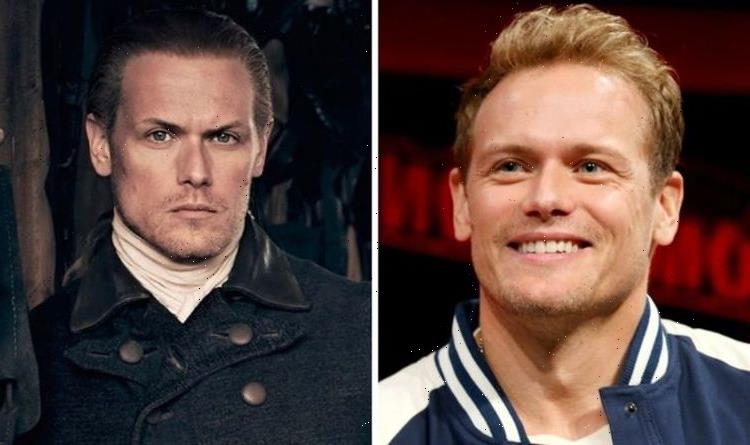 The Jamie Fraser star will next be seen in a star-studded romantic comedy expected to release in cinemas next month. Outlander’s Scottish leading man will be joined by none other than Celine Dion, and Sam teased he may be getting the chance to duet with the legendary singer on Zoe Ball’s BBC Radio 2 show.

Sam was joined by his long-running Outlander co-star Graham McTavish to talk about their upcoming projects on Tuesday morning.

Zoe asked Sam about his upcoming film, Text For You, which is due out next month.

Sam is also joined by Celine in her first major acting role.

He continued: “Celine Dion, I think it’s the first thing she’s acted in. And she is just brilliant. She is really good.”

Graham and Zoe were both surprised Celine had never acted before.

The Outlander star teased: “She may sing. Other people may sing as well.”

His revelation prompted stunned responses from Zoe and Graham, who were eager to hear more.

The actor’s iconic character Jamie Fraser has sung some traditional Highland tunes and even danced, throughout the first five seasons of Outlander.

However, Sam’s upcoming role in Text For You could be the first time he has taken on a fully musical role.

Based on a 2016 German film of the same name, it’s still unknown just how much Celine’s singing will factor in the English-language remake.

As the proposed release date of December 21 is just around the corner, hopefully, Sam’s fans can get their first glimpse of his new project very soon.

Unfortunately, Graham wasn’t convinced his vocal talents could match up to his famous co-star.

When Zoe asked if he could sing, Graham hesitated for several moments.

He finally said: “Well, ‘sing’ is such a subjective word, isn’t it?

“It’s sort of like the cry of some sort of wounded animal.”

Graham and Sam have remained frequent collaborators over the years, despite the former returning to Outlander for just one episode in the last season.

On Zoe’s Tuesday show they also teased a secretive fourth project, for which they were unable to spill any details.

Plus, Graham will be playing a major role in the upcoming Game of Thrones prequel House of the Dragon, and may even pop up for another cameo in the next season of Outlander.